It's been a long and winding road this week... Crazy busy and very emotional. Jacob cut his first two teeth, my sister-in-law Cindy got bad news from her oncologist, and I'm working fast & furious on finishing her Comforting Words quilt to send out to her in California to take to her chemo appointments that start next week. A bright spot earlier this week was when Jacob came dressed in his new Abbey Road onesie the same day I had put on my new Abbey Road t-shirt! I love when things like this happen. :-) 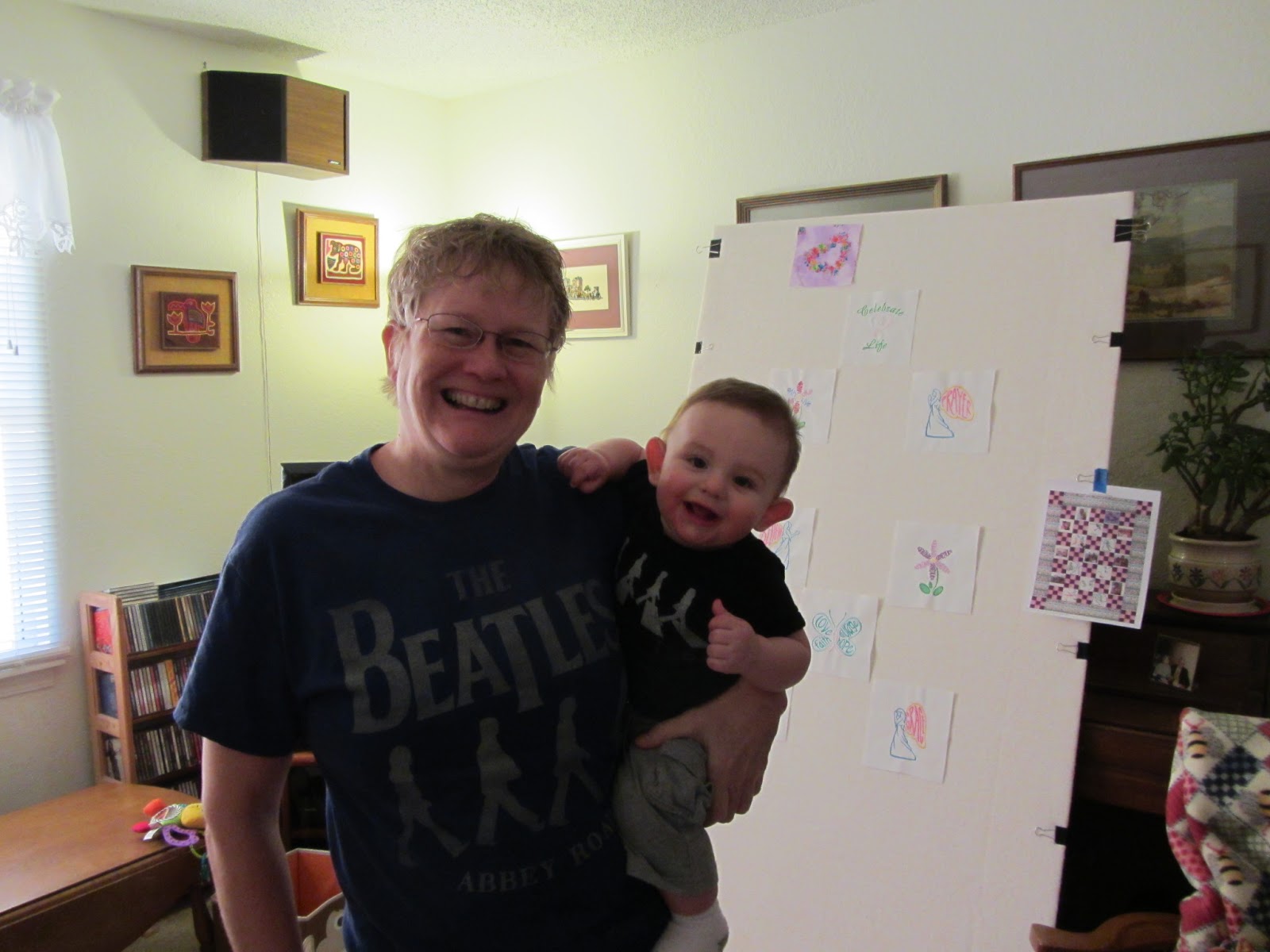 So, the projects for this week include machine embroidery, photo transfer, and, yes, lots of piecing and quilting. First off was a new onesie for Jacob's little friend, Mattie, who turned 1 on Feb 2. Her mom planned a wonderful first birthday party with a Very Hungry Caterpillar theme that unfortunately got cancelled and rescheduled due to the flu hitting their home. I still got her birthday onesie done and delivered and she'll be wearing it for her first birthday portraits later this week now that everyone is over the flu. 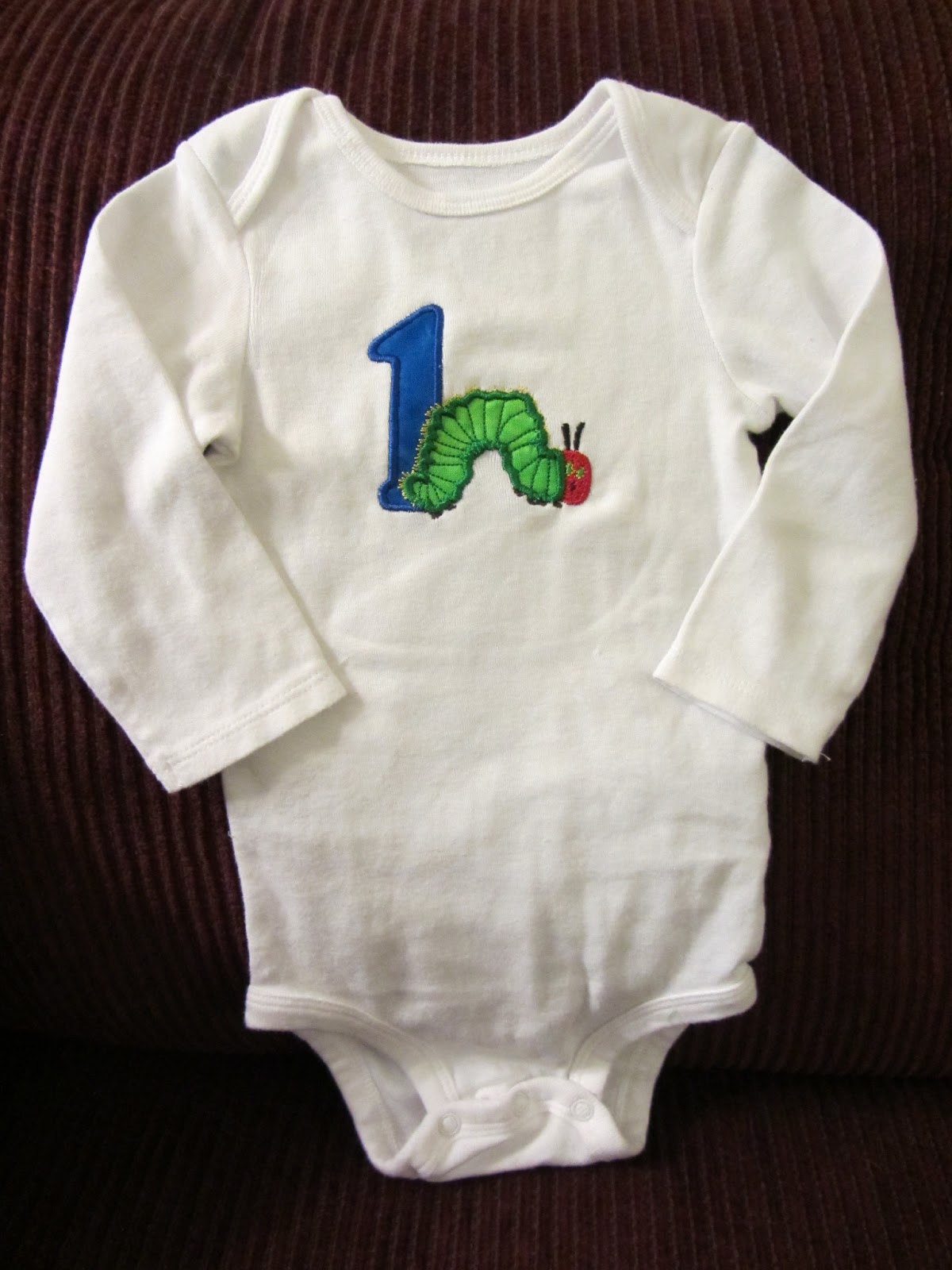 Last Thursday, Cindy had surgery to put in the port for her upcoming chemo treatments. She's had two trips to the ER (one by 911/ambulance) in less than a week with complications. Luckily all is now okay and she wasn't admitted on either trip. But, needless to say, she is terrified and trying her best to stay positive. She's a ten-year survivor and a true warrior! The doctors give her a year at best, but I believe she has the fortitude and strength to make it to their 50th wedding anniversary a couple of years away. My brother has long embraced the practice of calling me to check in, asking if I have a minute, and then saying, "Here, Cindy, talk to Sis." I've been her support group, cheering section, loving sister for a long time and through this tough time even more. This weekend we had a couple of nights when we talked until the wee hours of the morning. Thankfully it was on nights when Jacob wasn't coming in the morning so I could sleep in. But I'd have done it anyway. We talked about the quilt I sent her for Christmas--a stack-an-slash of Christmas fabrics that I quilted with snowflakes. 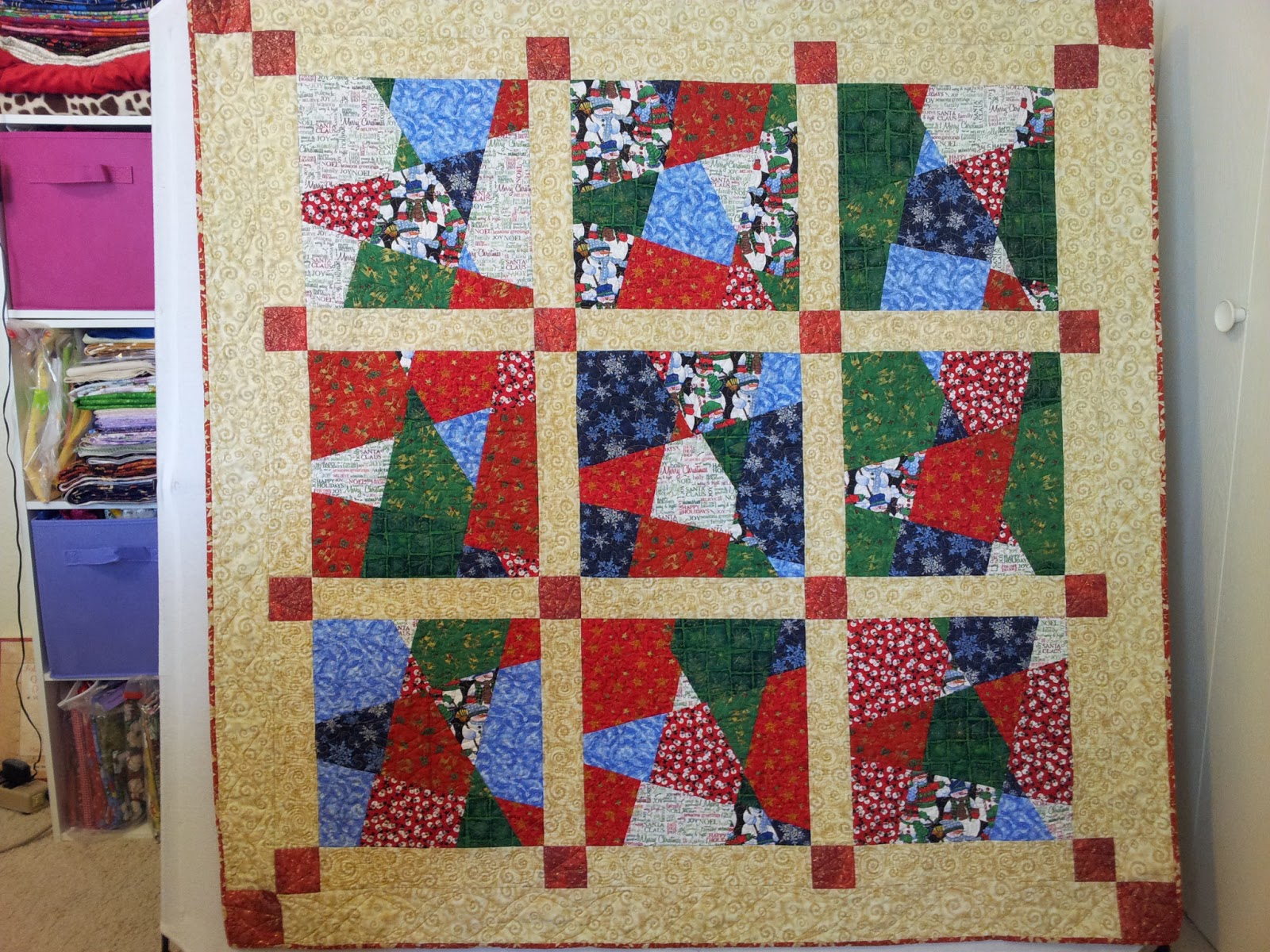 With her Christmas quilt I had made a pillowcase to store it in and use with it out of a fabric with "Believe" written all over it. She LOVES that pillowcase and told me she wants to take it to chemo with her pillow and maybe it will be inspiration for someone else. Cindy said the snowflake quilt is too big to take to chemo, so that sparked in my mind another project that had to be made and fast! So, my mind started jumping, I started playing in EQ7, and a plan came together to make Cindy a quilt with Comforting Words. Her favorite quilt pattern is the Irish Chain, so I worked with that, embroidery designs from Embroidery Library's Wings of Faith and Flowers of Faith collections, and photos I'd taken of Wayne & Cindy and their family several years ago, along with a couple of Cindy's special angels--my parents and two granddaughters who became angels far too early. I used EQ Printables inkjet fabric sheets which turned out marvelous. 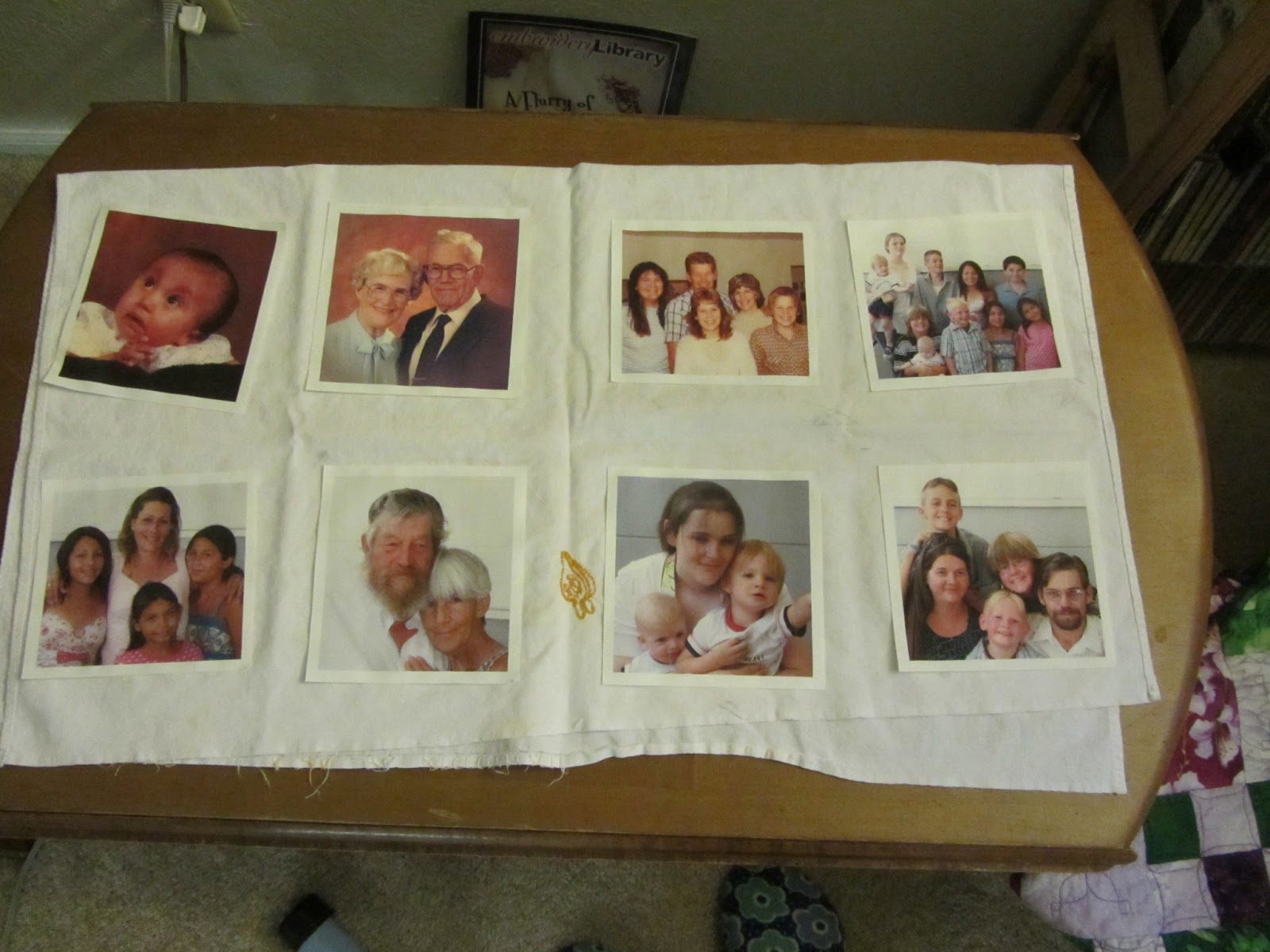 Initially I had planned to use several of the cancer ribbon fabrics, but the more I got to thinking about it and listening to Cindy on those late night calls, I knew it had to be more positive and, if you will, cancer-neutral. So, looking at my stash, I noticed a beautiful periwinkle blue floral in a tub in the closet that I had bought to make myself a dress with, probably 12-15 years ago. I pulled it out and it was exactly the look I wanted! Then to the bag of white-on-whites to balance the floral in the 9-patches. I've had one that I'd been saving for a special occasion that is printed with the words Faith, Hope, Love, and Charity that I used for the embroidered blocks, and a mini-dot for the rest. From there, the embroidery machine went into high action while the printer started churning out photos to be included. 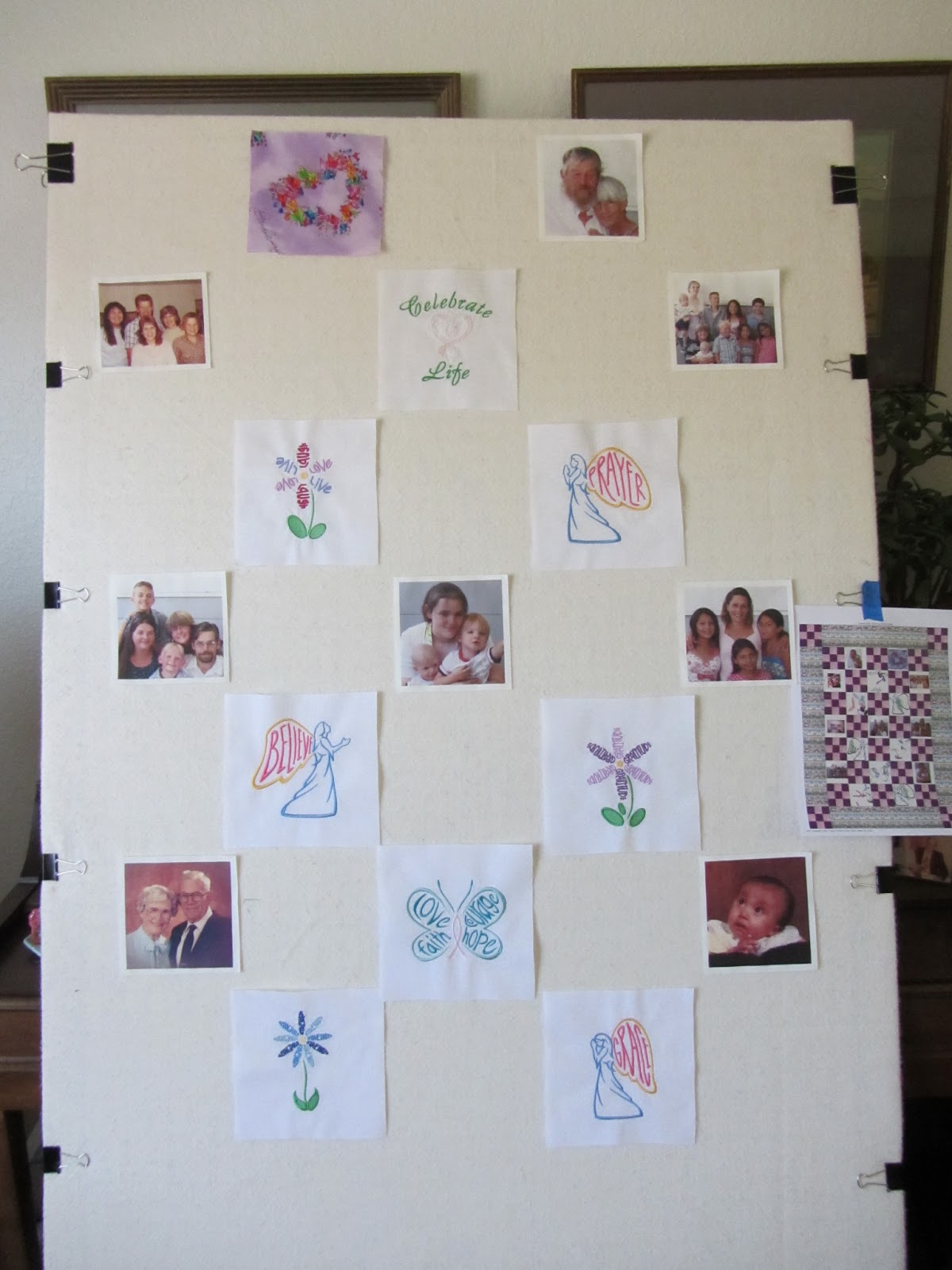 With the EQ7 layout taped to the design board, I started placing the blocks to go between the 9-patches to make the Irish chain pattern. And by Monday night, just 2 days after I'd come up with the idea, I had a top assembled and Tuesday morning I added the borders. It's amazing how much piecing you can get done by using a bluetooth headset to stay hands-free while chatting. 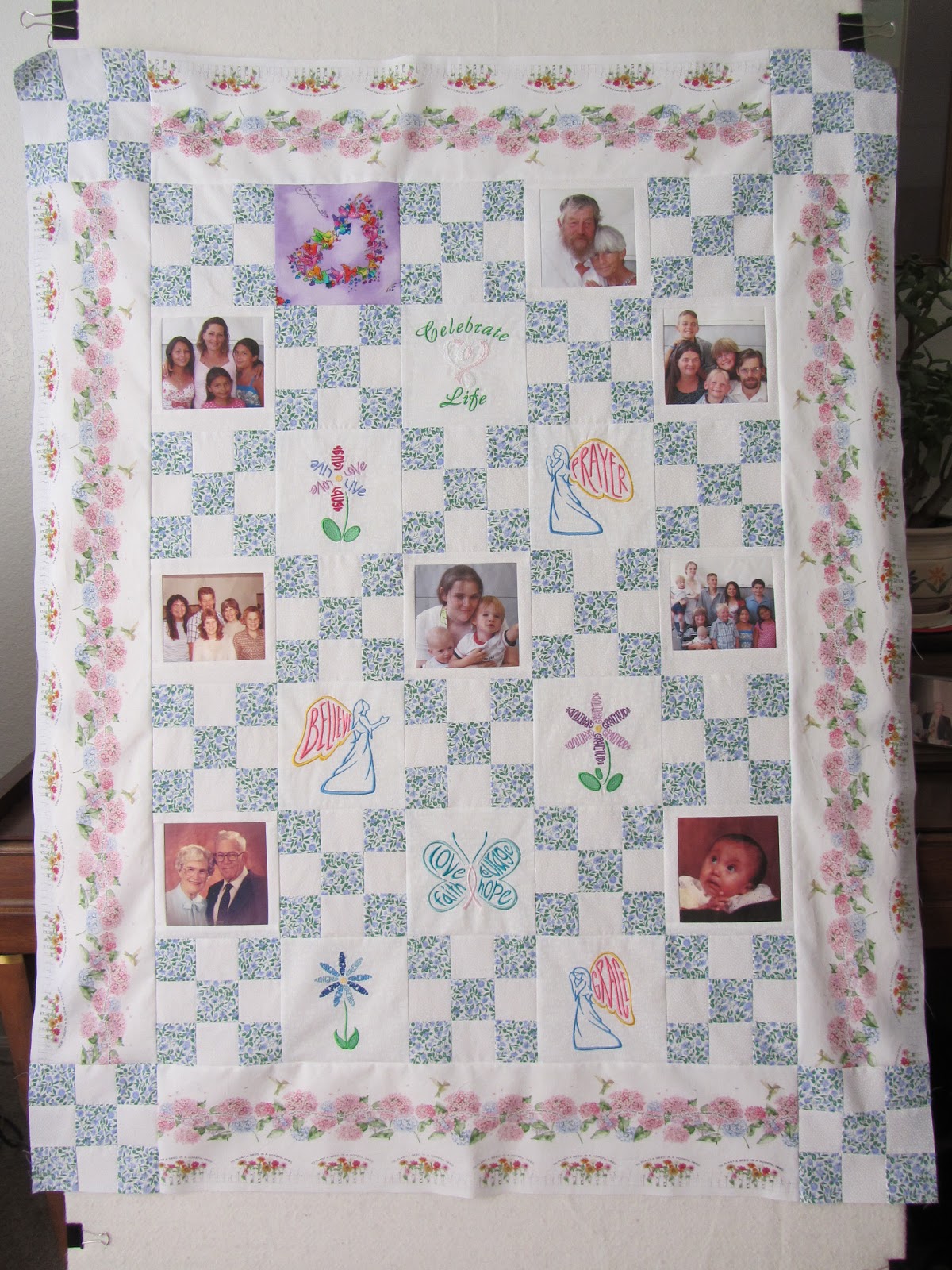 Today I'm spending my time piecing 12" blocks into a larger scale 9-patch for the back and tonight I'll pin and start quilting. I'm hoping to have this quilt completely finished and in the mail by next Monday. It's been a labor of love and I know Cindy will cherish it and share all of those encouraging and comforting words with those she comes in contact with.

Back to the piecing while Jacob naps.
More snippets from the sewing room soon,
Liz
Posted by Elizabeth at 10:45 AM