A couple of months ago, a good friend approached me and asked if I might be willing to take on a project. I agreed to meet at her home to look at said project and, after some conversation and looking at the parts and pieces, I agreed to take it home and see what I could do with it. The project was a Grandmother's Flower Garden that had been started by her daughter-in-law's grandmother, but left unfinished. The plan was to finish it to whatever size I could with the parts and pieces contained in the bag. 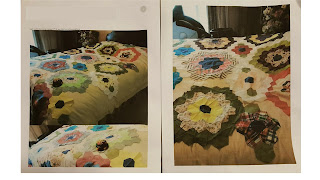 What appeared before me was a rather large puzzle with various pieces that needed to be connected by machine stitching, with a Y-seam at every junction. There was a fairly good sized section with 6 flowers that was already assembled minus several of the setting diamonds, that provided a good starting place. There was also a whole bag full of other parts and pieces that needed to be incorporated in order to make a complete top. Several of the bud blossoms that made up the setting diamonds didn't yet have the surrounding white hexies attached to make them the proper size and shape to fit into the bigger quilt. Most of the remaining flower and setting diamonds were not sewn together or had random strips of white hexies stitched on that needed to be finished. The first step was to complete the "blocks" or sub-units that would need to be put together into the whole later.
There was a fair amount of sewing, ripping, resewing, etc., as I learned from each step. Don't get me wrong, I had done Y-seam projects before, just not at this scale where EVERY SINGLE SEAM was a Y-seam! A few pieces had been stitched together in what looked like the right way, but left little pockets sticking up, rather than Y-seam junctions that laid flat. Those had to be taken apart and re-sewed. If I learned anything from this project, it's how to think differently about how pieces go together, not unlike sewing opposite curves together in a Drunkard's Path block.

Over a period of almost three weeks, I came and went from this project. Every day I would wander into the sewing room and look at the design wall where all of the parts and pieces were pinned up in what would become a final layout, and contemplate what step to take next. Thankfully, last night I finished the process and am now ready to hand it off to be quilted and bound for my friend. 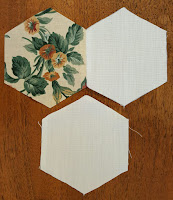 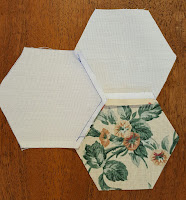 Understanding Y-seams is an important concept if you wish to machine piece a hexie quilt like this Grandmother's Flower Garden. The most important thing to remember is to always start and stop your seams 1/4" in from the edge of the fabric, being sure to add 2-3 back stitches to anchor the seams. By starting 1/4" in, you leave a flex point where that seam can then open and bend as you pivot to make the next seam around the corner. This example I stitched with contrasting thread to show the importance of leaving that 1/4" unsewn in order to make those corners. 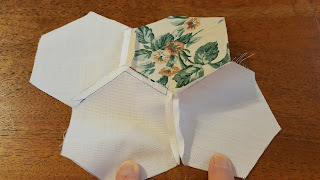 For the larger blocks within the quilt, I first had to lay the piece to be inserted/attached next to the block, then flip it over, right sides together, in the same position (photos below with brown & white hexies). Notice how the points go into the Y-seam V's when right-side up, but points meet V's when flipped over to be right sides together. This is where it gets tricky. The first seam in the example below would actually be sewing the two white hexies together from the outside edge into the white/brown V at the top, stopping at the seam line with needle down, lifting the presser foot, and pivoting the pieces in such a way as to then sew the white hexie in a continuous seam line down that zig-zag line. With each pivot, you will need to readjust the previous seam, often folding the hexie before in half to allow the new seams to line up for stitching. By leaving 1/4" open at either end of the seams that join individual hexies, they can flex/ease open as you pivot and stitch. It's slow going, stitching 2", stop to pivot and line up the new seam, stitch 2", stop to pivot and line up the new seam, etc. etc. 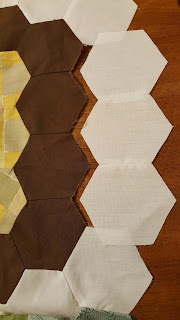 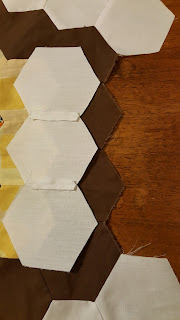 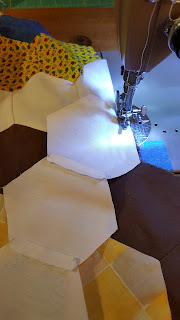 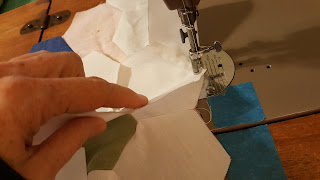 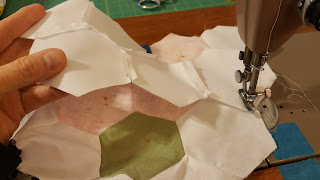 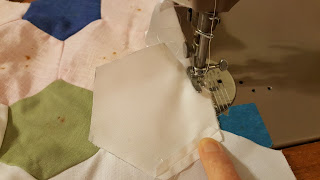 The original maker had not left 1/4" open at either end of any seam. All seams had been stitched all the way to the edges of the hexies and joins were forced to flex into the Y-seam when pressed, often unsuccessfully. I spent a significant amount of time clipping seams open 1/4" before I could pivot and stitch as I added new sections to the flowers and setting diamonds. There was one flower in the original partially made section that had some real troubling seams. Not only were they sewn from edge to edge, there appears to have been a problem with tension on the machine as the hexies seemed to be gathered rather than stitched together. An entire evening was dedicated to this one block where I removed the center of the flower between the red ring and light blue outside ring, pressed each piece well with Best Press to help it regain and hold its original shape, and then reinserted the flower into the surrounding ring. As you can see in these before & after pictures, the difference is dramatic! It was also a lesson in patience as I worked the center back into an existing ring praying it would all fit properly when stitched. 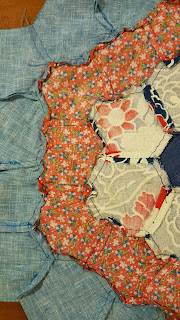 After reinserting the flower center into the blue ring, the flower laid completely flat and fit nicely into the rest of the quilt top. Whew! What a relief! 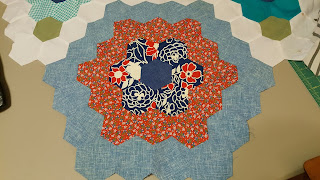 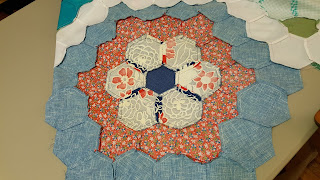 Finally all of the parts and pieces were ready to assemble into a completed top. I worked on one section at a time, adding the flowers on the right side first, as they had a U-shaped seam to fit around a section that had an extra flower and diamond already sewn into it. 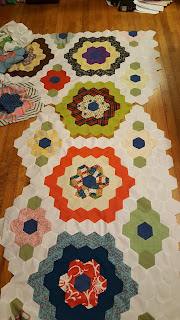 I didn't keep track as well as I should have on where to sop and ended up stitching too far, creating a 3D pocket along the edge of the flower with the gray and white stripes. Break time. I stopped to take out that row of stitching back to the proper junction, and then proceeded to add other sections. 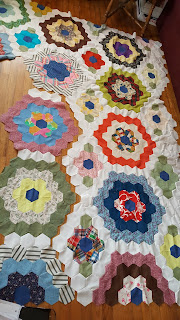 The next row of flowers, each connected by three white hexies, were laid out and then sewn along that long zig-zag seam from the bottom up and then across the three pieces that connected them to the upper section flower. I was finally getting close to being done! 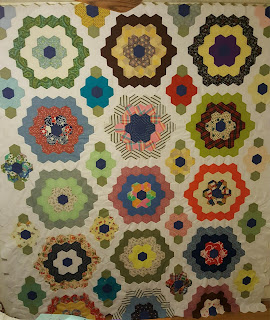 The final row of flowers and diamonds was added and by late last night, the Grandmother's Flower Garden top was completed! Final measurements show it should finish about 83" x 94", a great size to use on a bed. I did use extra white hexies to make small half-diamonds to fill in the spaces on both sides to make it square. 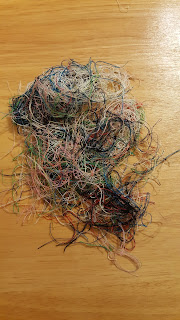 I also did an enormous amount of trimming of threads along the way. As I pressed sections, resewed blocks, and generally went over the entire quilt top as I worked on it, I found threads of many colors. Some had 1/2" tails left and may had tails up to 6" long hanging across the back! Knowing how much it bothers me when threads peak through white fabric when sandwiched and quilted, I did my best to trim as I went and ended up with this pile of multi-colored threads that were all clipped from the back of this quilt top, all left by the original maker. There were significant amounts of black, green, blue, pink, red, yellow, white, and more. Most seams were not sewn with matching threads on top and bobbin. 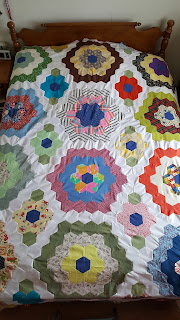 I'm happy to say that this quilt is now ready to go the longarmer who will quilt it for my friend, after which another friend will be binding it for her. Due to some health issues and multiple surgeries, my friend's quilting time is very limited. It's taking a team to get this special project done so she can give a finished quilt back to her daughter-in-law who will cherish this creation started by her grandmother and completed with loving care by her mother-in-law's friends.

Posted by Elizabeth at 2:15 PM No comments: Links to this post