Wanderlust: Experiment with a One Block Wonder layout

I have a new quilting obsession... Making One Block Wonders with panels or border print-type panels and incorporating an uncut panel into the overall layout! I had already made three different One Block Wonder quilts and have a new mini-OBW in the works. What made this quilt top different started when I recently joined the One Block Wonder Forum group on Facebook. I noticed members posting that they were using panels instead of just multiple repeats of print yardage, which sounded very intriguing! I mentioned this to my local quilt shop owner and her face lit up instantly as she walked across the shop and picked up a bolt of Wanderlust by Hoffman Fabrics, a gorgeous abstract print built around an image of the Eiffel Tower. She asked if I would make a sample to show at the shop during the upcoming shop hop. Of course I agreed! I took home six repeats of the fabric with plans to start cutting the next weekend at our guild's monthly Sew & Sew day.
I followed the usual technique of aligning six repeats of the fabric, cutting strips, sub-cutting the strips into 60 degree triangles, and then assembling the triangles into two halves of three triangles each to create two half-hexies that would later be sewn together into rows for an overall kaleidoscopic layout. Rather than aligning and cutting strips the full width of the fabric, I instead cut them across the 18" repeat width of the repeat, which was much easier to line up and cut. I chose to cut 3-1/2" strips, slightly narrower than the recommended strip width of 3-3/4" for large scale prints in the original One Block Wonder books by Maxine Rosenthal. The floral design at the bottom of the fabric seemed a smaller scale than many of the fabrics used for OBWs, so a 3-1/2" strip would keep the colors and designs better framed within the triangles.

I use the Clearview Triangle 12" 60 degree ruler to cut my triangles. I prefer this ruler as it has the point at the top which makes the triangles easier to line up when sewing them together. I place a piece of plastic tape across the ruler at the 3-1/2" cutting line so I don't have to think about where to line up my ruler each time I move it.
Once all of the triangles were cut, the gals and I attending the Saturday Sew & Sew wanted to see what this quilt might look like, so we laid out a number of triangles just to see what we had to look forward to as the pieces were sewn together. 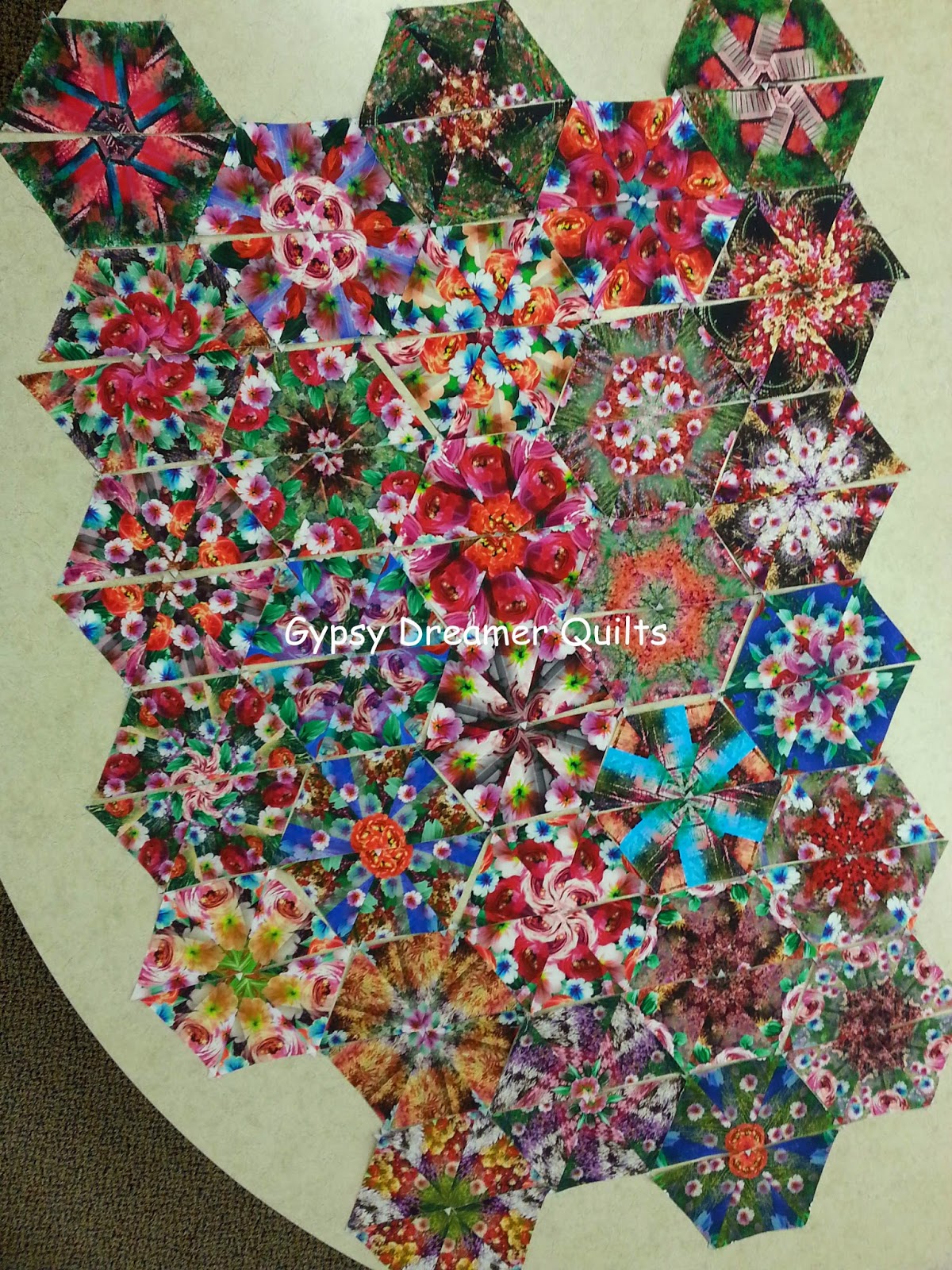 Excited by what we had just seen, I started sewing pairs together right away. I took each set of 6 triangles and sewed two pairs together--string piecing continuously, setting the remaining 2 triangles aside to later add to each pair to create the half hexies. Most of the triangle sets were sewed together the same direction they were cut; although, there were a few that I rotated to create a different look. Testing out layout options before sewing took place at the machine before stitching the pairs together.
After all of the pairs were sewn together, all seams were pressed open before I went back through the stack in the same order, adding the third triangle to each pair. Once the half-hexies were assembled it was time to start playing! The two halves of each hexie were pinned in order to keep them together as I began playing with the layout. Working from the dense color hexies from the bottom of the panel up to the light sky color hexies from the top, I started laying them out on a table to see just what I was coming up with. 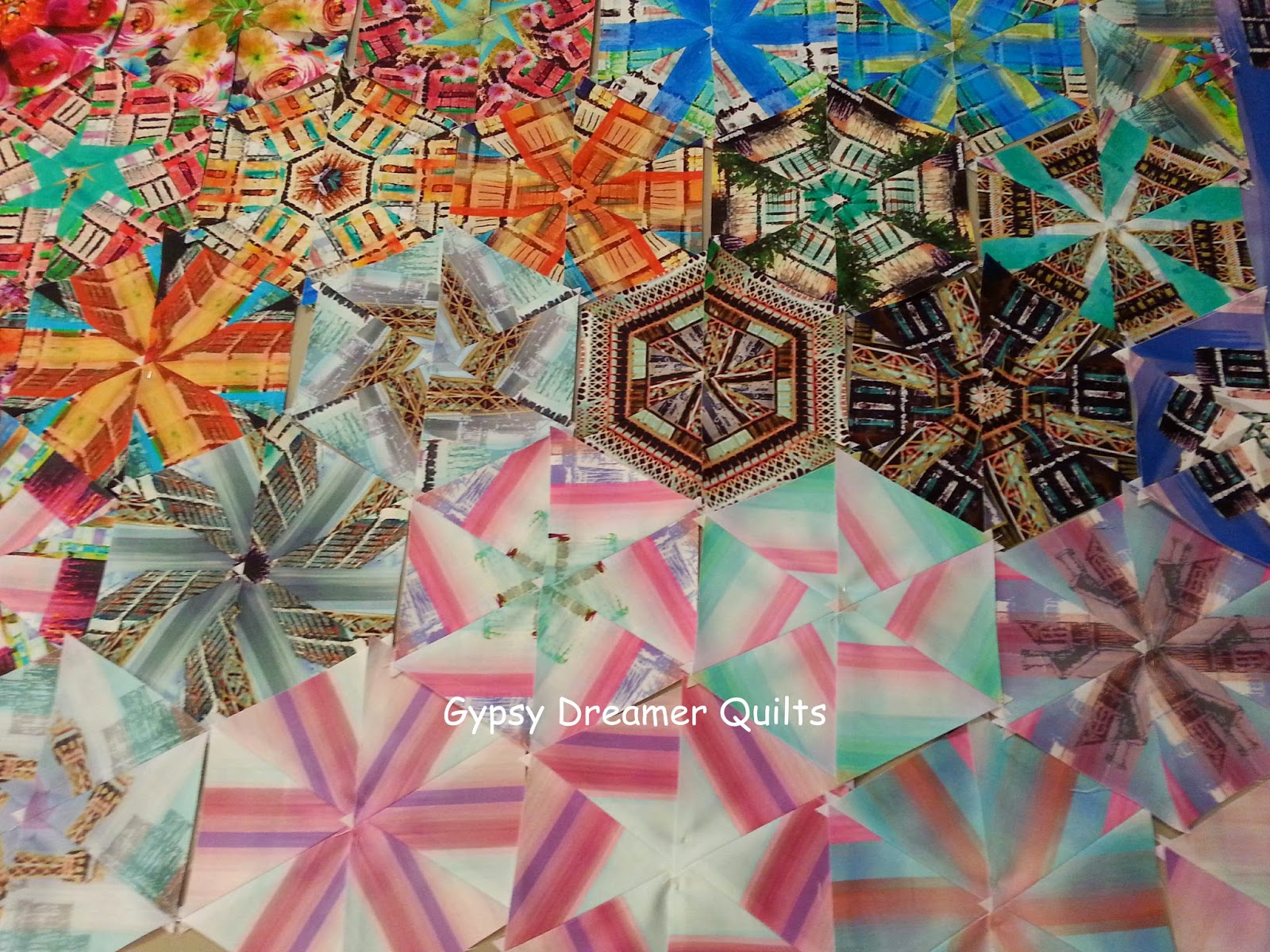 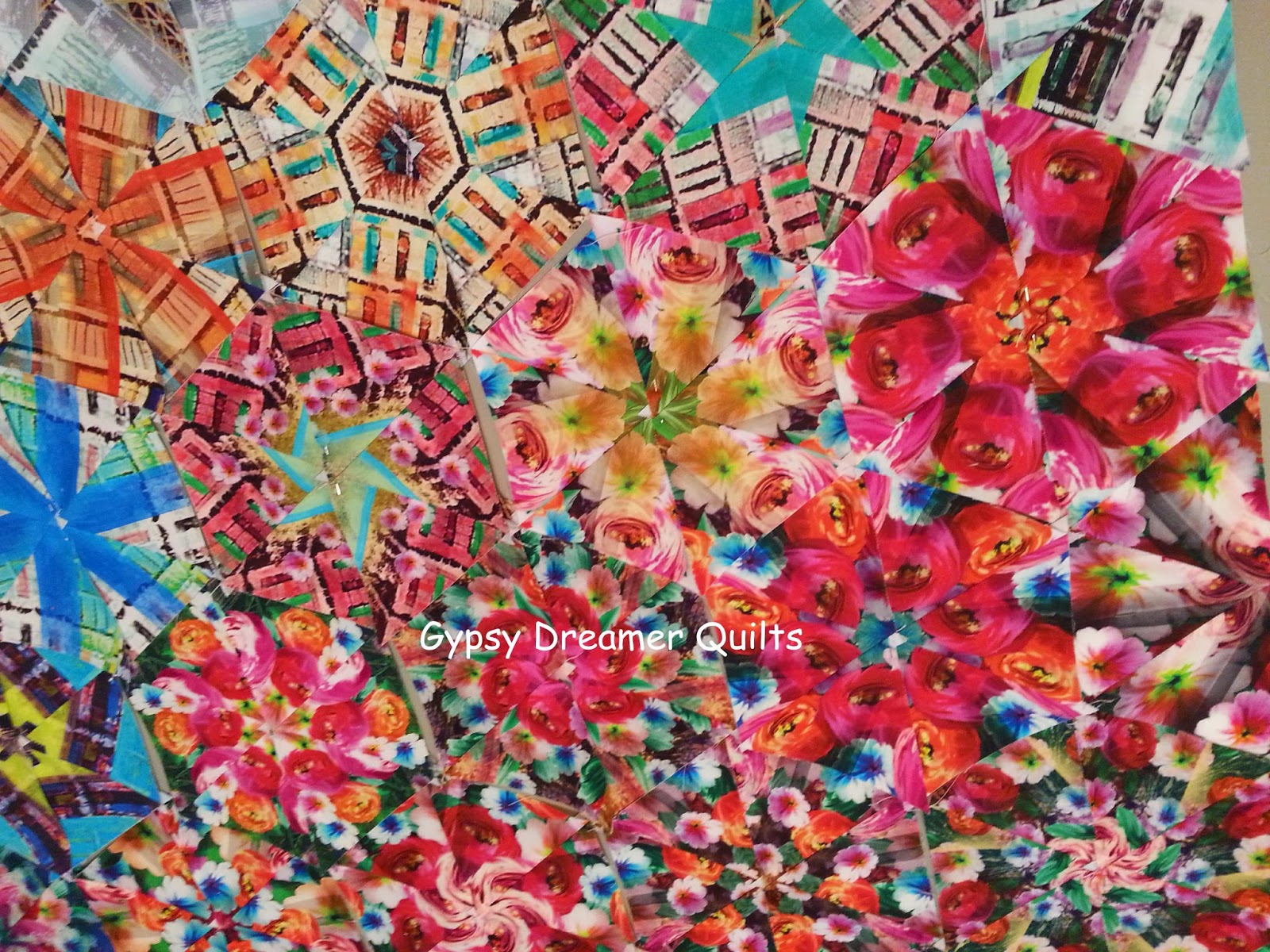 As I started laying out the hexies into a color flow, I took a few pictures to post in the OBW Forum on FB. There were many comments and the ones that drew my attention were from members who suggested incorporating the uncut panel into the layout. Normally I would add a piece of the original fabric as a border, but with the panel that didn't make sense. I took the suggestions and started to play even more, returning to the shop to get a 7th repeat of the fabric to use uncut in some way.
As I added the panel, I felt it needed to be offset by a border, initially thinking surrounding it with a blue sky fabric I had in my stash that blended well with the top of the panel. Getting feedback as the layout progressed, I went from having the blue around the panel and as an overall border, to removing the blue except at the top, and substituting a 1/4" red frame around the panel, allowing it to blend in with the layout while still being set apart.
Adding the narrow red border (the red was in my stash and blended well with the overall layout) was looking better and better! I cut 1" strips of the red, pressed them in half lengthwise, and sewed them to the four sides of the panel, thus creating a 1/4" finished flange frame for the panel. Then it was time to start sewing the rows together. Being sure to work one row at a time and keeping the order correct takes time and patience. Opposing halves of hexies have to remain lined up correctly as subsequent rows are sewn together, so I allowed two evenings to sew rows together.
All seams were pressed open in order to distribute the layers as six seams come together at the centers of each hexie as long rows are sewn together.
Once the top was completely sewn together, I layered and pinned it with Dream Poly batting and backing. Then I went to my HandiQuilter Sweet Sixteen to do the quilting. For all of the hexies of the OBW portion of the quilt I did a simple orange peel quilting design with a 50# Aurifil Antique Rose (#2430), keeping the curves about 1/4" from the seams. On other quilts I typically stitch-in-the-ditch, but on a OBW that has seams pressed open, this is not practical, so the narrow orange peel provided stabilization to the seams without stitching on the stitches in the seams. For the uncut panel I chose to quilt a boxy meander in YLI Natural (#239) 100# silk, which blended in beautifully.


Happily, I found that my top squared up easily once the quilting was complete. With as many pieces as there are in a OBW and the possibility of the many bias edges of triangles distorting, having my OBW quilt come out square gave me an amazing sense of accomplishment!
With the shop hop starting on Wednesday morning at 9:00 a.m., I knew I was under pressure to meet that deadline. The quilt was done, the binding was sewn on, and I was hand stitching the binding down on Monday evening. At 2:10 a.m. Tuesday morning the final stitch went into the binding and it was complete! 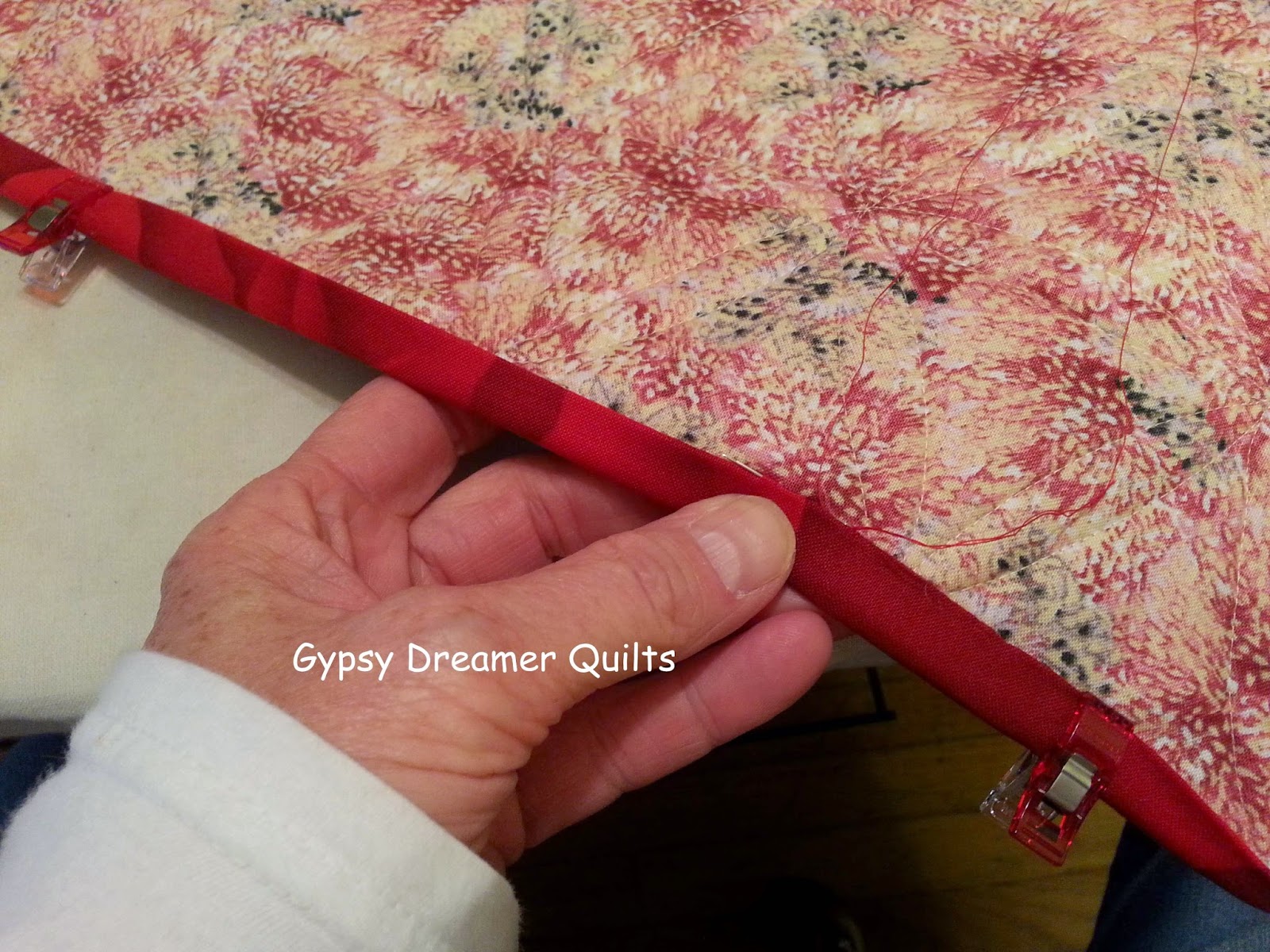 I delivered "Wanderlust" to the shop on Tuesday afternoon where the shop owner greeted me with raves of how great the quilt had turned out! Finishing at 44" x 60", I'm considering this my first art quilt and plan to make many more. Wanderlust will be entered in the Lyon and Douglas County fairs, as well as the Kansas State Fair this summer. I'm also exploring the possibility of entering this quilt in a quilt show competition. 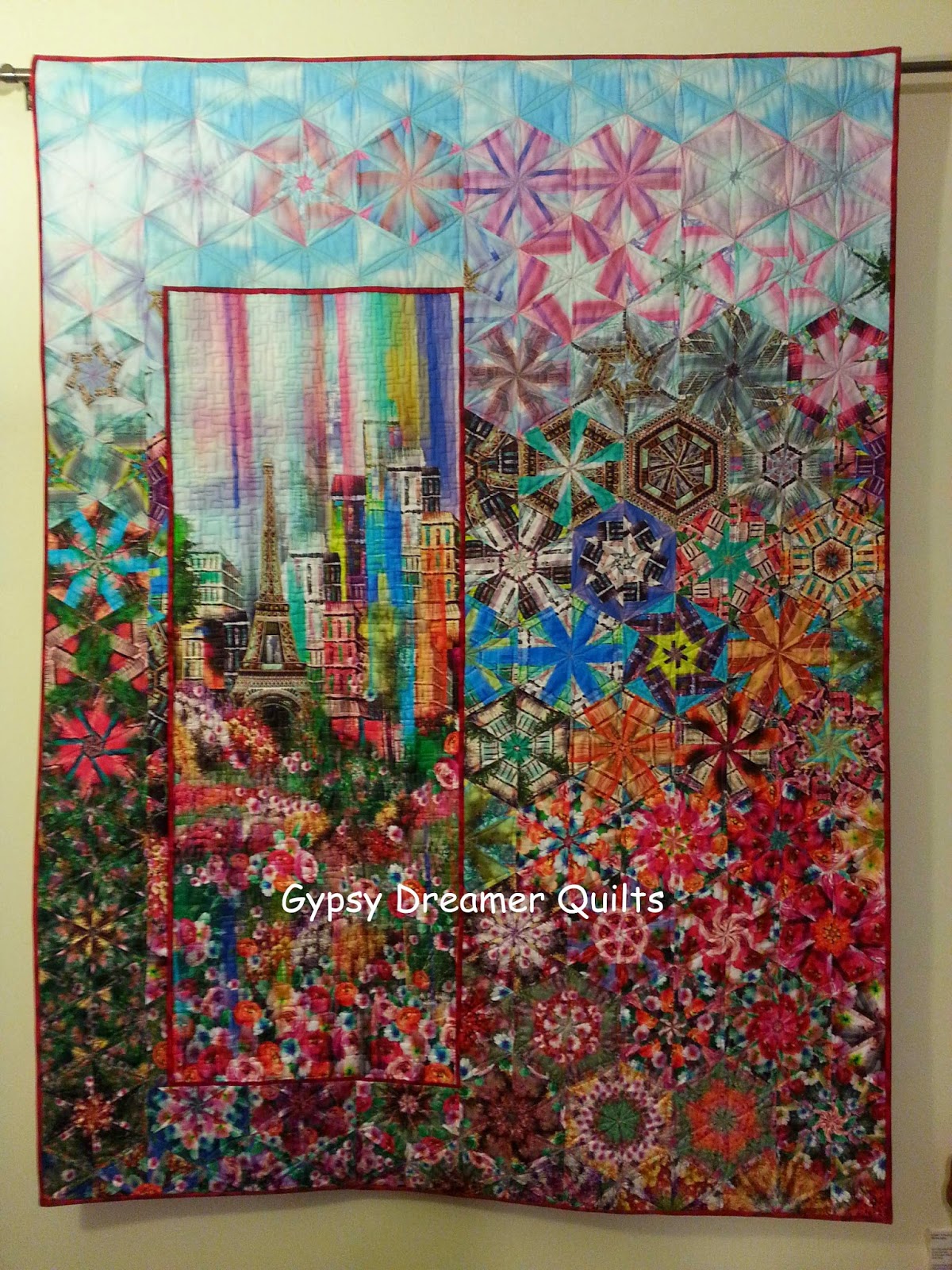 The first cuts were made on Saturday, March 28 and the final stitches went into the binding on Tuesday, April 7, just 9 days later. It may not seem like a long time to most, but I know it would have been completed much faster had I not been at the Sweet Sixteen for 4-6 hours per day working simultaneously on quilting our guild's opportunity quilt. I hope you've enjoyed this journey through the making of Wanderlust, a One Block Wonder art quilt.