Lost spring... Picking up where I left off.

I feel like I dropped off the face of the earth and just finally, two months later, resurfaced! Wow! It all started with a mid-March spring break visit from my granddaughter Jordyn. Our initial plan was to sew together and work on her collection of blocks. Unfortunately, she proceeded to get quite ill with a nasty stomach bug, which got passed along to little Jacob who had never had a stomach bug before. And then all three of us ended up with horrible colds. Jacob and I passed ours back and forth for weeks and I suffered through two rounds of antibiotics to knock the bronchitis and sinus infections that just wouldn't let go. Argh!!! I HATE being sick! 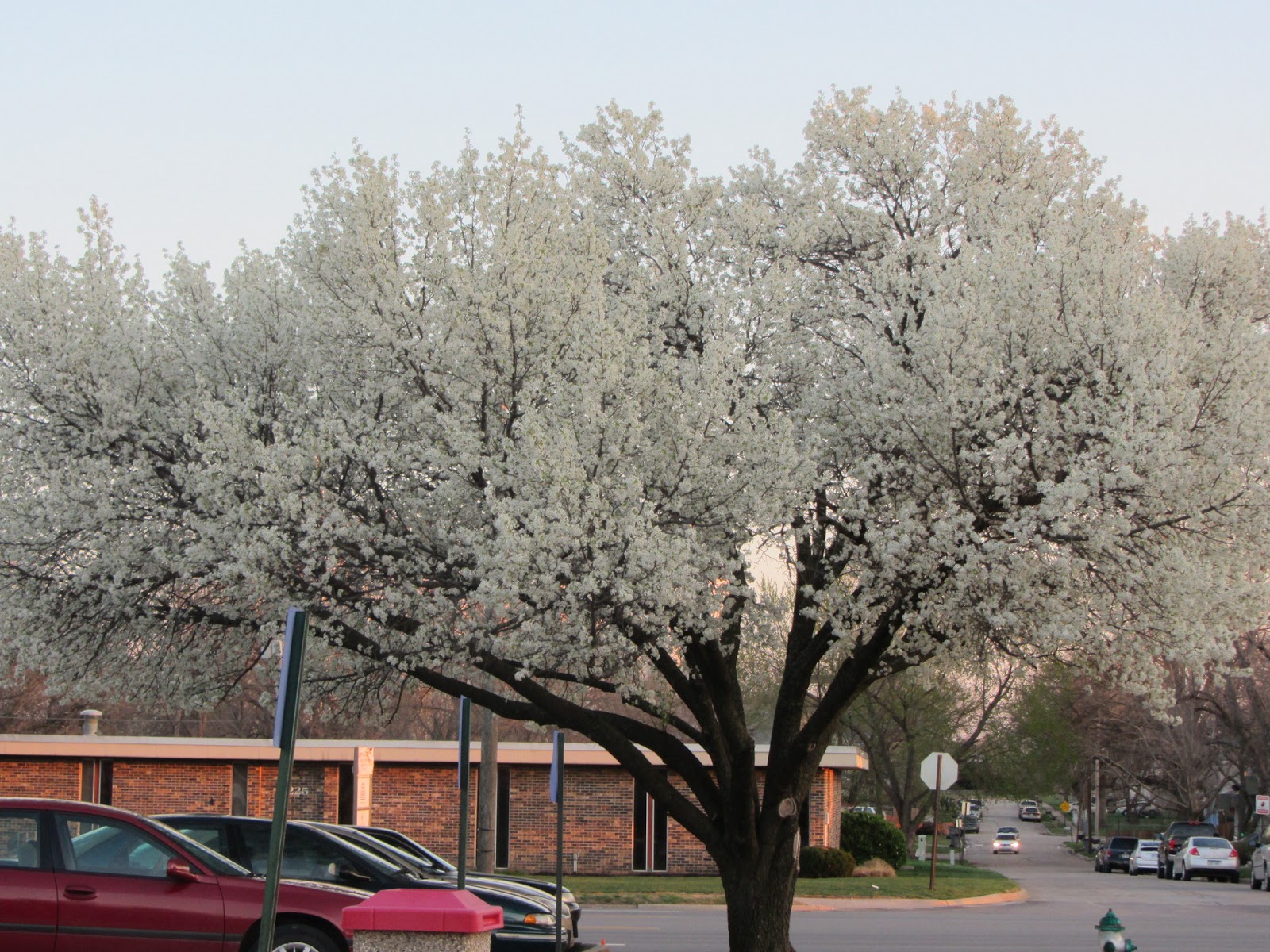 Somewhere in the middle of all that we had another snow or two or three... And finally spring came! It didn't last long as there was yet another snow AFTER the blossoms finally came forth, but it was beautiful while it lasted.

By late March, my daughter Ali (Jacob's momma) learned she was losing her job and before it ended, she landed a great one about 90 miles away! It's closer to where her husband is transferring to finish college and where they wanted to go anyway, but she was camping out with friends during the week while Daddy and I covered Jacob-care. Being gone from him all week was just too much! My lease was almost up, so I started looking up where they're heading and found a 3-bedroom townhouse that will suit me fine. So, after spending much of March sick, on April 3 I signed the lease on my new place and started packing. Ugh!!! I HATE moving! I just did this a year ago! At least this move is not cross-country and I have 2 months to get it done (lease expires May 31 at the old place).

So, you may ask, where does quilting fit into all of this?!? Well, it didn't. From spring break until my guild's quilting retreat in early May, I never touched a sewing machine other than to pack up and move from one house to the other. I felt lost, but with everything boxed or bagged up and spread between two houses, there wasn't much to do except continue on. 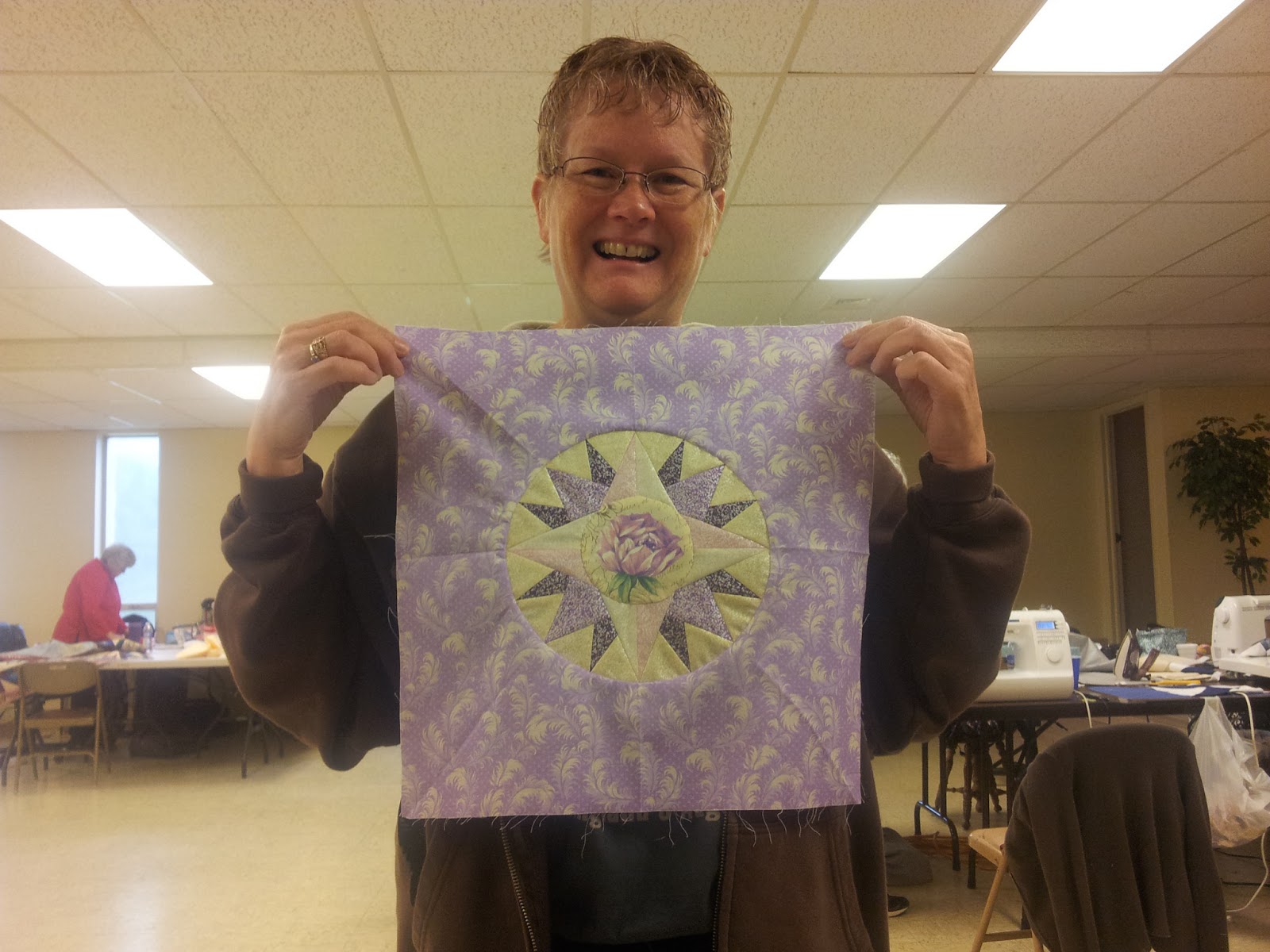 Getting to attend the quilting retreat was such a relief and so fun! I truly needed a break from packing, unpacking, Jacob care (which hinders packing and unpacking), and being away from my quilting & sewing. I hauled my sewing machine and my bags (and bags) of projects and supplies back to Emporia, hoping I hadn't forgotten anything (my home wasn't across town anymore!), and set up with my buddies for some serious sewing. Elaine Boese, a quilting teacher in Kansas and daughter of one of our guild members, came for the weekend and taught a workshop on Mariner's Compass blocks. It was delightful and the way each of the blocks came out was so different you wouldn't have believed we all worked from the same basic instructions. I used several fabrics from the 2012 Hoffman challenge collection, which I'd purchased but never used. I even fussy cut a rose for the center of my block! I saved Elaine's detailed handout with instructions on how to draft, cut and assemble the blocks, and have enough fabric to make several more to make a Mariner's Compass sampler quilt--someday when I'm unpacked enough to find everything. Ha!

So, I'm hopefully back to stitching, at least a little bit. I have several pressing projects to get to--a memory quilt for my cousin's granddaughter whose 2-year-old daughter died, and finishing a quilt that my sister-in-law Cindy's grandmother pieced back in the 1950s or early 1960s. Both have to be done soon, so the sewing room is getting organized quickly! However, even with my organizing, I still have a final paper to write for my Master's class that's due this coming Monday. There always seems to be something keeping me from sewing lately, but I'm determined to get things back the way they should be with stitching time as part of my everyday routine.

One high point of the new home is that I have room for my HQ Sweet 16 in the kitchen and will also be adding my auntie's old Singer in its cabinet there as well. That will allow me to stitch and quilt on the main floor where Jacob is free to roam and play, which at 11 months already he's doing plenty of! The big sewing cabinet and the embroidery machine are upstairs in the sewing room/office and all of the supplies. Hopefully I'll figure out how to make two sewing spaces work. Otherwise (and probably a sure thing) I'll be running the stairs regularly which will provide good exercise to balance out my sitting & stitching time.