Catching up with projects

It's been a busy few weeks between school assignments, Jacob care, and two retreats. I was gone at the end of the month, so missed out on the NewFO Challenge linky party for February, but plan to be back in March. Here's a quick update on the projects I've been working on. 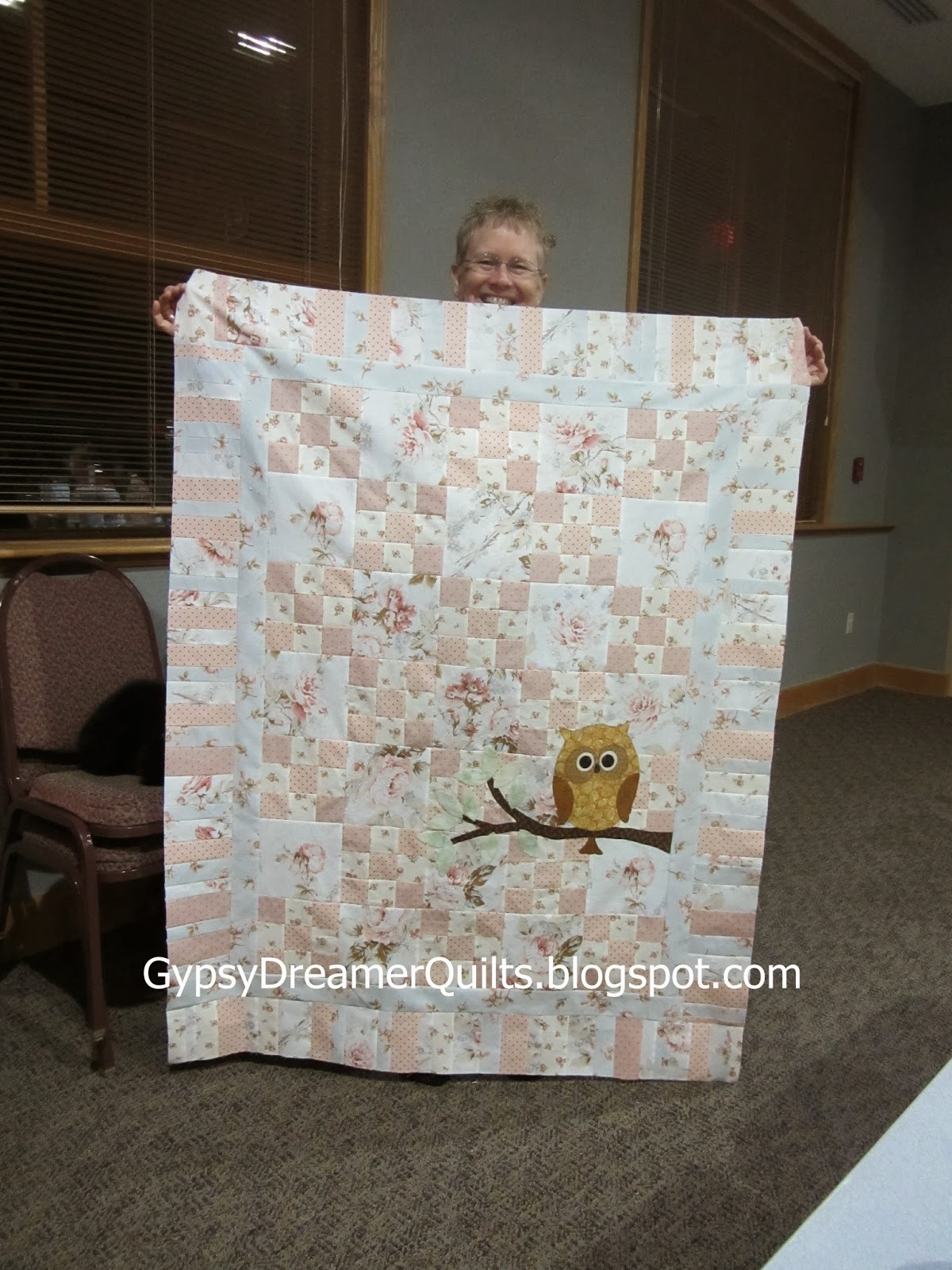 Over Presidents' Day weekend, I spent four days with the gals from the Eudora Quilting Bees Guild enjoying four days of quilting at the Tall Oaks Retreat Center in Linwood, KS. The accommodations were delightful and the food fabulous, and the array of projects being worked on dazzling! I took way too many projects with me, but rather than being overwhelmed with too much to pick from, I focused on several that had been waiting to be finished. First I finally caught up on the flannel self-binding receiving blankets I had started months ago. That's a relief! The major UFO I took to work on was the "Remember 'Whooo' Loves You" quilt for my great-niece Chelsea and her new little one Opal Faye. I had assembled the top before Thanksgiving with plans to get it to Chelsea before Opal was born in early December. It turned out I hated the way it looked--the Irish chain disappeared with the fabric choices in the layout, so I had taken it all apart and it was waiting. Now I'm very happy with it and, although Opal is already 12 weeks old, it's never too late to send a quilt that she can enjoy for many years to come. 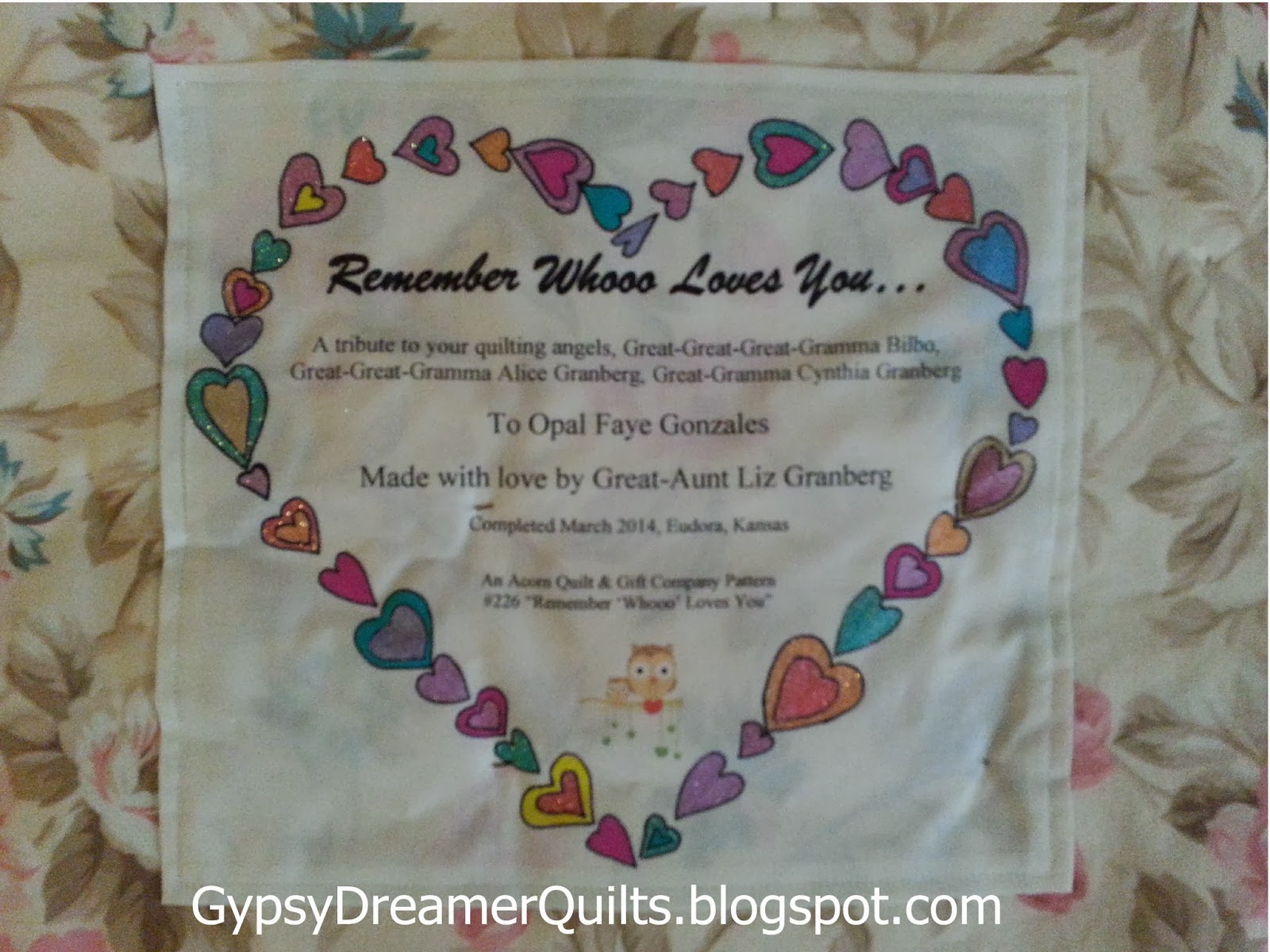 This week I got it pinned so I can do the quilting on it. I also played with the label and chose a design I could color in with my fabric pens. It is already sewn on so it will be quilted with the rest of the quilt to make it more permanent. 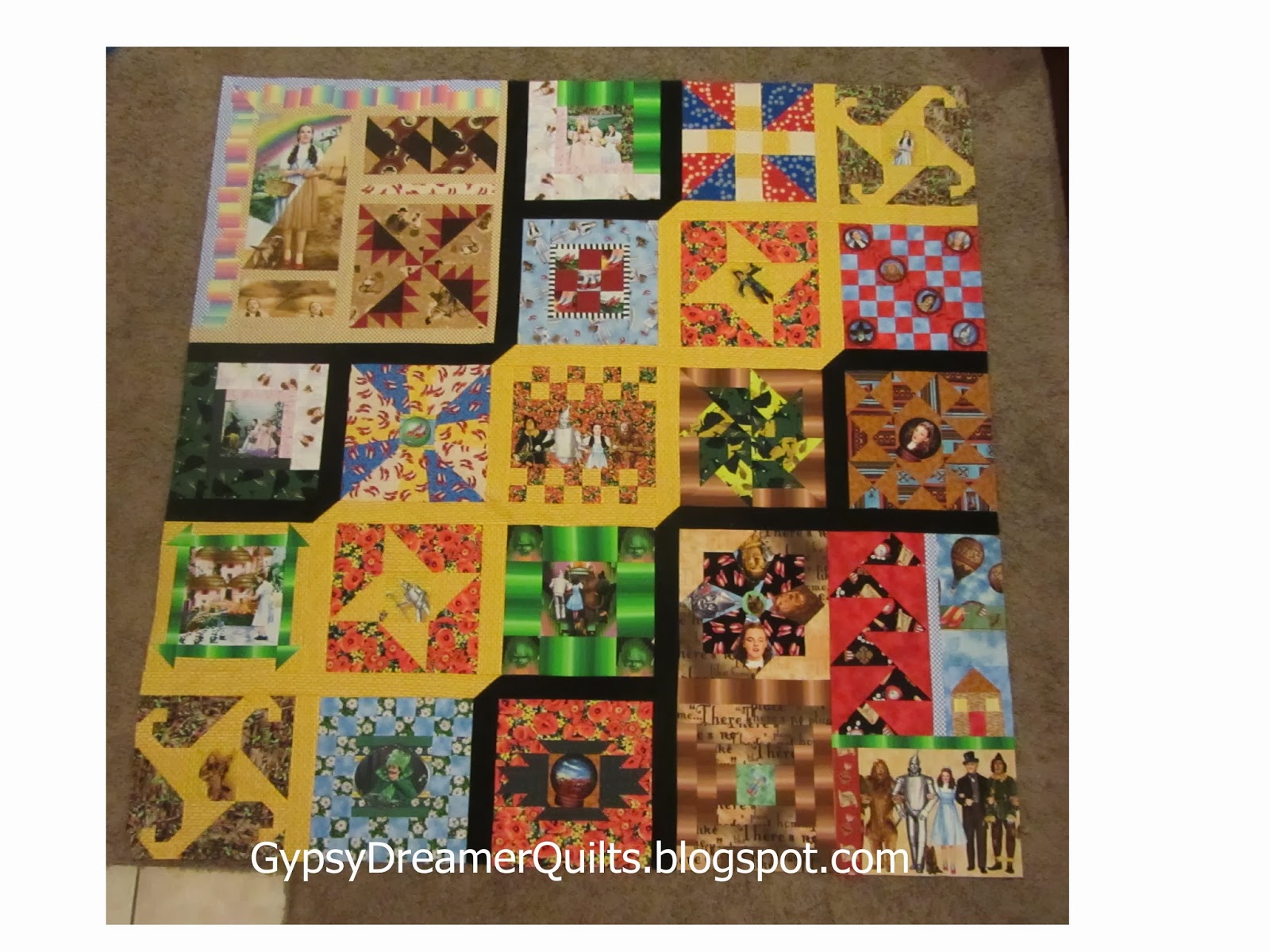 Between retreats I went back to the Wizard of Oz BOM from 2010 that I had started, but was far from finishing. All of the blocks are now done, sashed, and assembled into the main body of the quilt. Next will be to start on the pieced border. Maybe that will be a task for the next retreat over Spring Break.

Finally, another BOM I started in 2013 is the Vintage Rouge. It's a gorgeous pattern that includes piecing, English paper piecing, embroidery, and applique. I was going along great until the English paper piecing blocks popped up and I came to a screeching halt! There are five of these blocks that feature a Dresden plate--four smaller ones and one large one for the quilt center. I have to admit I was intimidated by the prospect of doing the Dresden plates by hand. This week I pulled those blocks out and started in making the Dresden plates entirely by hand and amazingly the first one came out great! I'm so relieved and have started on the second one with three to go. 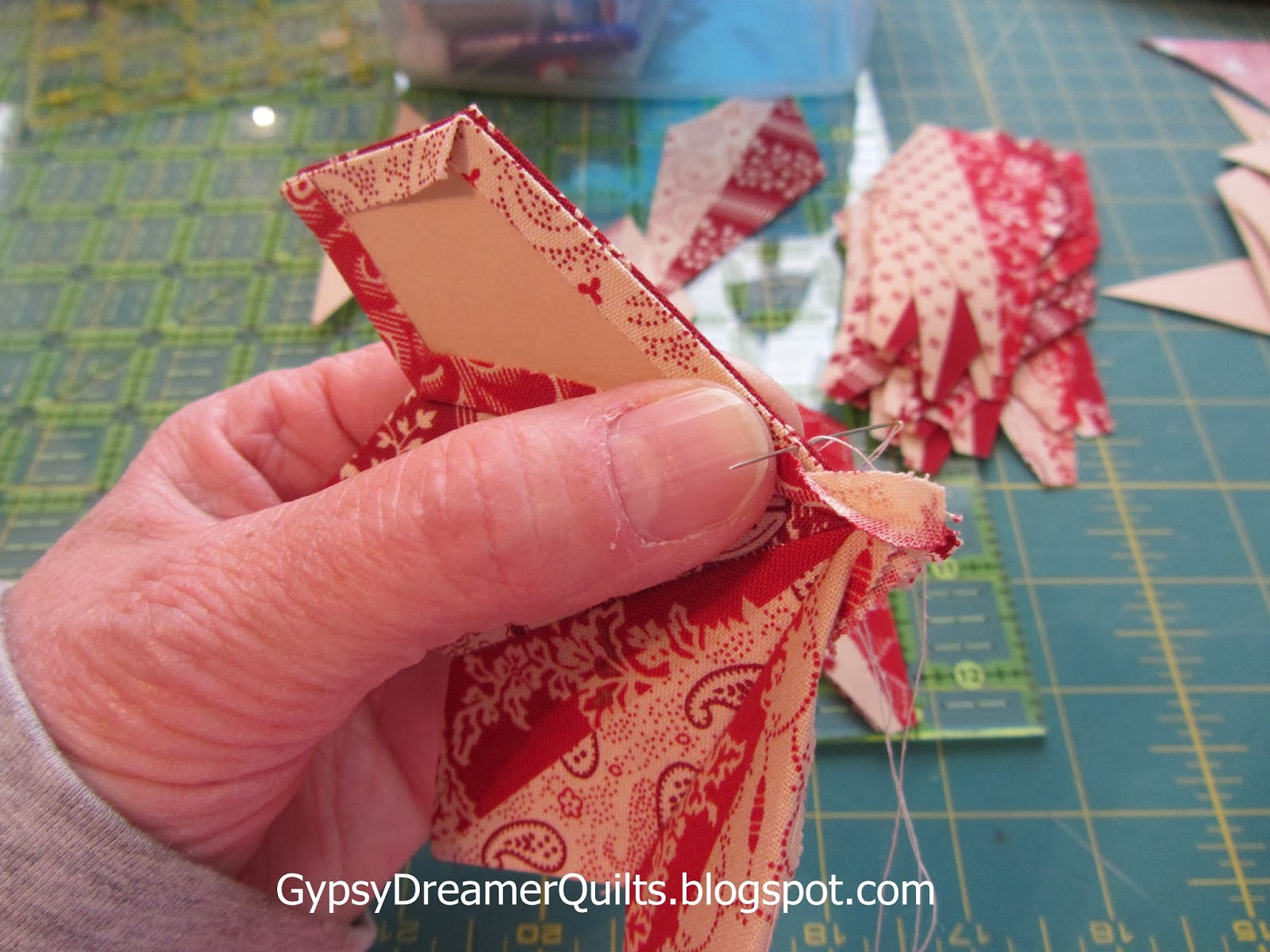 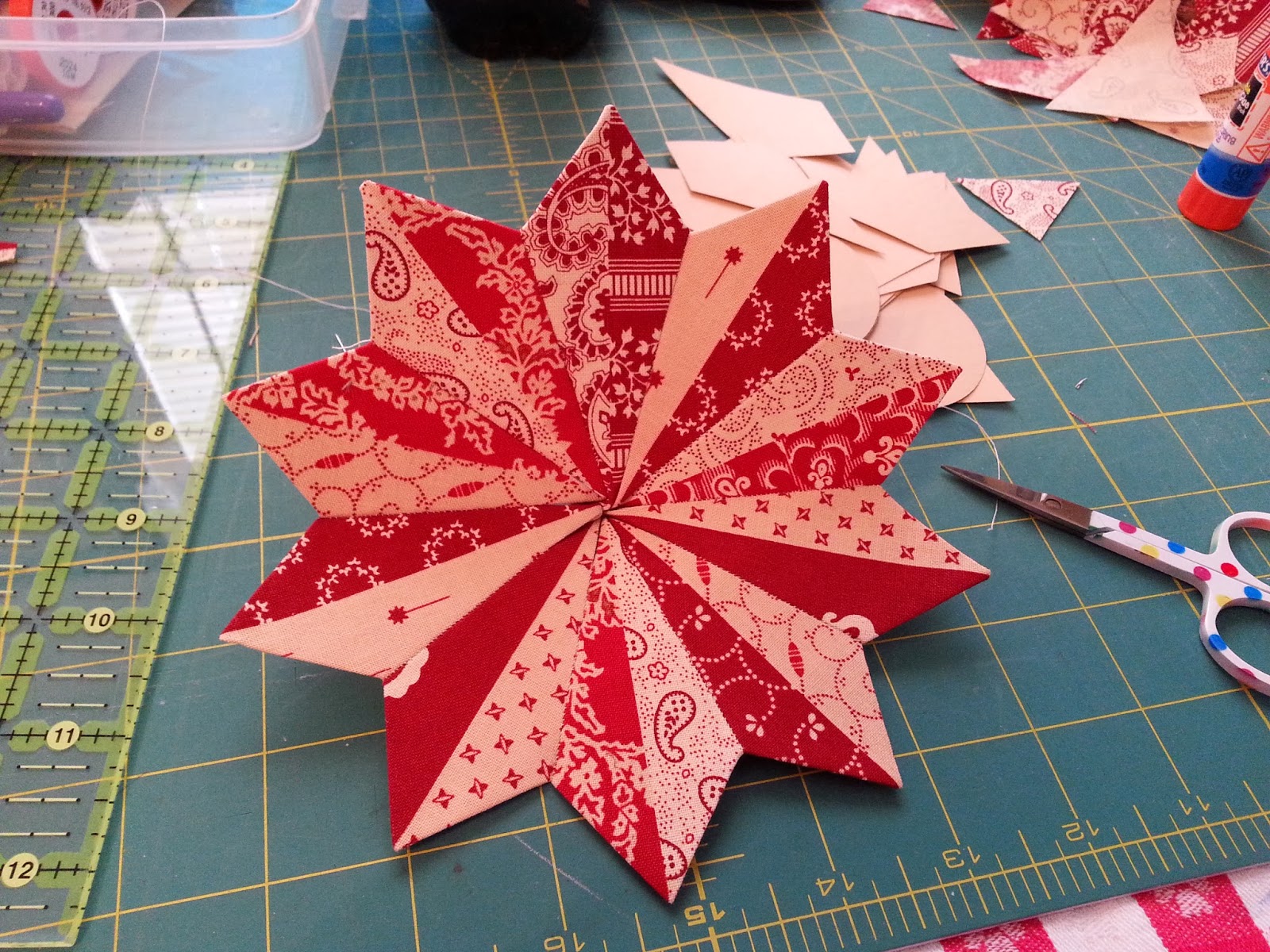 There are several other blocks yet to be completed before I can start sewing them together, but at least I'm not stalled anymore.While attending the quilt retreat in Oklahoma last week I went with several of the gals to another nearby camp where a huge quilt retreat of about 90 women was being held. Numerous quilts were hung up on the walls around the main room including a Vintage Rouge that one of the campers had made and quilted. It was gorgeous and reminded me why I loved it so much! I am now anxious to get it together so I can do some fun and hopefully fancy quilting on it and get it onto a bed to show it off.

Projects are getting done, quilting is being finished, and I have bindings ready to sew on. It feels great to be making progress on several of the projects that have been stalled for too long.

Last week I drove down to Oklahoma to Kamp Kutti Uppi, a four-day (Thursday through Sunday) quilting retreat hosted by the Kiamichi quilt guild from McAlester, OK. The camp was held at the Pickens Camp facilities within the Eufala Lake State Park. The facilities were a little more rustic than other retreats I've attended, having the main building for quilting and eating, bunkhouse style cabins, and a bath house a short walk away, but still totally acceptable and quite fun! About 27 women attended from around the area and from surrounding states (including me from Kansas and at least one gal from Texas). They had a very fun program that included an optional fabric exchange and free quilt pattern to make, the Dirty Quilter game on Friday night, and a camp round robin quilt that was completed and given to the winner of a drawing of those who worked on it before camp ended. It was all very fun indeed and I definitely plan to go back next year! 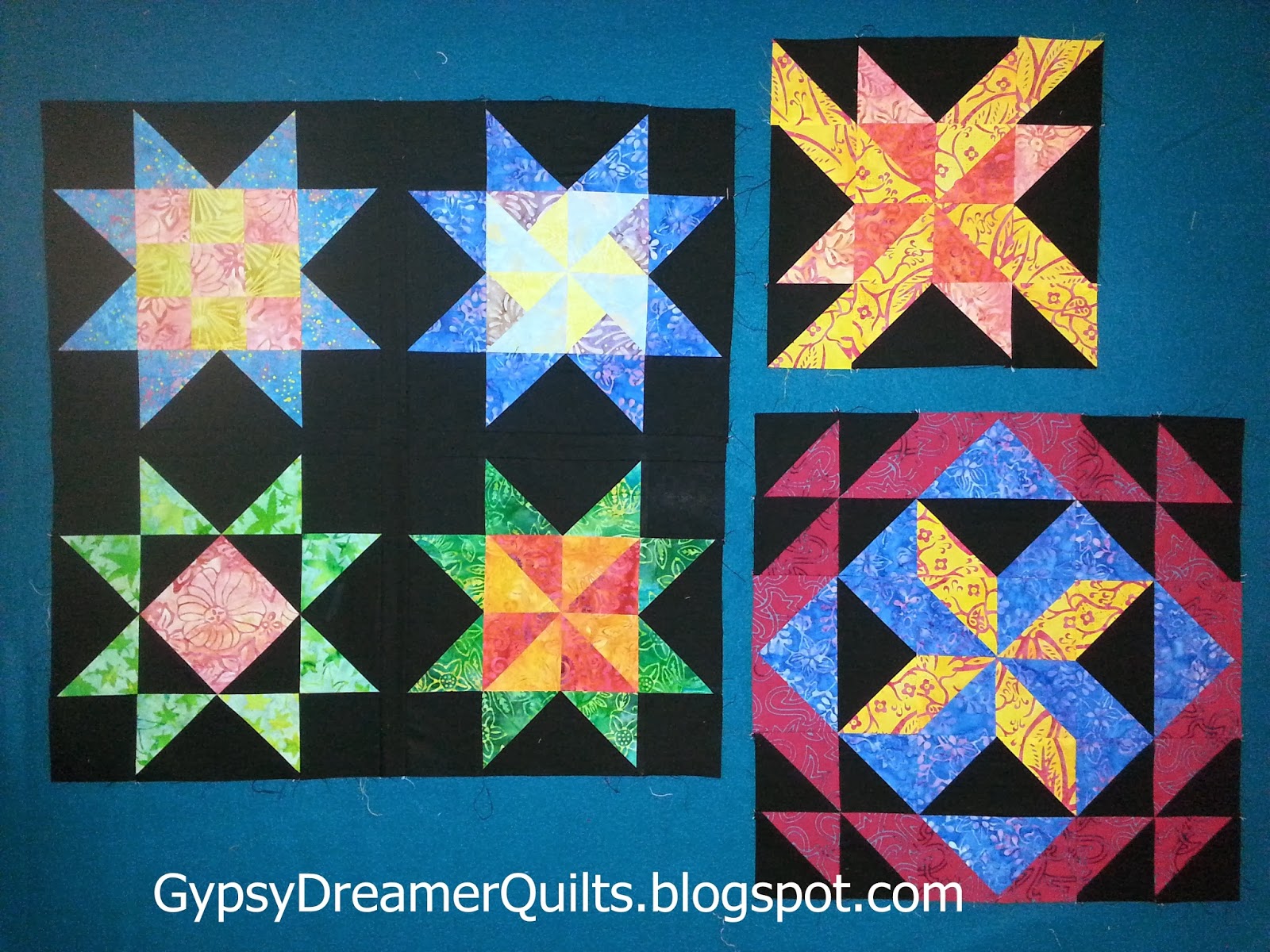 Mostly I worked on my Delightful Stars blocks for the Aiming for Accuracy quilt-along I joined on Facebook and Craftsy. Having gotten buried in school work recently, I was several blocks behind and wanted to catch up. Working with the beautiful batiks I've been collecting and using a black Kona cotton background, this will be a gorgeous quilt when completed!

Once those were caught up, I moved on to the fabric exchange. Those who were interested in participating were encouraged to bring 14 2.5" x WOF strips and 40 5" squares of black/white/gray fabrics to exchange upon arrival. If we wanted to make the free pattern available at camp, we also needed to bring 1.5 yards (or more) of a neutral color of our choice. I chose a hot pink Kona cotton that I have since learned is named Pomegranate. I love the vibrance against the black/white/gray prints! 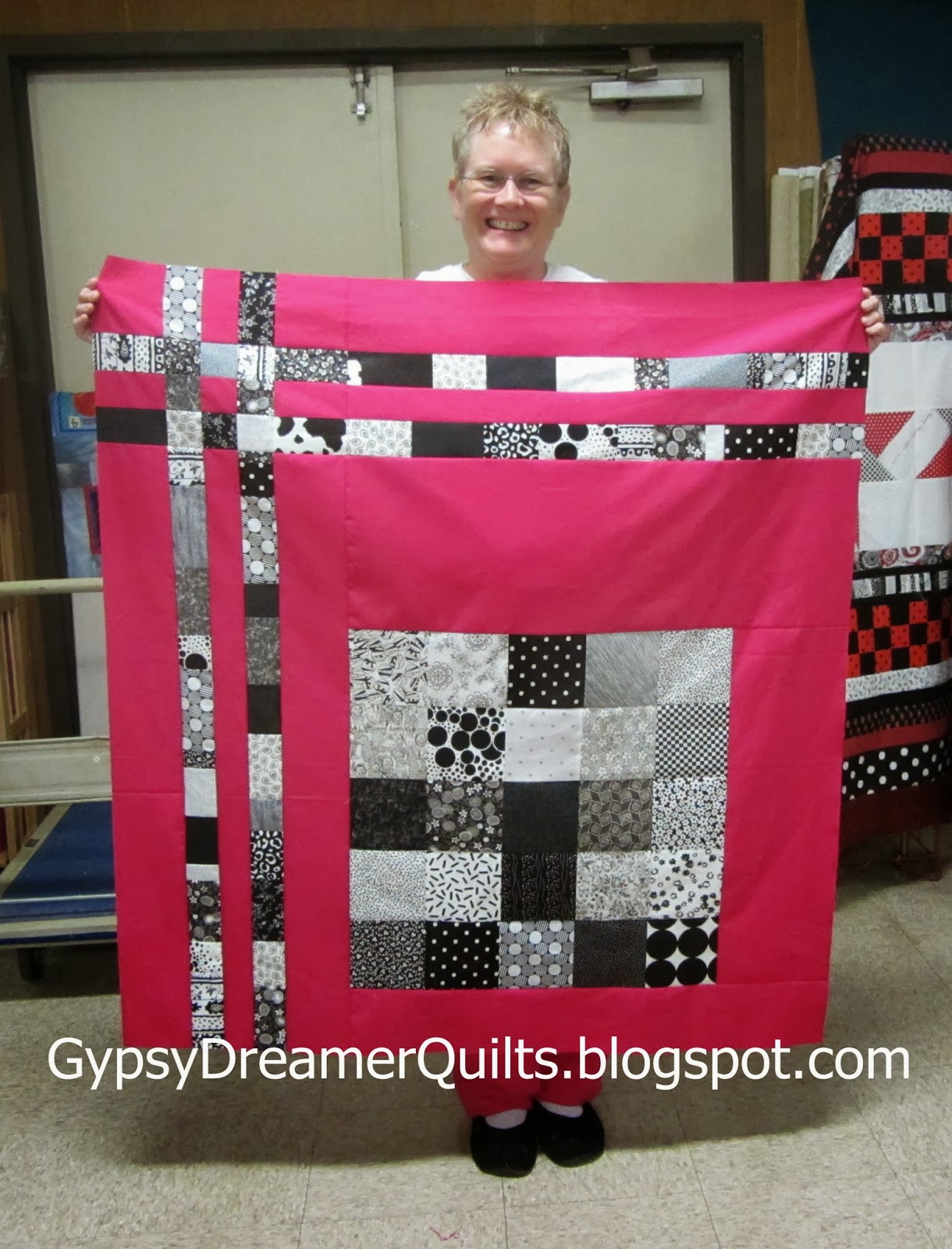 The pattern was fairly simple and before I left on Saturday afternoon (yep, a day early because of the snow and ice between me and home that was starting Saturday night) I had a throw size quilt top made! 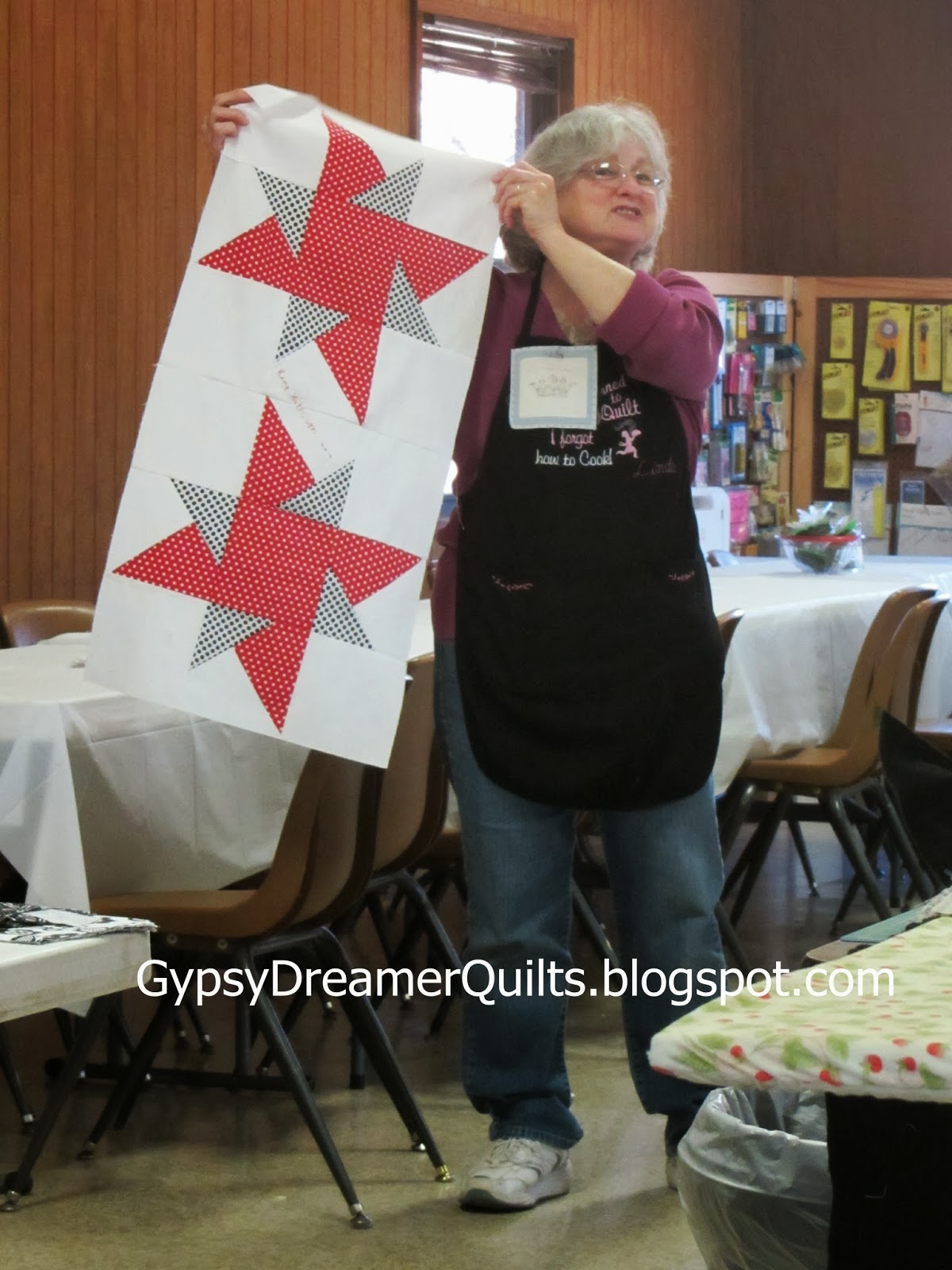 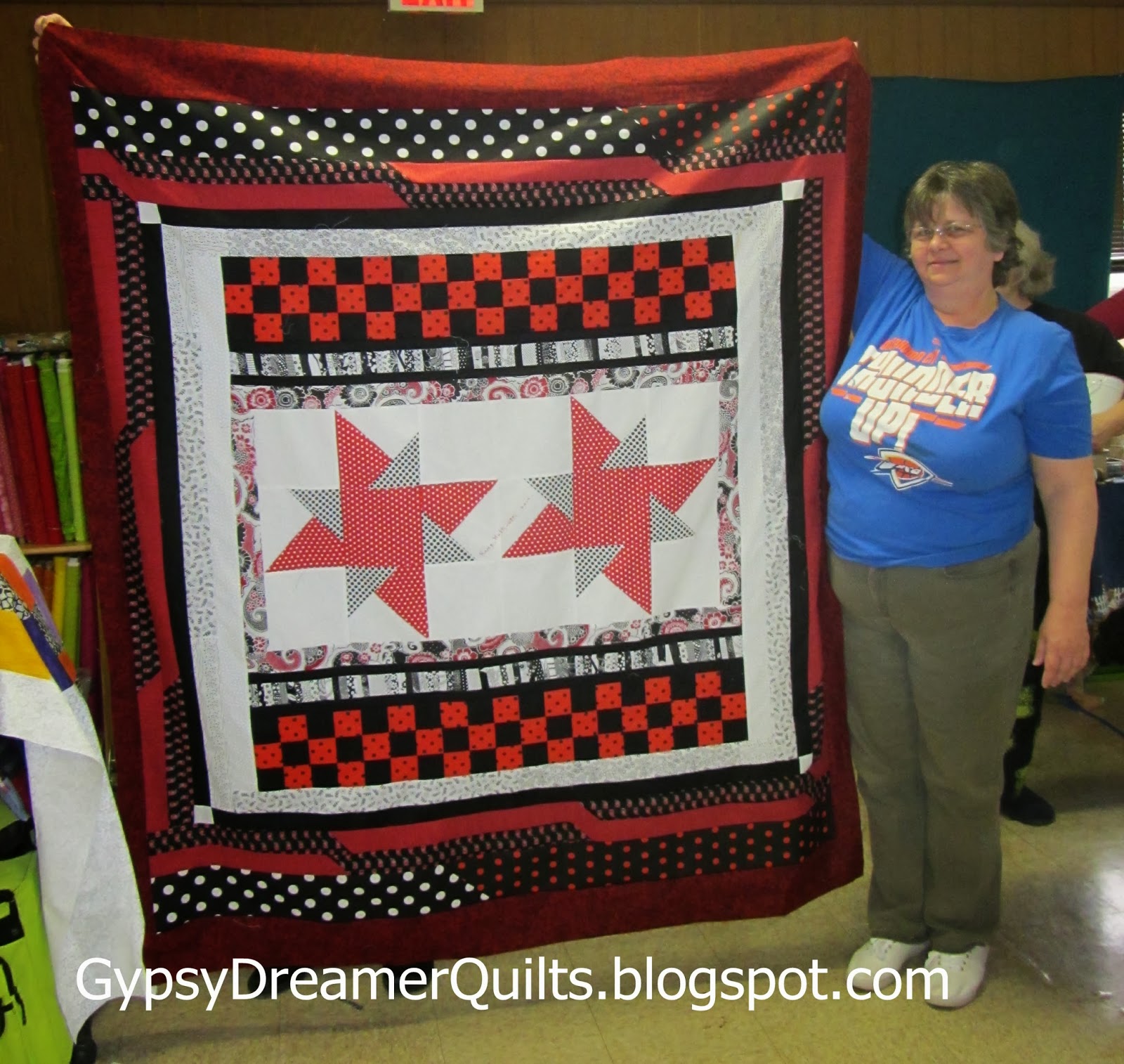 The round robin quilt these gals make during the camp weekend was great fun! It started out with a starter block made and brought by the recipient of last year's camp round robin quilt. These two stars Linda is holding were the starting point and throughout the weekend whoever wanted to work on it could add rows or borders as they pleased until, at the end of the weekend, the names of those who worked on it would be thrown in a hat and a winner drawn. There were several vendors in attendance, so if campers wanted to work on it but didn't have the right colors in their retreat stash, they could purchase fat quarters or other amounts of fabric to work with. It's amazing how it turned out and Paula was so pleased to win! Next year she will make a center starter block and let the camp chairman know ahead of time what colors/theme she chose so campers can better plan to bring something to add to next year's round robin quilt. 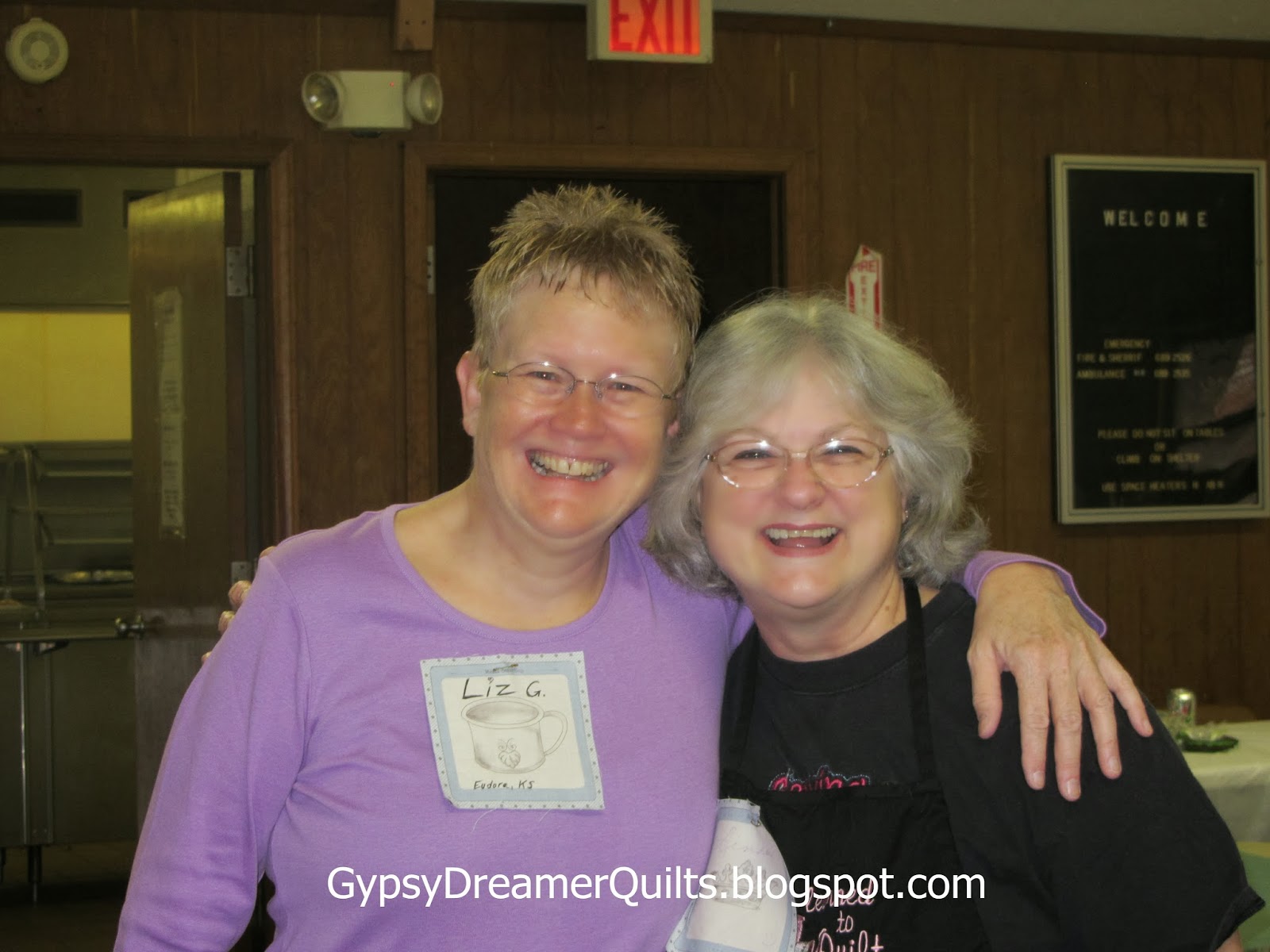 What made Kamp Kutti Uppi even sweeter was the fact that I reunited with a friend from Pittsburg High School (Pittsburg, California) some 42 years later! Yep, even though we hadn't seen each other in decades, the reconnection was instant and we had a blast! After reconnecting on Facebook several years ago, Linda and I found that we are both now quilters living in adjoining states in the midwest. As coordinator for Kamp Kutti Uppi, she had invited me to attend some months ago. Once it got closer I couldn't wait to get down there to see her and to meet a whole bunch of new quilty friends.

Although I was sorry to have to leave early, I was so grateful for having made that decision. I drove into freezing mist a couple hours into my nearly 5-hour drive, and the snow had started falling at home before I got there. Chatting with Linda after I got home, I learned that I wasn't alone in my decision. The group of 27 had dwindled to 12 locals by Saturday evening. I'm already looking forward to next year's camp and hope to make it an annual event. As a Gypsy Dreamer who used to dream of gypsying to contra dance weekends, now I'm gypsying to quilt camps. And I couldn't be happier!

More snippets from the sewing room soon,
Liz
Posted by Elizabeth at 7:48 PM No comments: