Where did this past year go?!? I could swear we just decorated for Christmas a few weeks ago and now it's not only time again, it's upon us this weekend! To say 2017 was busy is an understatement. My life took several unexpected twists and turns--all for the better--that have made it quite an adventure a this point. 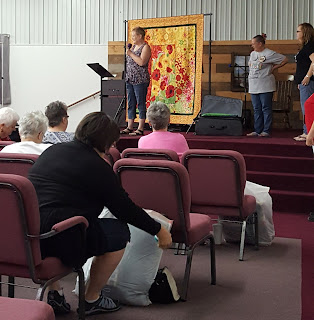 Early in the year my trunk show of Hexified Panel Quilts took off like crazy. By the end of November I had given my talk and showed my quilts to 16 guilds across Kansas and Missouri. More are schedule well into 2018 and a couple into 2019, and new invitations keep coming in. This is so exciting!

In June I was invited to teach beginning sit-down quilting at the Kansas City Regional Quilt Festival. Having never taught at a quilt show before, it was quite a production getting ready for 4 classes in 3 days! Yep, just say it... I'm crazy! It came off great, the classes were well attended and everyone was happy, having learned new techniques or tips during the classes. 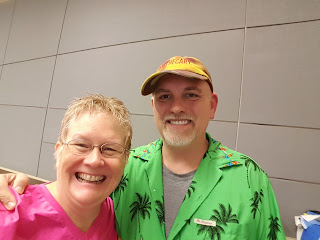 And, at the end of the festival I got to take a class myself with Jamie Wallen! What an incredible treat this was, to learn how to draw and quilt mystique feathers and shapes! 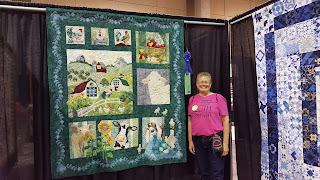 The final day of the festival as I was wandering through and taking more photos of the quilts, ribbons were being hung on various quilts in the guild display section. I was excited when I came across the "And On That Farm" quilt pieced by my friend JoAnn Clouse and quilted by me. It had a big blue ribbon hanging on it for Viewer's Choice for Best Machine Quilting!

Throughout the year I have continued teaching my Hexified Panel Quilt workshops at several quilt shops in Baldwin City, Eudora, Overbrook, and Leavenworth, Kansas; for guilds in Oskaloosa and Emporia, Kansas; a workshop in Branson, Missouri, hosted by the Quilted Cow; plus three workshops in California during our fall trip at the home of my friend Marsha in Antioch, at the Quilt Corral in Willows, and for the Flying Needles Quilt Guild in Woodland. So many people are excited about this twist to the original One Block Wonder technique that I've given a twist by making the tops out of six panels for the hexies that are color-flowed around a seventh uncut panel. The quality and variety of the projects made by my students continues to amaze even me! The uniqueness of each project is stunning!

I entered two quilts in the 2017 MQX Quilt Festival in Springfield, Illinois, that was held in late September. At the encouragement of the director of the festival after she saw one of my quilts on Facebook, I entered two quilts. Garden Rendezvous Reimagined is an original design Hexified Panel Quilt made and quilted by me. Contessa in Diamonds, also an original design, is a variation of the One Block Wonder technique that was created by me and quilted by Julia "Quiltoff" Larina of North Kansas City. Both were juried in and, although neither won a ribbon, it was a fabulous experienced having my quilts accepted into a juried show to be judged up against some of my quilting idols, and getting to attend and be at the awards ceremony with those who did win. Quilts in the works now are being planned to be entered in juried shows in coming months. 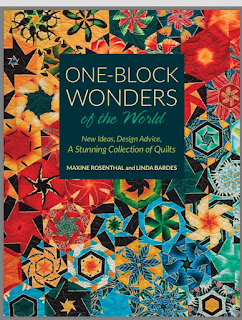 A huge honor that happened this year was to be selected as one of 28 quilters from across the US and around the world to have their quilts featured in One Block Wonders of the World, a new book by Maxine Rosenthal and Linda Bardes (2017, C&T Publishing). Two of my quilts--Wanderlust: Paris in Spring and Poppy Explosion--were selected, shipped to California where they were photographed, and in October my copies of the book that I had pre-ordered arrived. Not only were my quilts in the book in several places, but Poppy Explosion is one of three quilts featured on the back cover!

In the midst of all this quilty excitement, on July 1, 2017, I married Mr. Leslie Jerome--a man I met at a quilting retreat. Yes, he's a quilter! Three of his sisters are in one of the quilt guilds I attend and he joined them for a weekend retreat in August 2016 while visiting from Mississippi. That weekend I was teaching my Hexified Panel Quilt workshop and made he jumped in, turning his first Hexified Panel Quilt that he turned into a QOV for his brother.
Being a retired ceramic tile installer, he had started quilting after retiring, first making a sampler quilt for his granddaughter. The One Block Wonder and Hexified Panel Quilt techniques have became a new creative outlet for him. By November, several months after the retreat/workshop weekend, he called and our conversations began. He visited in December, came back in February, and by April had moved to Kansas to be with me. Now we are designing and creating quilts together, and having a marvelous time sharing a very special life that neither of us ever expected to have at our ages.  Never say never! God/Universe may just have other plans for you.

More exciting things are in the works including making samples and becoming a featured quilt artist. Stay tuned for more adventures in 2018! I promise I'll do better in keeping up with the blog, even if it's just a quick note once a month.

More snippets from the sewing room soon...
Liz
Posted by Elizabeth at 1:23 AM 1 comment: