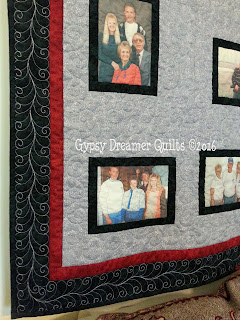 Both quilts included photos transferred onto EQ Printables premium cotton lawn inkjet fabric sheets. This particular brand is my favorite as the fabric is a high 240 thread count that feels much more like nice quality quilting cotton and holds the color very well. The photos on each spanned from the couple's wedding portraits to their 50th anniversary photos, and included photos of them and their children through the decades. 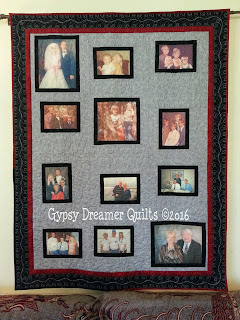 The first quilt was done in grey, red and black, colors used in the couple's home. Mary was very pleased to have the completed quilt in time to present it at the 50th anniversary party this summer.

Following the presentation of the first quilt, Mary contacted me again and asked if I would make the second quilt for the other brother and his wife. Being Seattle Mariners fans, we chose their colors of blue, green and silver for the piecing. 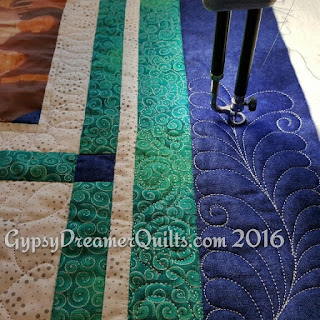 The second quilt, which also included photos through 50 years of marriage, children, grandchildren, and their first great-grandchild, is a surprise that will be presented to the couple at Thanksgiving by their children. Mary and her husband drove to Baldwin City today to pick up the quilt in time to ship it to their niece in Seattle in time for next week's holiday gathering. 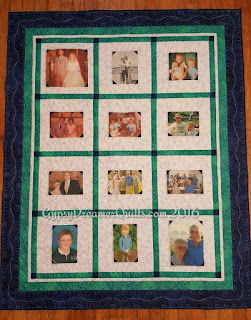 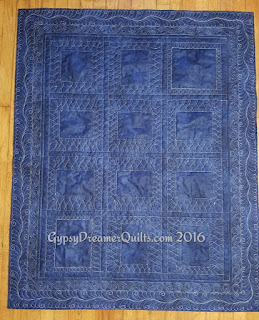 I tried my best to give each a unique look while still working with a 3x4 layout of the 12 photos included. All piecing was done with Aurifil 50 weight cotton thread. The quilting was done on Sassy, my HandiQuilter Sweet Sixteen sit-down, with cool grey Glide thread, which provided a perfect silver tone on each of the quilts. The blue backing on the second quilt is the perfect backdrop to show off the quilting.

Now I'm on to other projects for Christmas, which is fast approaching!