Posies and Tweets awaits a great-great-niece!

I'm blessed to be great auntie to my nieces' and nephew's children. They're all growing up so fast with two of my great-nieces now married. The oldest had her daughter in December 2013. I made Opal's Owl for her from the Remember Whooo Loves You pattern. Little Opal didn't get her quilt until her first birthday because I entered it in the county and state fairs where it won blue ribbons! The quilts I have made for my great-nieces' babies were chosen because the girls' MomMom, my sister-in-law Cindy, truly loved Irish Chain quilt patterns. It seems like nearly all of the UFOs she left behind when we lost her to cancer were Irish Chains, from miniatures to full size quilts. I stitch little bit of their MomMom (gramma) into each quilt that I make for them by choosing the pattern she loved most.
My middle great-niece and her husband just celebrated their first anniversary and are due with their first child--a baby girl--any day. I spoke to my niece several months ago and asked if they wanted me to make a quilt for the new baby. I got a definite Yes as I'm now filling my sister-in-law's shoes as great-auntie/quilter. While spending a getaway weekend in Branson, MO, my friend and I went to several quilt shops where I found some fabulous "shabby chic" fabrics that my niece said would be perfect after I messaged a picture to her. That was the beginning of Posies and Tweets, yet another Irish Chain baby quilt.
This time I chose to make a double Irish Chain out of the soft brown and light blue and feature the pink print with the birds sitting on blossoming branches in the offset blocks. I played with the layout in EQ7 in order to get a sense of what size blocks I would need to make the scale I wanted for the baby quilt. Once I knew what sizes I needed, I cut the strips and strip-pieced the chain blocks as much as I could to speed up the piecing. Once the blocks were made and rows were layed out, I sewed rows together and pretty quickly had the top completed. 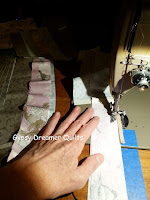 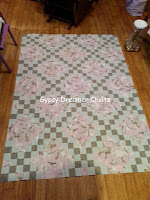 I added an inner border of the brown before adding the final border of the pink, pinned the layers and started quilting. I had purchased enough pink flannel to back it with, but thought the finished size would be smaller. I had come up short, but with a strip of leftover blocks added along one edge, I made it stretch quite nicely. I ditched all of the seams before quilting simple orange peel in each of the brown squares to make the chain pop, added swirls in the brown inner border, and swirly feathers around the outside border. However, I was stumped how to add something special to the pink blocks. 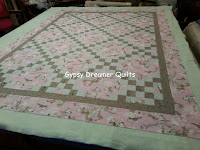 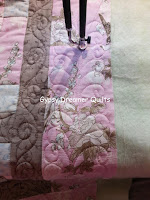 Looking at the quilt from the back after completing all of the stitching in the ditch, I could see possibilities, but wasn't sure how to accomplished the look I wanted. Then, while sitting at my Sweet Sixteen, I happened to spot a set of rulers I had purchased recently that include half-circles. I had a light-bulb moment and thought how fun it would be to add some curves to all of that straight piecing.
Being a huge fan of 54-40 or Fight blocks made with tri-rec units that create a curved look, I wondered about using the half-circle rulers to create curves where there were none. I got out my chacoliner and drew four half-circles on point in each of the pink blocks, making an on-point curved diamond in each. Following those lines, I quilted the curves and added a variety of free motion flowers in the pink blocks to complete the quilting.
As I was adding the final stitches to the binding, my granddaughter and I talked about what to name this quilt. We came up with Posies & Tweets because of the pretty little blossoms on the branches the birds are sitting on. I'm hoping that once little Maddy arrives that I'll get a picture of her wrapped up in her quilt to add to my scrapbook. Welcome to the world, Madelyn Estella! 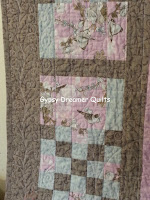 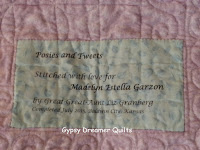 A week or so into making the quilt, I got a phone call from my niece letting me know that the baby shower was scheduled for July 11 in Fresno, California. I knew I wouldn't get to attend, but had a deadline by which to get the quilt finished and shipped in time for the shower. Amazingly, I made it! I was so excited to have it done that I packaged it up and had it ready to go to the post office when I realized I hadn't taken any pictures of the completed quilt! I carefully slit the tape on the bottom of the box (the label was over the top flap, securely taped down), took it out and hung it up in my living room and took several pictures. Then it was back in the box and off to the post office. 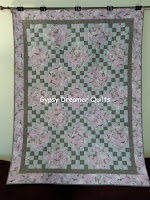 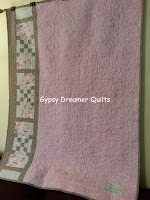 It's amazing what we can accomplish with a request and a deadline to go with it. This quilt was completed in just a few short weeks around my teaching schedule. Fabrics were purchased the first weekend in June and it was shipped the first week of July in time to arrive the day of the shower.
I hope you've enjoyed this journey of love, making a quilt for my newest great-great-niece.

A Busy Summer Obsessed with One Block Wonders

School is starting and summer is nearly behind us. The weather is still warm with 90s expected the next week where I am here in northeast Kansas; however, overnights are cooling down indicating that fall is on its way. I've had a busy summer going to quilting retreats, teaching classes, quilting for clients, and making quilts for myself. Some of those quilts were class samples, one as a gift for my great-niece for her new baby due this week, and some just for fun.

As a shop sample, I explored using panels for a One Block Wonder (OBW), purchasing 7 panels and cutting up 6 to make the OBW hexies and then framing the 7th as part of the top. The result was Wanderlust, pictured below. I added a flange border around the central panel to set it off. I entered it in the Lyon County (Kansas) Free Fair and it won the 1st Place blue ribbon and the 2015 Best Use Of Color cash award! In two weeks it goes to the Kansas State Fair and we will see whether it places in the larger state-wide competition. 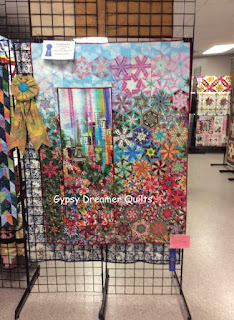 This year has become the year of One Block Wonders. Including Wanderlust, I've made 5 so far and have fabric already selected for at least 5 or 6 more! Each one will be different with either yardage repeats or panels being used. The other 4 tops are done and each needs to be pinned and quilted, something I plan to so very soon.

Of the OBW tops waiting to be quilted, I managed to squeak a mini wall hanging out of a yard of fabric that I picked up at the Missouri Star Quilt Company on a visit earlier this year. The Stitchin' Grannies, our Wednesday morning quilting group, were interested in learning more about OBWs and we worked together on one of our sew-days. Using the butterfly print pictured above that was fairly small scale, I cut just 2.5" strips to make the triangles for the OBW hexies. The top is just 26x36" and will have a few butterflies from the original fabric appliqued in the border before finishing.

The next OBW I tackled was another one featuring a framed panel. I used Pandora, a challenge fabric selected by the Facebook group "One Block Wonder Forum". The panel features gorgeous poppies and lilies in brilliant yellows, oranges and reds. I once again purchased 7 repeats and cut 6 up to make the hexies. For this one, being a larger scale print, I cut 3.25" strips to get finished 6" hexies once assembled. This top I made larger, adding a border making it more into a generous throw that will finish at approximately 68x75". 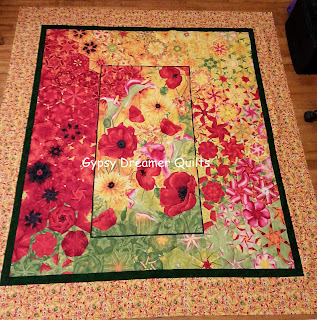 Finally, this past couple of weeks I have been working on two wall hangings made from a beautiful nativity fabric. I missed out on purchasing panels before the shop sold out; however, I purchased the large scale print instead with 7 repeats and chose to fussy cut the large designs to frame in the wall hangings.
I split the fabric down the center fold, using half for each top. I cut two sets of 2.75" strips, one with the grain and the other across the grain in order to get a different mix of cuts to make the hexies different in each. For the first one I fussy cut the main design features out as hexies and inset them with y-seams as part of the overall design. The blue border around the large hexie fussy cut on the first one will have a red satin cording frame appliqued to help break up the color flow and bring the eye to the main feature before quilting. For the second one, I made larger rectangular cuts of the two main design features that were framed within the overall OBW design similar to the panel quilts.


It has been great fun playing and being creative with the designs on the OBWs. Changing up the OBW technique and framing designs within the color flow gives such a different look. The next fabrics are ready to be cut so I can continue playing with unique layouts.

Other quilts that have been made will be written about soon as I settle back into a fall teaching & quilting schedule. I hope you've enjoyed seeing these unique quilts!

More snippets from the sewing room soon...
Liz
Posted by Elizabeth at 9:52 PM No comments: