It Should NOT Snow on Retreat Weekends!

I was blessed to be able to attend the annual Kamp Kutti Uppi at Lake Eufala, Oklahoma, last week for the second time. One of my high school buddies from back in the day in California is now a fellow quilter who lives in Oklahoma, just 5 hours away! Sweet Linda is the director of KKU and since we reconnected (thanks to Facebook!) we have begun scheduling time together at quilt retreats twice a year. No better way to spend time with an old friend than across our respective sewing machines while quilting! This year a quilting buddy from my local guild went along with me to join the fun and to be company for the drive.
There were, I believe, 23 quilters, plus two excellent cooks! We all stayed in the bunk houses at the Pickens Family Campground at Lake Eufala, took our showers in the bath house (yep, that also means running across the property between buildings for night-time potty calls!), and stitched & ate in the lodge. One family brings three generations of quilters with them--mother, daughter and granddaughter! We all had so much fun! 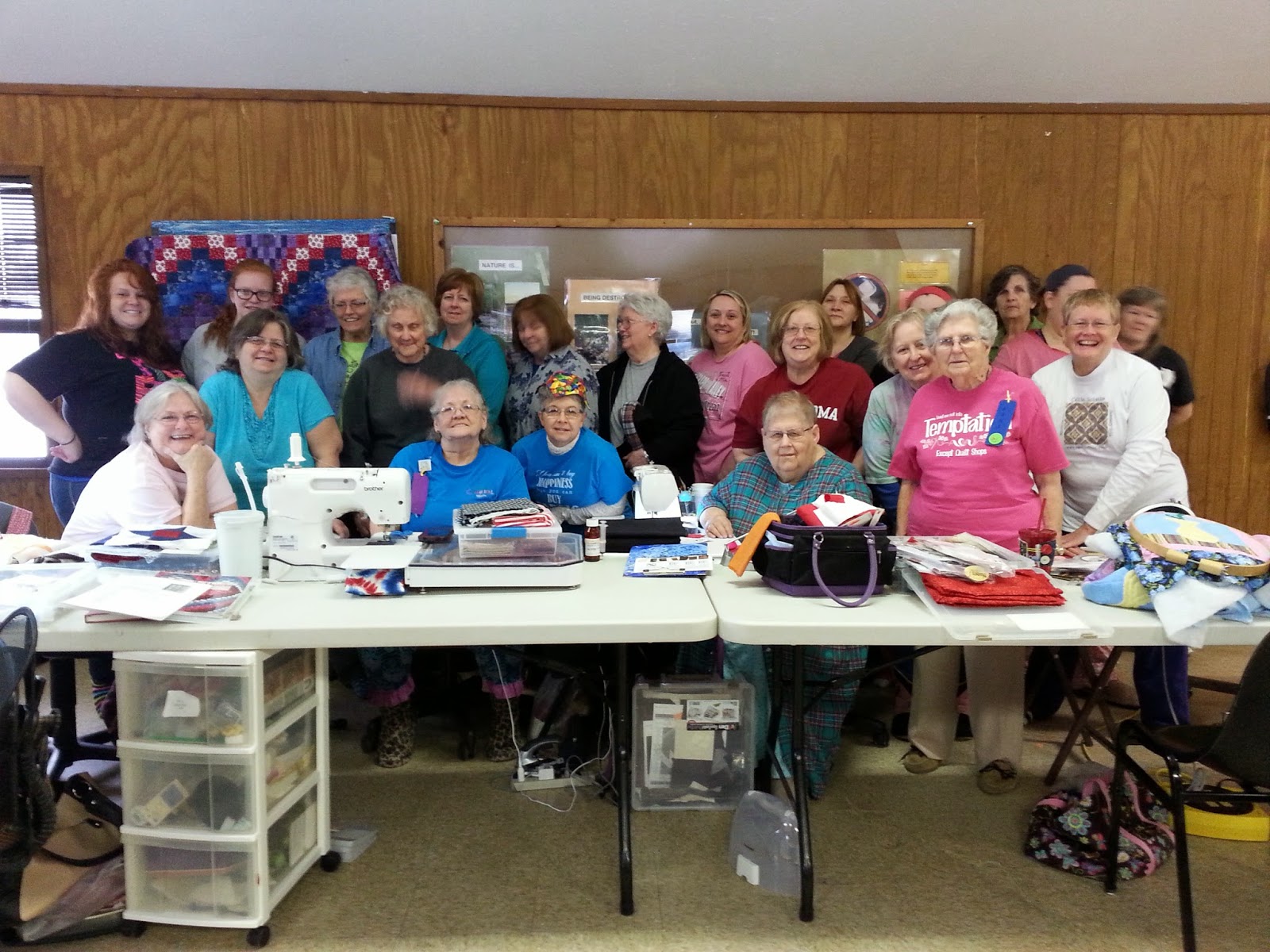 One of the fun activities at KKU is a round-robin quilt that gets made during the weekend. All those who add to and work on the round-robin get their names put in a drawing and are eligible to win it! Whoever wins is supposed to finish the quilt (quilt & bind) and bring it back the next year to show off. This is last year's KKU round-robin, the first one I took part in. The starter blockswas the two-star section in the center and throughout the weekend more borders were added. Paula (in the pink) won and brought it back finished, and was happy to use it this year with the cold temps and snow! My contribution were the two black & red checkerboard rows on either end of the center section. 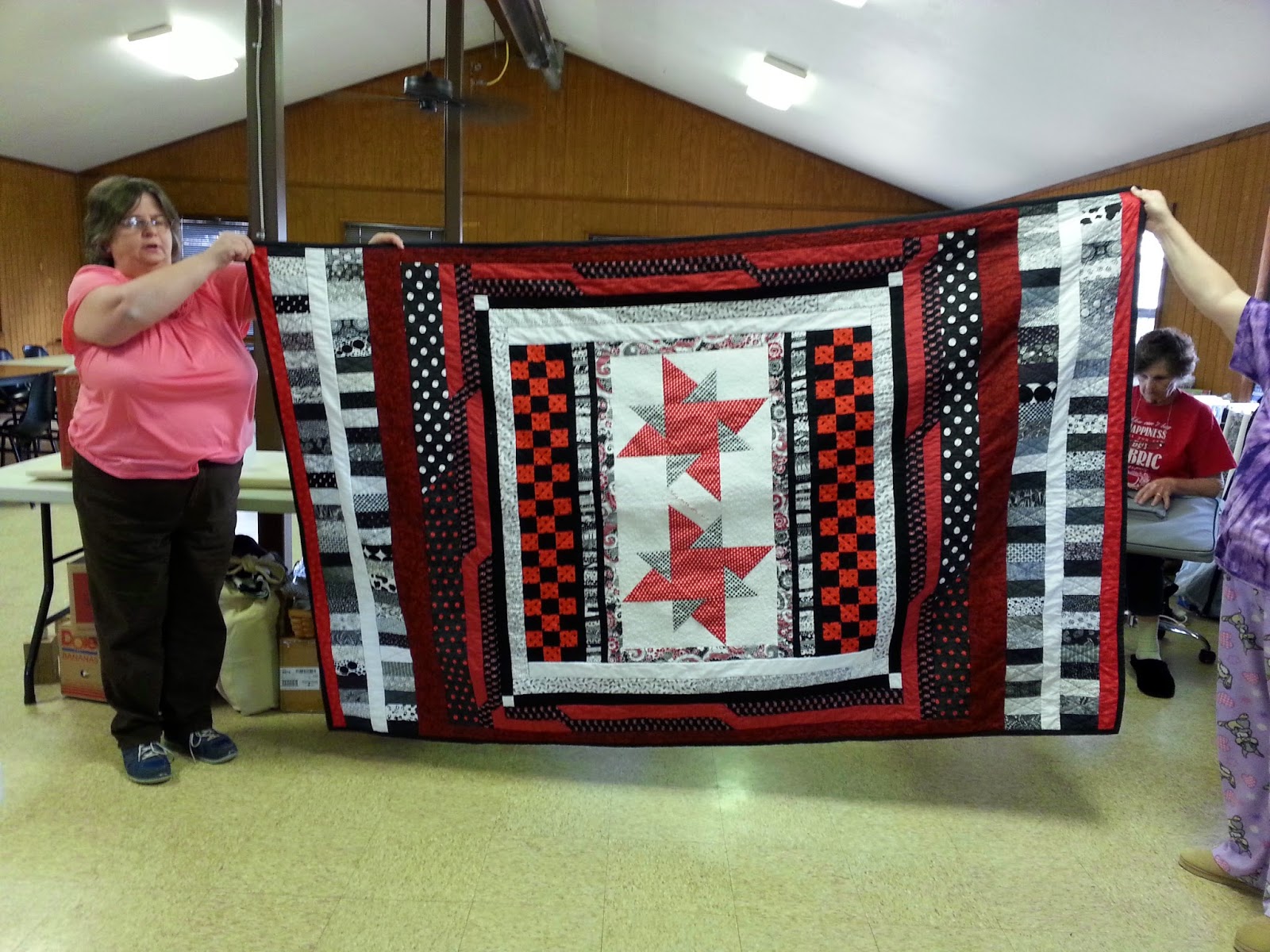 Paula brought the 2015 round-robin starter block, the yellow-black-green wonky sashed center that had a hilarious cartoon of a fabric avalanche. The first camper put it on-point and away we went from there! Our only "instructions" were that this year's quilt would be bright! Sherry and I worked together and added the bright rainbow piano key borders to each side to help widen it out some. This awesome top grew as campers added borders and accents during the weekend. Some campers brought bright scraps or fat quarters from their stashes, while others dug through the tubs of scraps that are always there for whoever needs them to find just the right touch for their projects. Rita won the drawing for this 2015 quilt and will complete it to bring back to the 2016 KKU, as well as bring the starter block for the next round-robin. 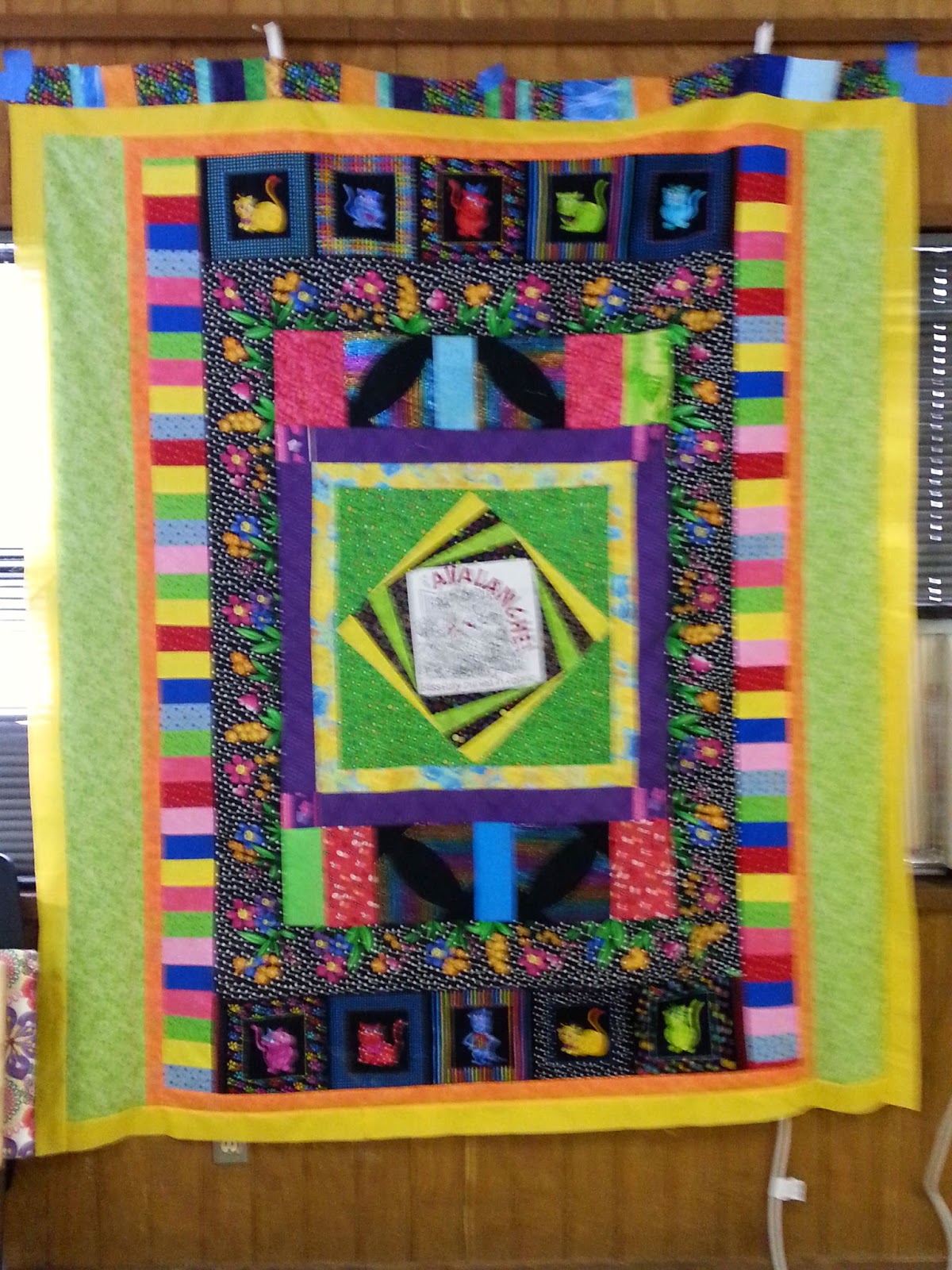 This year I only brought 4 projects with me, instead of the 10 that I schlepped down to OK and back last year, leaving most untouched. My major goal was to finish a new sampler top for a Quilting 101 class I'm teaching and to make a sample for a Cathedral Window class coming up soon. The first time I taught Q101, I used the shop owner's sample, which was fine, but I wanted to tweak it to include some of the techniques I know I use most. The blocks are fairly simple, and do include some curved piecing and a Dresden plate among the six blocks. That project went very well and was done on the first full day of stitching. 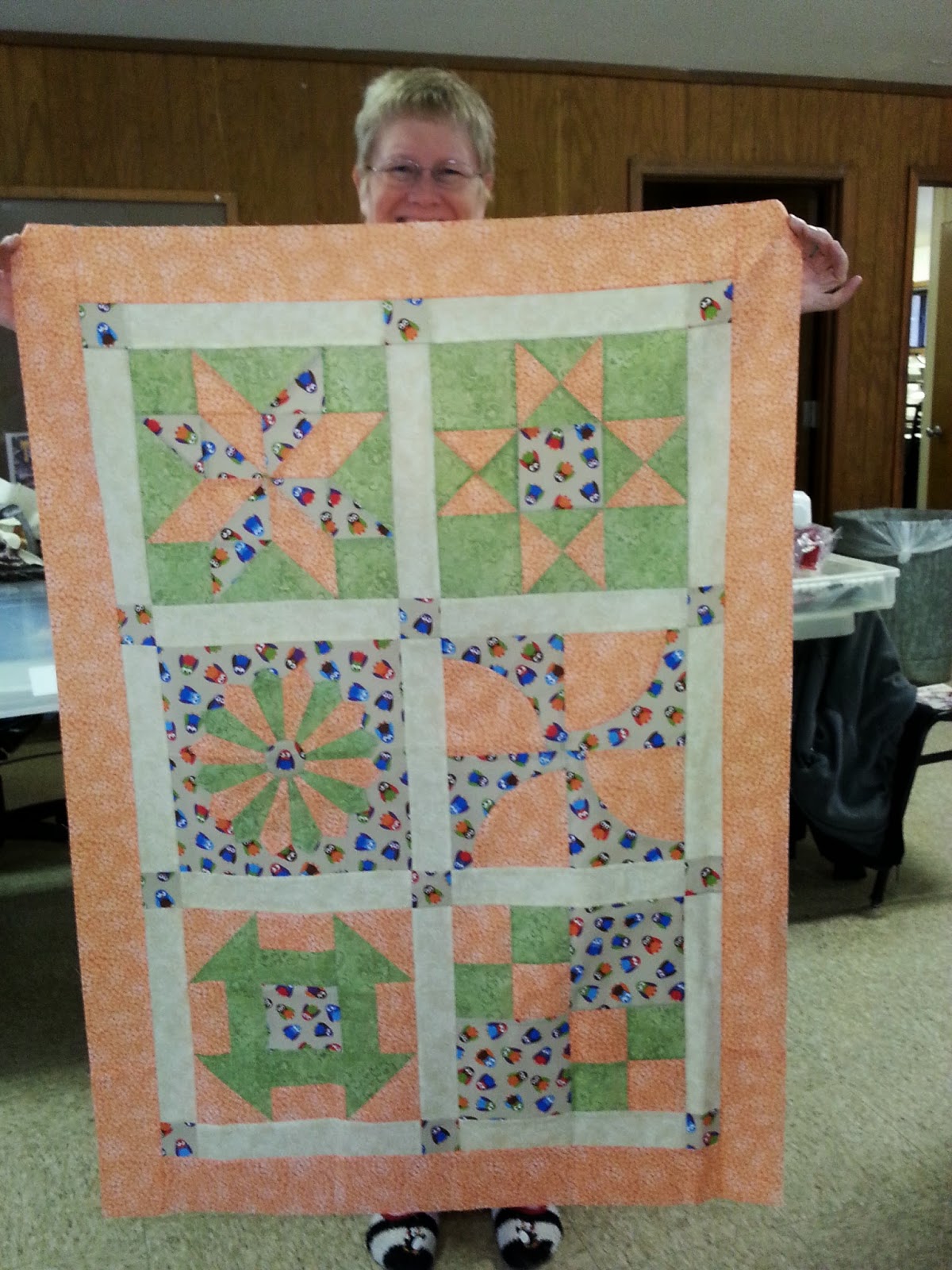 Next I was on to the Cathedral Window sample. I had seen them, had fallen in love with them, but had never tried them. So, I found a great tutorial on the Moda Bake Shop Recipes blog for a Charming Window Pillow Cover, printed it out, and took it and the required materials with me. On day two I dove in before breakfast and ten hours later, I had this beautiful little ~14" square of 9 cathedral window blocks sewn together and ready to show my students. Wow! Can you say Origami for quilts?!? I loved doing it, but I can definitely say I won't be making a whole Cathedral Windows quilt! Blessings on those who have and those who will--I will admire you from afar. 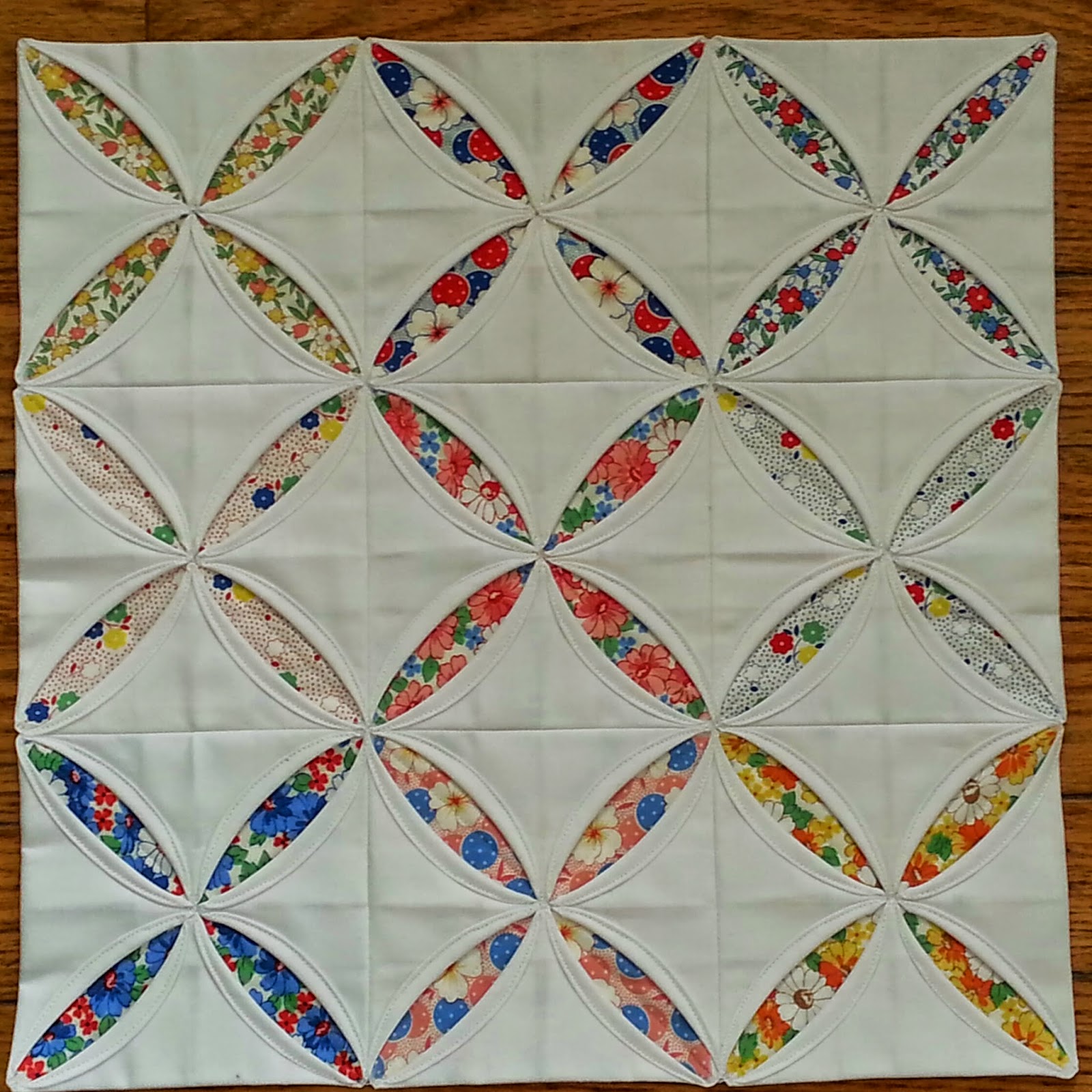 The four day retreat, again this year, got caught in some late season snow & ice. Last year I left on Saturday by noon (the retreat goes from Thursday at 9am through 11am Sunday) because of an ice storm heading towards northeast Kansas where I was headed. Indeed I drove home in sleet and freezing rain and just a few miles from home hit a point where my windshield was on the verge of being frozen over with no clear spot to look through. I did make it home safely, put my car in the garage to be unloaded later, and hunkered down. The next morning I had several inches of snow covering said ice and was surely grateful to have made the decision to leave early. Once again, snow interfered with our stitching fun by moving into OK during the retreat time.

This year Sherry (my travel/quilter buddy) and I made a similar decision because it had already started snowing where we were, had been snowing at home some 4+ hours away, and the next day the forecast for where we were in Oklahoma was for freezing rain and ice! So, we packed up Saturday morning and headed for home.

We drove snow-packed roads most of the way home. No problems getting back to northeast Kansas; although, we did go a longer route just to stay on a more major highway and drove slower than usual which lengthened our drive home to just over six hours. The snow wasn't bad at home, but we heard later that the ice and sleet hit hard back at Lake Eufala! The walkways between buildings were sheets of ice, so the campers walked in the snow to keep from slipping down the hill to the bunkhouses. The state park rangers helped clear the road out to the highway, so the campers who stayed through Sunday could get home. It was a challenge, but all made it home safe and sound. Though we would have loved the extra day of stitching with friends, we were grateful to have made the decision to cut our retreat weekend a day short and get home safely before the ice.
I'm already on the list to go back next year to KKU! I'm meeting up with Linda again in August when our friend Marsha plans to fly to Kansas from California for our own private mini-retreat at my place! It's such fun being able to share our passion for quilting at mini-reunions together!