UFO Busting in 2016--Two-Step Through Oz is nearly there!

Let's see... I've only been quilting since 2006, but have completed over 60 projects from pillows to large quilts. Then I look in my closet and in the boxes around Sassy's table (the HQSweet16) and realize the number of UFOs could actually match the number of completed projects! Good grief!!! I had attempted to make 2015 a year of finishes, but fell short. This year is definitely going to be the year of finishing up old UFOs and I'm already feeling like I'm making progress. I've already finished binding two wall hangings from last year, plus adding hanging sleeves to a couple more. Time to dig deeper! 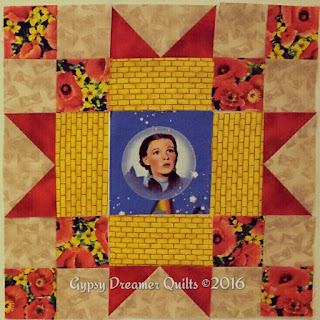 The first large project that came out of the UFO pile is a Wizard of Oz themed quilt that I started back in November of 2012 when I attended a weekend workshop put on by the Emporia Regional Quilt Guild in Emporia, Kansas. They had invited Pat Speth, known for her books on Nickel Quilts based on units made from 5" charm squares, to put on a 3-day workshop. I was so excited to be taking part in this workshop that I worked diligently all day and then went home to work late into the night on fussy cutting the centers for each block, and making additional units so I could have my quilt top laid out asap. During the workshop I got most of the sub-units made, and did manage to get two squares completed and up on the design wall to share.

Within a week after the workshop I had all of the blocks made and had a layout done on my floor, ready for the blocks to be sewn into rows. I had selected Pat's Texas Two Step pattern for my quilt. It looked so different from the sample pictured in her book because hers was made with batiks and I had chosen a very distinctive line of prints featuring the characters and themes from the movie, The Wizard of Oz.

What I didn't realize then, but found out soon after as I started sewing blocks together, was that I had sacrificed accuracy in my haste to be a "star pupil" at the workshop. Instead of making a few blocks correctly, I rushed through and didn't take the added time to measure and trim each sub-unit before assembling the blocks. As it turns out many of those nice points in the layout pictured above were chopped off. As I measured the already assembled blocks, I realized I had to trim them down before I could sew them together. Yikes! I finished sewing the top together, but was unhappy with myself for being so foolish (did I mention I'm a recovering perfectionist?) and put it away to deal with later after I'd cooled down. It was far too late to take it apart and fix it, so I had to come to terms with the fact that I had made a quilt I wasn't happy with as far as accuracy goes.

In fact, it was over a year later in March 2014, at a retreat at the Kansas Troubles Retreat Center in Minneapolis, Kansas, when I finished the top, finally adding the borders. Once the borders were on, then the process of piecing the back started. I had several photo-blocks from the movie that I wanted to include in the overall layout, so I placed them on the top to get a spacing I liked, before adding the additional Oz fabrics around them to make the overall pieced back. The pictures were pinned in place at the retreat and taken back home for assembly.
Once I got home, I continued to play with the layout of the picture blocks for the pieced back. Standing on my end-table gave me the best vantage point to take a picture from above since my living room floor was my design wall. The back got pieced, the quilt got sandwiched and pinned, and then once again it got stuffed into a box with other UFOs when I moved at the end of 2014.

Jump forward to January 2016, I'm determined to start knocking out old UFOs. I had pulled this quilt out to use as an example of what NOT to do for my Beginning Quilting 101 class and realized it was still pinned. I was sure I had at least ditched the rows, but apparently not. That afternoon after class I decided it was time to get it at least ditched. I cranked up the tunes on Pandora and went to work. Hours later all of the rows going both directions were ditched. The next afternoon I ditched around the subunits in the blocks, finding a path that allowed me to ditch every individual piece with minimal overlap-stitching. With a 1/4" line of stitching around the outer border, the entire quilt is ditched and I've decided that is enough. It's going to be used by my grandkids when they visit and probably again as a sample in my classes, so minimal quilting for a utility quilt is plenty.

When I got to the bottom of the quilt, I found there was one 4-patch that had been turned the wrong way. Rats! I hate when that happens and I miss it before quilting! Such is life--I guess it's like the Amish quilts, it has an error proving it was made by human hands.

Overall, I'm delighted with how this quilt is turning out despite its problems. I love the fussy cuts, especially the few blocks with movie quotes. To a non-quilter I'm sure it's amazing. It's only because I'm so picky that I think it not my best work. I've decided I'm going to machine stitch the binding down after I sew it on tomorrow since it's a fun quilt for the grandkids. No real reason to put the hours into hand stitching down what feels like miles of binding for a potential fort/picnic/campout quilt. It came out a super-twin measuring 70"x93".


Friday morning update: The binding is on and the top is complete! Two Step Through Oz is ready when the grandkids come visit next week! It's too long to hang up inside and too cold to go outside to photograph. Plus, we only got a couple of inches of snow, so the grass is showing through--not so good for pretty quilt on snowy background pictures. So, here it is, both front and back, hanging from the rod above my couch. It's draped over the couch, so has some funny ripples, but it's the best I can do at the moment. I'm just happy it's done!

Before I can pin any more of the UFO tops, I have to "release" more pins already in quilts that have been waiting far too long to be quilted. After finishing this one quilt, my pin box is magically half full! Rather than continue to buy more pins as I've done in the past (I probably have over 500 if I got everything quilted that is currently pinned!), I'm going to quilt, quilt, quilt, until I get caught up. Then I won't feel guilty about pinning another project! Among others, the UFO pile has two more Wizard of Oz tops (both king size!!!) that have yet to be pinned, not to mention quilted! I'm hoping they will both get knocked off the UFO list yet this year. Wish me luck!

More snippets from the sewing room soon...
Liz
Posted by Elizabeth at 5:28 PM No comments: