I have been watching the Quilting Galleries' Quilters' Show & Tell events for awhile now. I entered once before, but was just starting this blogging thing and didn't get many people to visit the site and vote. So, this week they were asking for Quilts for Little Ones and so I found the best picture and posted Jacob's Jungle! It's one of my favorite quilts that I've made and was such a fun challenge to figure out how to make all the rows even. It definitely challenged my math skills adding strips & sashes to square up those intentionally uneven framed fussy cuts. 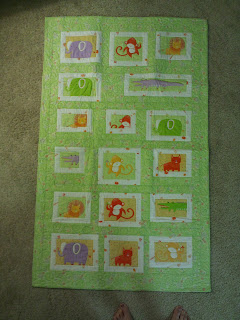 Having been gone most of the weekend, I'm just now getting back to it and realized I needed to post the link so people can go vote for my little Jacob's quilt. Here's the blog post to vote for the Quilts for Little Ones. Many thanks to any who go vote for Jacob's Jungle!

More projects are in the works and will be posted soon. Until then...

More snippets from the sewing room soon!
Liz
Posted by Elizabeth at 1:47 PM No comments:

It's WIP Wednesday and I'm posting for the first time in what feels like ages... again... Since last time I wrote, I finished my move and then left for nearly a month vacation to California and back again. It shouldn't take that long, but that's another story and another post.

I'm hooking up with Freshly Pieced's WIP Wednesday for those who want to browse around and see what I and other bloggers are up to this week.

[Note] Update August 8, 2013. Project complete, shipped, and received as planned. I've updated some of the photos below to the completed project and added some detail.

This week I am up against yet another deadline. My cousin's granddaughter Betsy contacted me on Facebook to ask me to make a memory quilt for her sister Shelby whose 2-year-old daughter died two years ago. Betsy sent me a whole box of fabrics, a few squares already made, and asked that I incorporate what I could of that collection into the quilt. 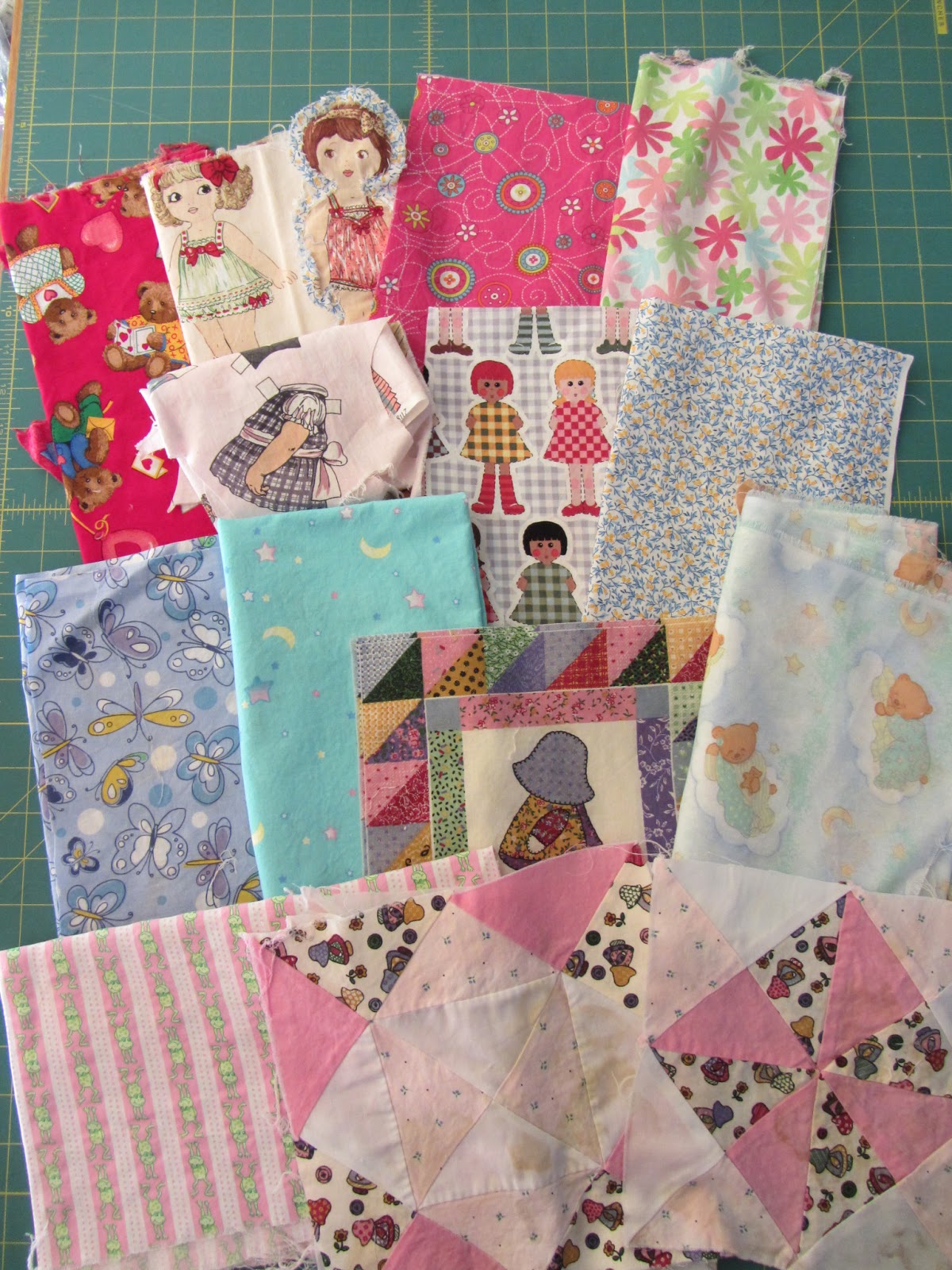 Betsy indicated in the note she sent with the fabrics that some had gotten wet and had molded. Despite this hurdle, finding there was mold on most of the pieces, I washed them all and did whatever magic I could think of to remove the stains, and then started cutting around the worst of the remaining spots. Of the eight pieced blocks included made by the girls' Gramma Connie (my first cousin), only four were useable. This one was so cute, but those stains were just too over-powering.

So, I raided my stash for fabrics to use for background for the 12" finished blocks I planned to make and then started playing. This quilt includes piecing, applique, photo transfer, and machine embroidery. I started with McCall's #M6412 as my inspiration and pattern for the applique blocks, added the other blocks I wanted, incorporated the pattern's triple sashing with contrasting 9-patch cornerstones, and this is what I came up with. Shelby's "Brooklynn Shay: Angel in Heaven" memory quilt. 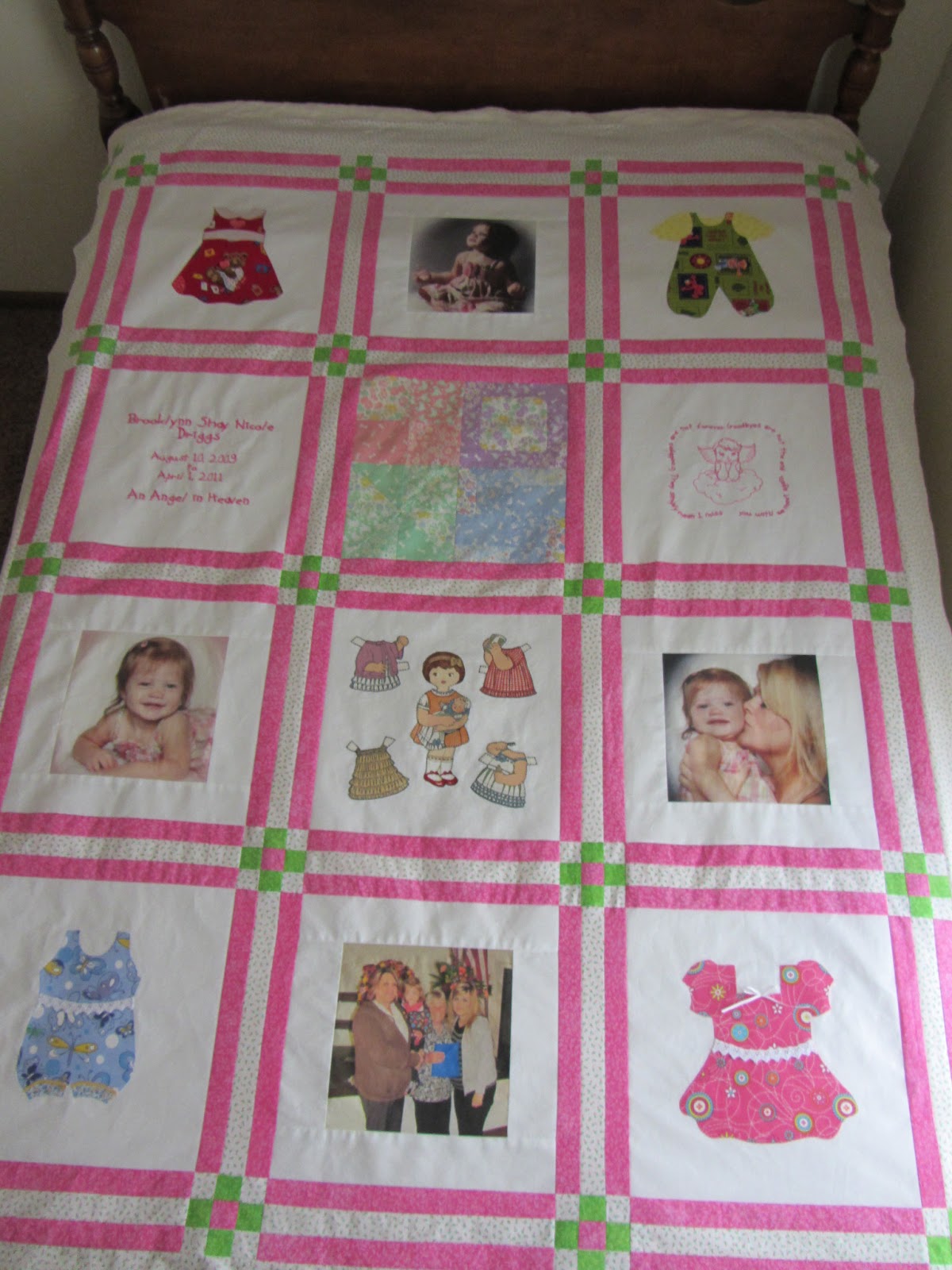 Below are updated closeups of the completed quilt (top & bottom halves) and a couple of blocks.  I found the poem stitched around the angel on a picture in Shelby's Facebook album and thought it fit with the embroidered angel. The stencil I used is a modified Dresden Plate with radiating lines that fit three blocks perfectly. On the applique blocks, I echoed the outfits and did a loopy doodle around the paperdoll and her dresses. The frames around the photos were quilted with a heart design in a pale pink variegated thread. 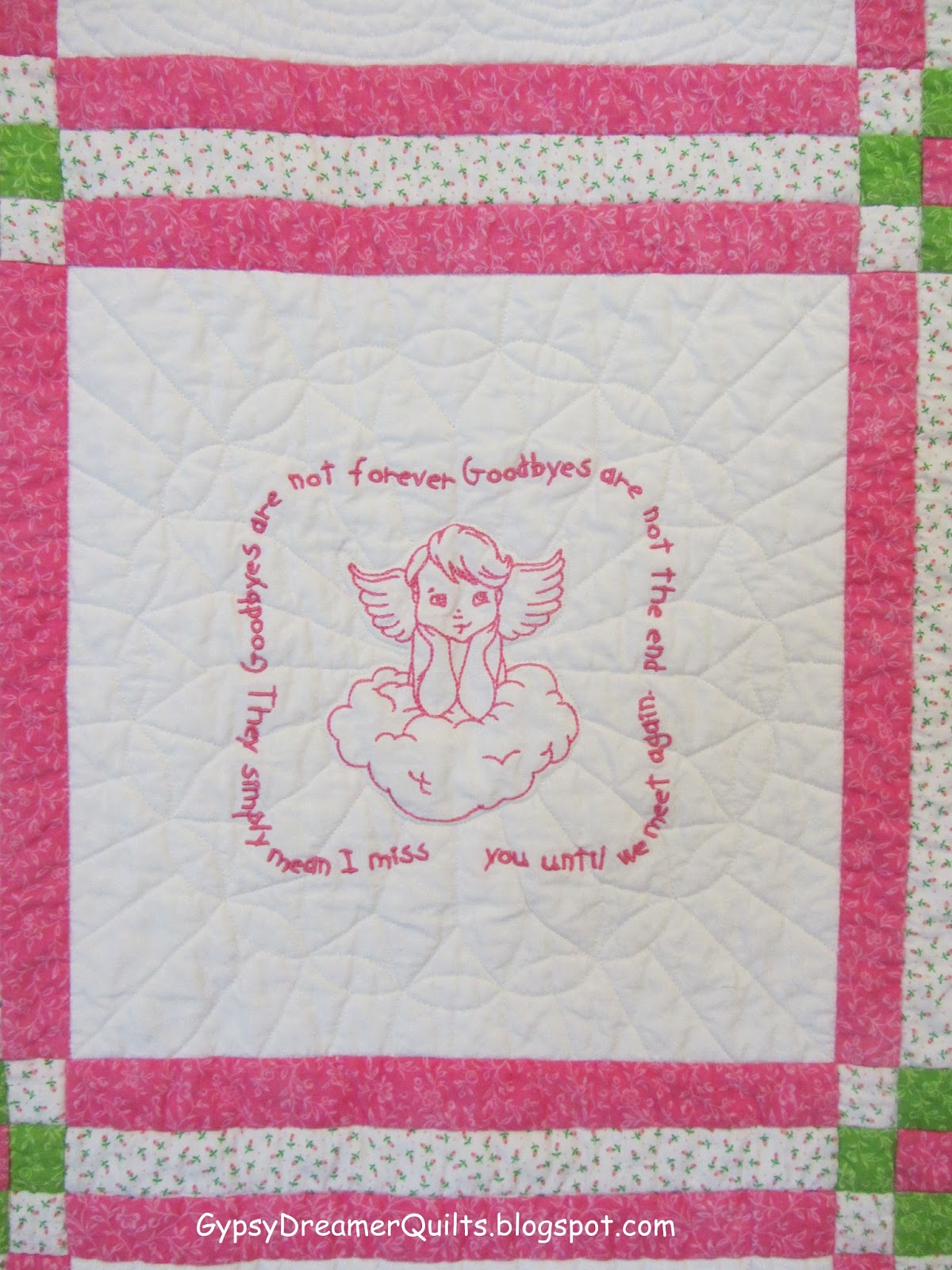 I printed several pictures Betsy had emailed me onto EQ Printables Premium Cotton Lawn inkjet fabric sheets. They worked beautifully and feel so natural! Not stiff like some of the printable fabrics I've tried in the past. I was able to quilt around the figures on the photos with a monofilament thread on top to give shape to them and to quilt the 8" photos. 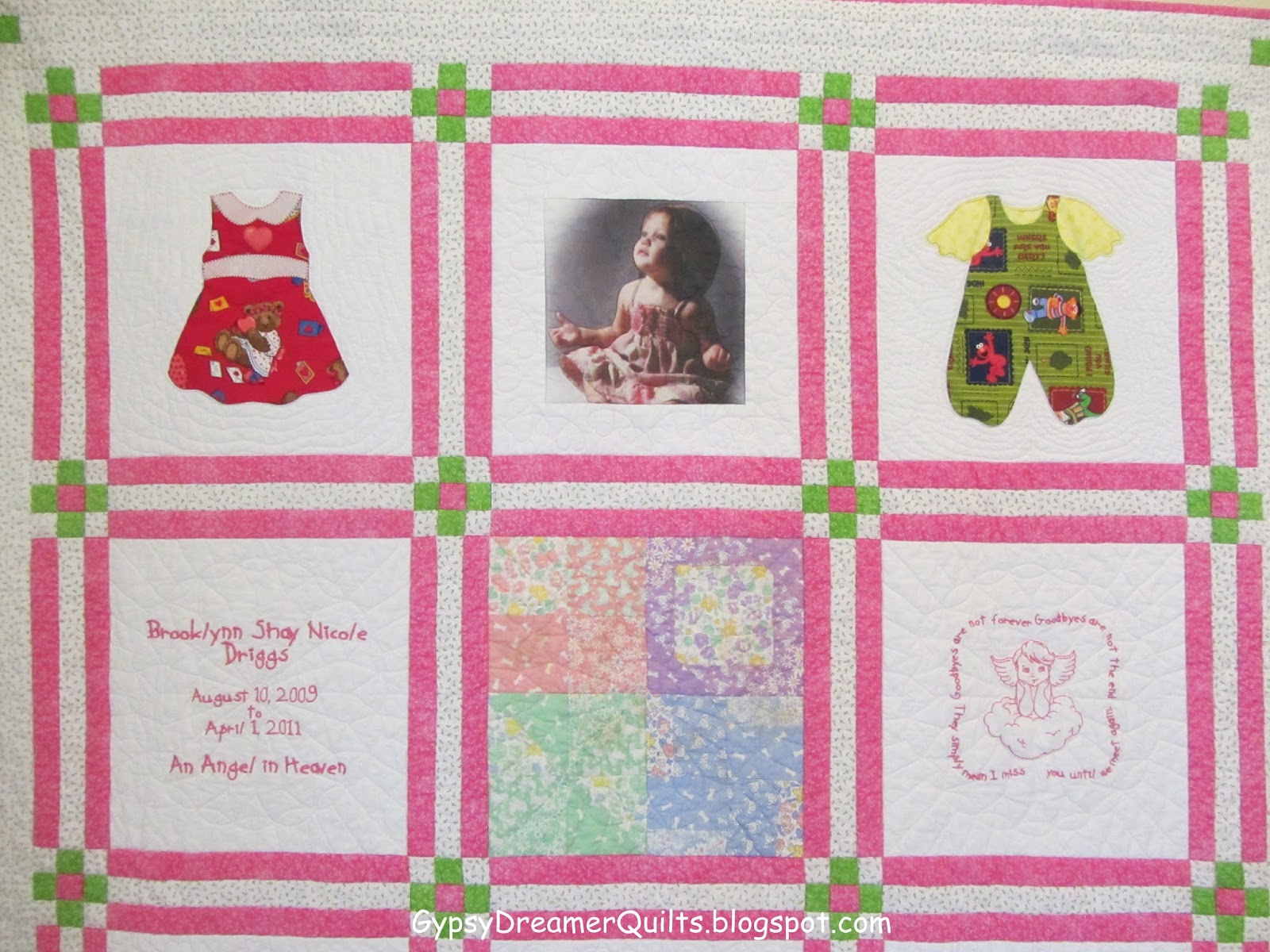 I was able to incorporate bits and pieces of seven of the original fabrics shipped to me, plus four of the pieced blocks that I sewed together 4-patch style and trimmed down to my 12" finished size. 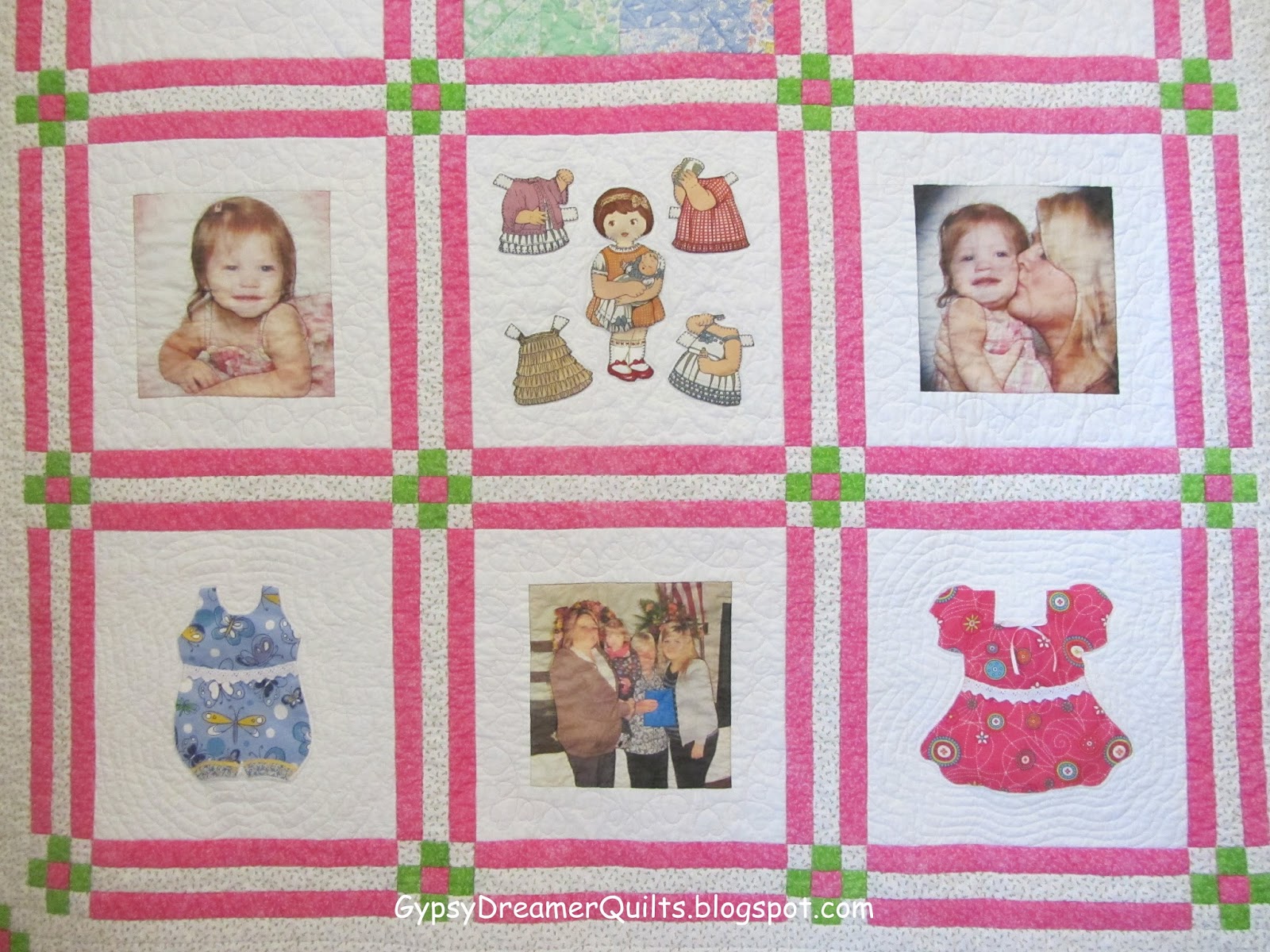 The box of fabrics also included quite a few pieces of flannel, which I am using to make a pieced back. Once again, the mold stains were throughout and hard to miss, but with a very pale pink flannel with rosebuds as the background fabric, I'm using the others to make and add pinwheels for a fun pieced back. 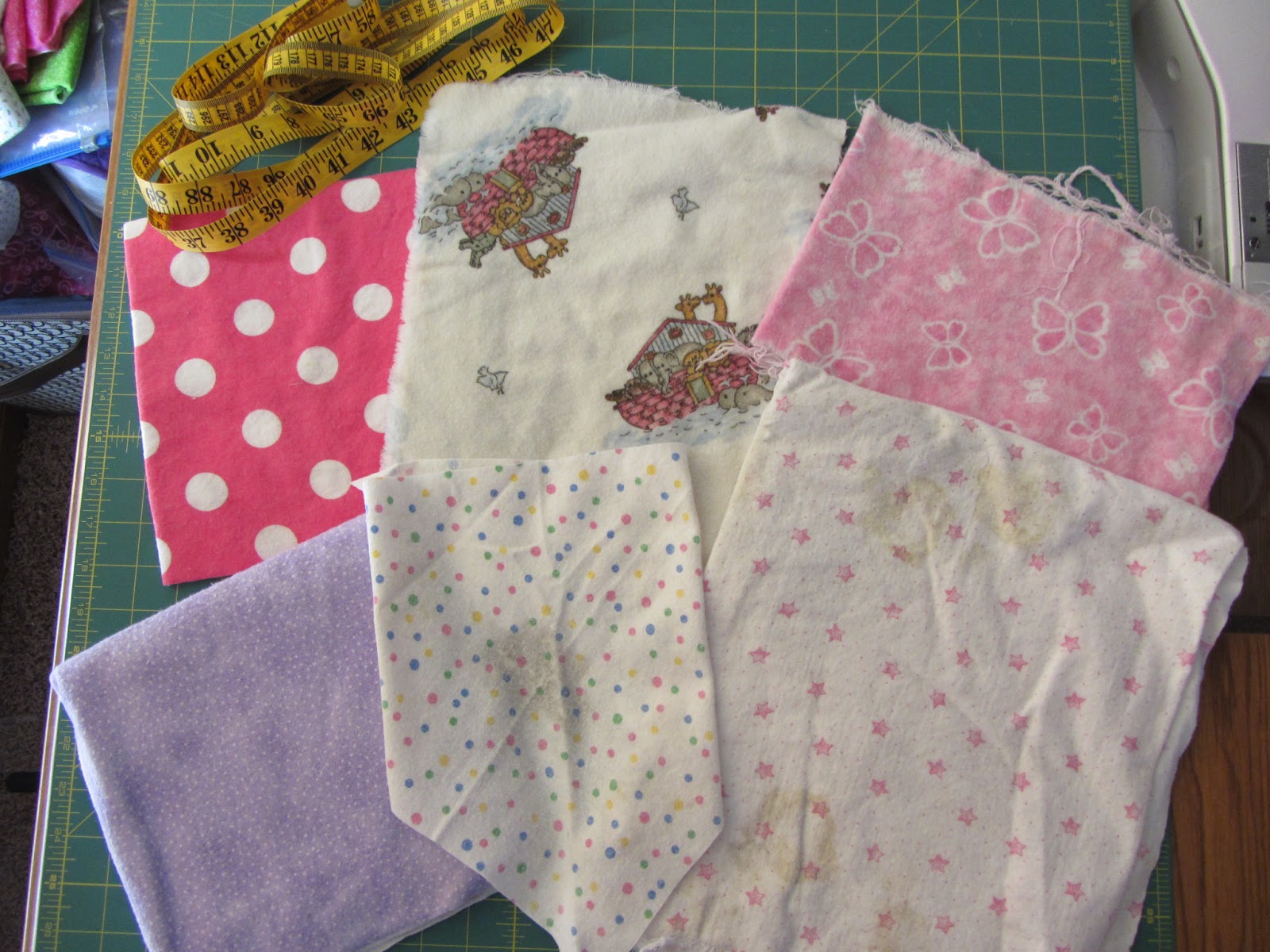 The pieced back came out cute and I was even able to incorporate some of the Noah's Ark fabric that was only a 9" strip into the smaller blocks. 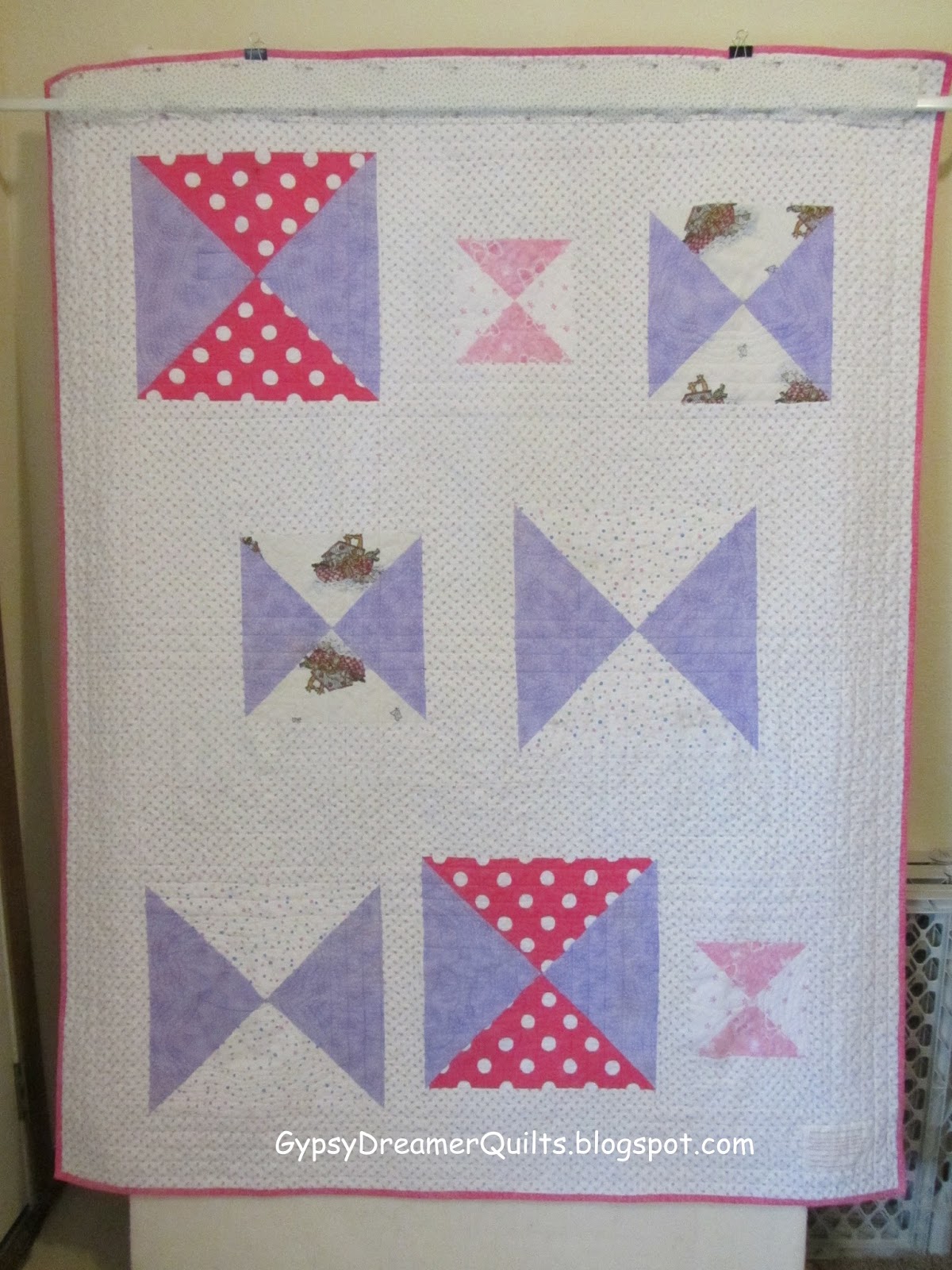 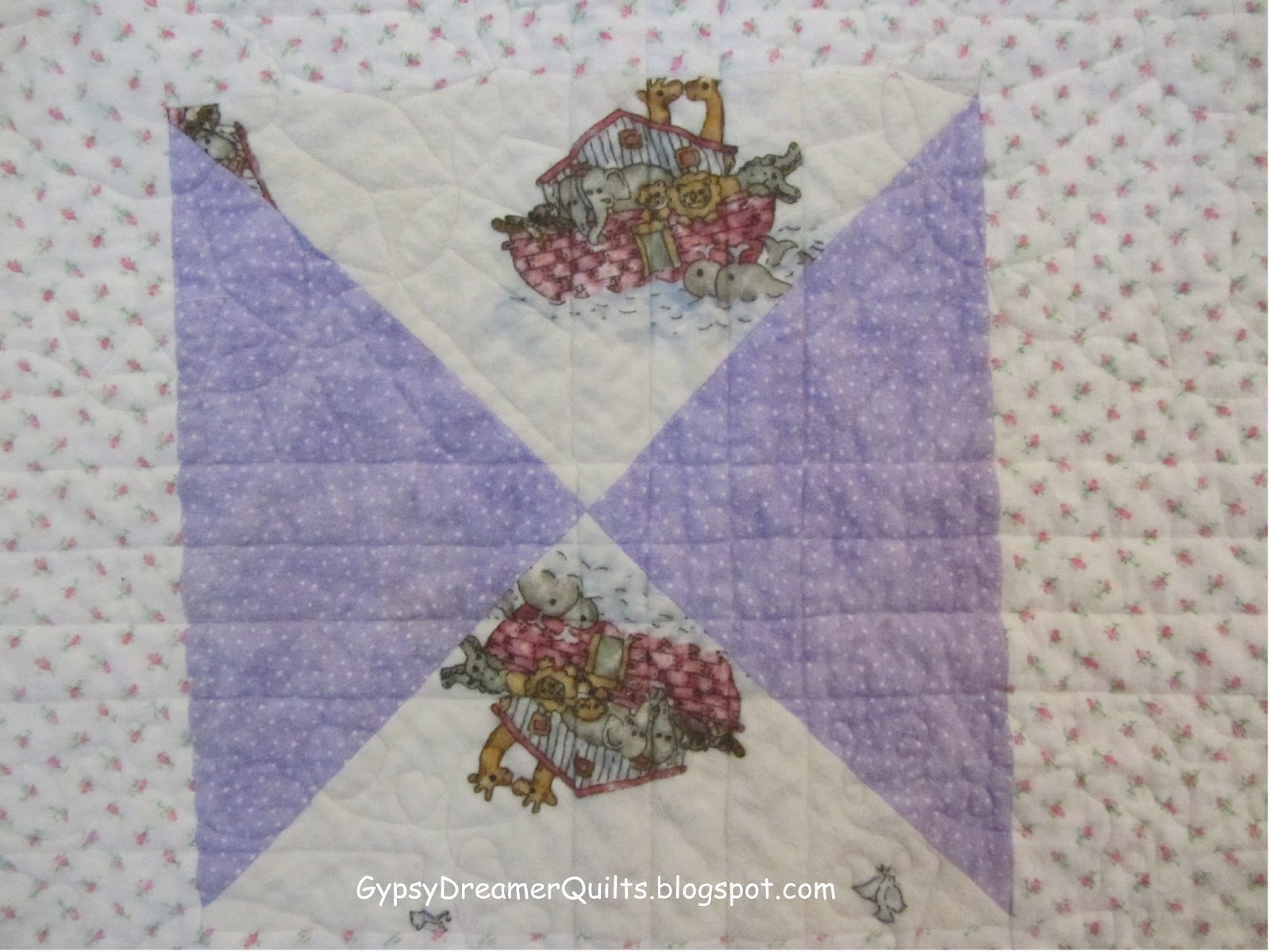 So, did I meet my deadline? YES! I was able to finish it completely and had it in the mail by August 5, just a couple of days later than I had planned. The target presentation date is August 10, which would have been little Brooklynn's 4th birthday. Here's a picture of me peeking over the top while holding the completed quilt up at the retreat where I finished the binding up on the weekend. 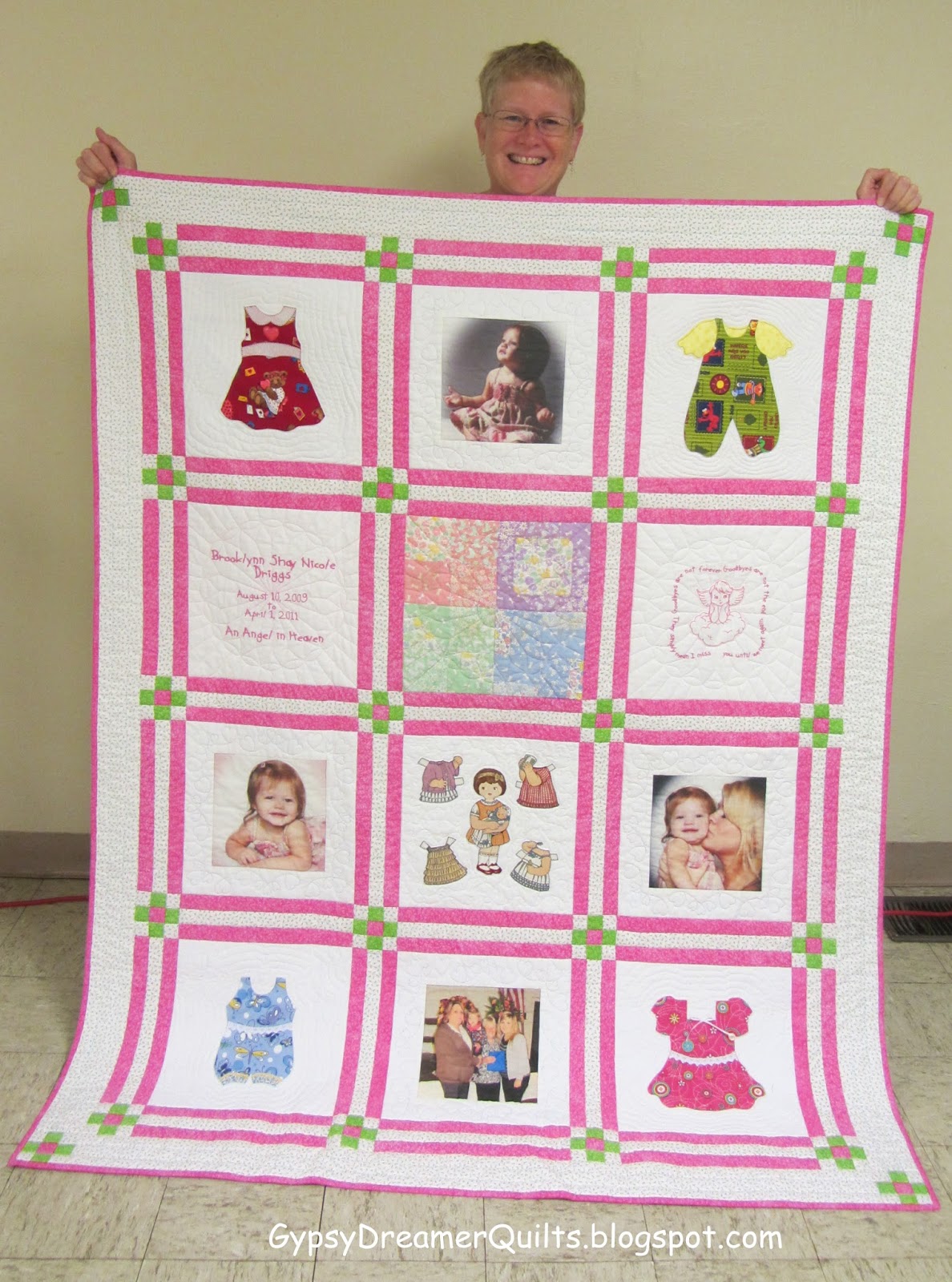 I can't imagine the hurt Shelby and other young mothers who have lost little ones must feel. I keep her in my prayers always and hope this quilt will bring her comfort.