Mission Accomplished! Autumnal Equinox, the 2015 opportunity quilt for my guild, is DONE!!!

Ever since I showed the Maple Leaf Quilt Guild in Baldwin City, Kansas, my Solstice Moonrise quilt top (made from Bonnie Hunter's Celtic Solstice 2013 mystery quilt pattern) early in 2014, they were in love with it! In fact, so much so that they voted me to be in charge of making the 2015 opportunity quilt in that pattern. Typically this is a group project done by several members of the guild; however, with so many subunits needing to fit together to make the larger blocks, I chose to move forward doing all of the sewing myself.

To help streamline the process, I increased the size of the blocks from 9" to 12" and substituted the pinwheels with fall leaves fabrics to simplify it a little. By making the blocks bigger, I could grow it to queen size without having to increase the number of blocks needed. Members of the guild donated fabrics in the fall leaves color palette so I could get started. Some were scraps, since Bonnie Hunter's quilts are typically quite scrappy, while others donated fat quarter bundles that could be used. I started in sitting in front of my TV watching hours of movies, reruns, and 2014 March Madness college hoops while making 4-patches, tri-recs, chevrons, and flying goose units so I could begin assembling blocks.
Before long, I had enough units together that I could put together a few blocks to get an idea how the colors would play together and what the overall look might be.

As I got further along and had completed all of the chevrons, I soon discovered that one of the pieces of yardage that had been donated truly didn't play well at all (notice the green with pink flowers in the units above). Unfortunately, there had been a lot of that fabric! I made the decision to remove that particular fabric from the quilt completely, so the unsewing began. I took those units with me to the Wednesday morning gathering of quilters at our local shop and several guild members helped me rip them apart and remove the corner pieces to be reused on different greens. I dug through the donations as well as the fat quarters in my own stash for more suitable greens that had more of the fall colors in them and remade nearly a third of the total number of chevrons. In the end, it was totally worth it!
With blocks coming along nicely, it was getting close to time to layout the whole quilt to get ready to sew rows together. The overall appearance was quite pleasing once the greens had been swapped out. 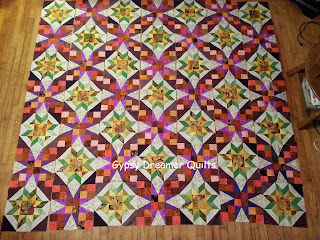 The guild wanted a queen size quilt that was not square, but rather a little longer for nicer bed coverage. Since the original Celtic Solstice pattern is for a square quilt, rather than add another row of blocks, I chose to add a row of chevrons to two ends, bordering each with a narrow strip of color that would bring it all together. The green seemed to be a great choice and one that I had enough fabric for in the donated stash. 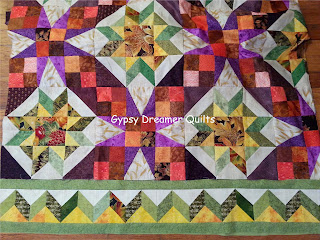 Finally the quilt top was ready for the outer borders. I took the top with me to the shop and several of us from the guild began auditioning various possibilities for outer borders. After our stack of 6-7 fabrics didn't bring a consensus, one of the gals (and a guild member) working at the shop went to the shelves where we had been looking, pulled one out that we hadn't even considered, and said, "Hey, try this one!" Amazingly, it was the perfect solution that everyone loved! 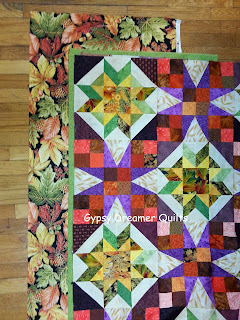 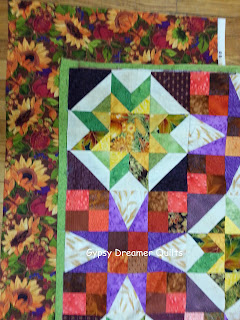 Initially the fall leaves (pictured on the left) was my favorite, but somehow it seemed washed out. When Cathy suggested the sunflowers and fruits, everything popped! So, fabric was purchased by the guild to do the borders, a wide backing in brown was selected, and off I went to add the borders and get ready to pin the sandwich for quilting. 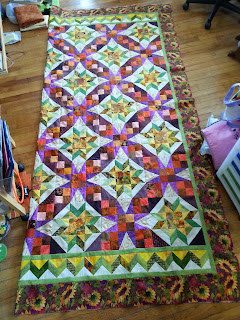 Typically I pin my quilts on three 6 foot banquet tables in my living room. As you can see, the tables just weren't big enough. If the top had fit one way, I could have done it, but with it hanging off of both the side and the end, it just wasn't working out. Back to the drawing board... 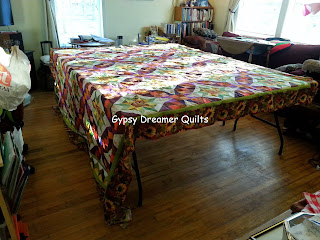 It was time to clear away everything I could to make room, so furniture got pushed back or moved into the hallway and the largest space I could manage was cleared to tape down the backing, float the batting and top, and pin on my living room floor! Thankfully it fit, but just barely.
Finally it was time to start thinking about quilting. Wow! What a responsibility, custom quilting my guild's opportunity quilt! I could easily have passed it along to be long-armed with a pantograph design, but I really wanted to amazing piecing to be showcased, so took on the quilting job as well. I had been researching custom quilting designs for other Celtic Solstice quilts over the last year as I was planning how to quilt my own (which is still waiting to be quilted). I had gathered several really cool ideas and so dove in! I did extensive stitch-in-the-ditch work, stabilizing all blocks and nearly every seam within each block before I could start on the fun stuff. 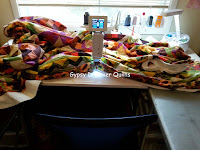 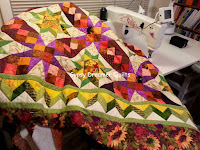 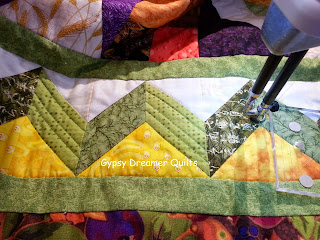 I continued with the straight lines in the chevrons of each block, adding narrow waffles in the connecting green triangles, making it easy to move around each block without having to break thread as I finished quilting with the green. 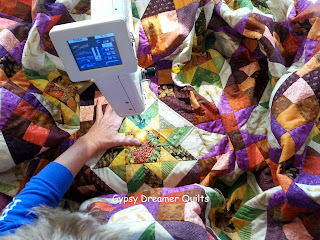 Next I started adding gentle curves in an orange-peel type design in the yellow star and center square in each block. 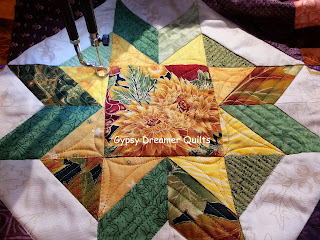 Orange-peels were then done in all of the orange and brown four-patches that crisscrossed the quilt. The last major element was to quilt the tone-on-tone curved diamond secondary shapes created when putting the blocks together. 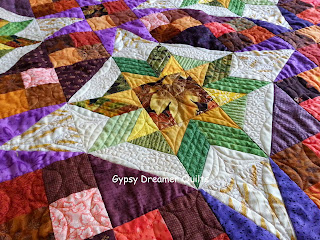 As I was quilting the main body, I was scouting for a stencil I liked to use in the outer borders. I found a beautiful stencil called "meandering feather" that I bought. It fit perfectly in the outer sunflower border and so I started pouncing two or three lengths at a time, working my way around the quilt. There was only about an inch discrepancy between the repeats of the stencil and the overall length of the border, so I didn't have to do much stretching or adjusting as I got close to the corners. 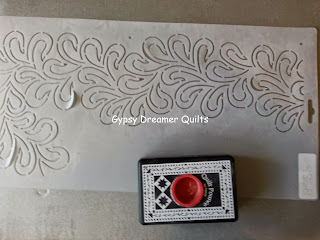 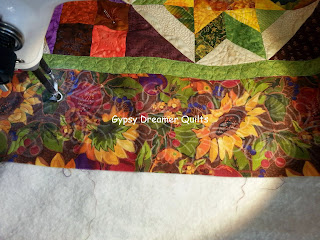 With the quilting complete, it was time to square up the quilt and trim the borders to ready it for binding. My, oh my, it certainly is a process making a quilt from beginning to end! Being particular about how I pieced the blocks and building the top, thankfully it came out pretty darned square without having to make any adjustments during trimming! 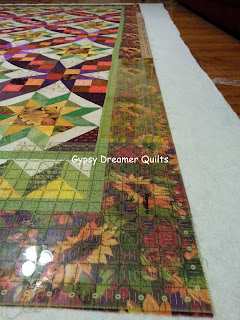 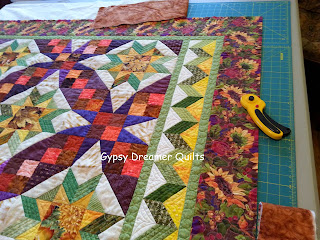 Not done yet, though... Next the binding had to be prepared, sewn on, and hand stitched down. 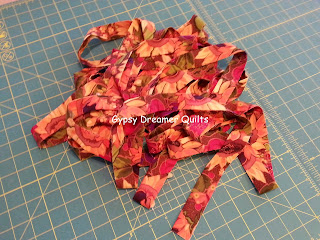 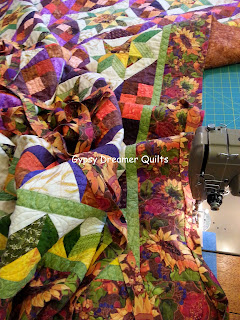 If you're paying attention to the pix, you'll see that some of the tone-on-tone stippling designs aren't yet done as I'm sewing the binding on. With all of the stitch-in-the-ditch work done to stabilize the quilt, I went back and forth between doing that (sometimes tedious) detail stitching and the (more relaxing) binding work. This quilt was pieced and quilted entirely with Aurifil #50, my favorite thread! I used brown in the bobbin behind all of the various colors, but needed to use a matching bobbin with the neutral thread used in the tone-on-tone stipple work. The custom work was completed last week, just days before the first Art Walk of the season where guild members plan to sell tickets each month this summer. Once all of the quilting was done, I took a picture of the back where the details could better be seen. 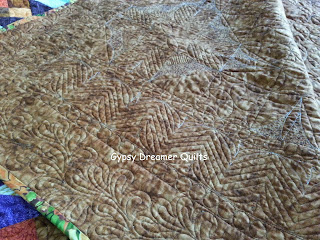 So close!!! After spending several afternoons and one very late night hand stitching, Autumnal Equinox was finally done. A hanging sleeve was sewn on with a basting stitch in the ditch from the front and hand stitched down at the bottom on the back (this is in case whoever wins it doesn't want a hanging sleeve, it can be easily removed), and a label was prepared and hand stitched after being fused to the back.
Today while family was visiting, I had my grandson and his grampa hold it up high for me so I could get a complete picture of it.

Then later after the family went home, I put it on my bed (which is only a double/full, so there is a fair amount of drop on the sides) to see what it would look like when put to use. If I do say so myself, it came out fabulous! 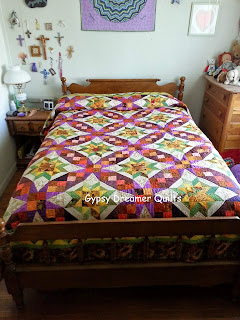 I'm so happy with how this year-long project turned out! The guild is delighted and I've had many wonderful comments on it as I've posted its progress in various Facebook quilting groups. I look forward to entering it in the Douglas and Lyon County Fairs and the Kansas State Fair later this summer. Some lucky person will win this quilt when we draw the winning ticket at the 2015 Maple Leaf Quilt Show held during Baldwin City's Maple Leaf Festival the third full weekend in October. We, the Maple Leaf Quilt Guild, wish all those who purchase tickets luck!

More snippets from the sewing room soon,
Liz
Posted by Elizabeth at 11:46 PM No comments: