I've have spent the last couple of weeks rewriting and updating my Hexified Panel Quilts pattern. As a result, I find there are loads more tips and tricks that could be helpful to those making Hexified Panel Quilts or One Block Wonders. Having made over 30 Hexified Panel Quilts and/or One Block Wonders, it seems appropriate to share some of tips that are helpful to know when going through the process of making these one-of-a-kind quilts. From layering and cutting your strips, to cutting the triangles, to assembling them into the units ready for design, there are numerous steps that can make or break your success, as well as test your patience. This series of tutorials is meant to help you through some of those steps and make the process easier and smoother.


It has been nearly ten years since I made Strutting Peacocks, my first One Block Wonder. Oh my, how much I've learned since those early days! 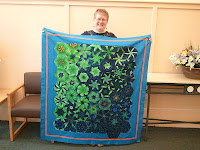 The first thing I've learned is imperative to making a successful OBW or Hexified Panel Quilt is to be sure all of your panels were cut from the same bolt. Several times at workshops I've had students come in with panels they purchased on the internet, 3 panels from one vendor and 4 from another. Invariably, the panels from two different bolts do NOT match up properly and can cause a number of problems. Not realizing I would have a perfect example just hours before writing this, I had planned to just explain why it makes a different. 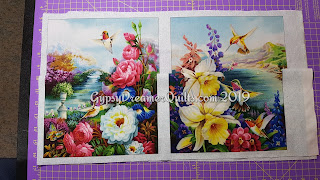 However, as I was cutting panels for a sample last night, I only had four on the end of one bolt and went to the closet for a fresh bolt to cut three more. Since I had ordered from the same company on the same day, I presumed they would work together just fine. However, they were obviously quite different! If you look at these two panels--one folded and placed on top of the other, the selvedges on the right are quite different, and the blocks themselves don't match up. Also, the colors on each are enough different that it would be obvious if I combined three from each in a single hexie. The first bolt was quite vibrant, while the second bolt was a little more washed out. Once I discovered just how different they were, I cut 3 more from the new bolt and set the four orphans aside for another project. Just like checking that all skeins of yarn for a project are from the same dye-lot, purchasing panels from the same bolt holds true for similar reasons.

For those using full width of fabric panels, rather than wrangle 44" long strips and try to keep them aligned, I cut the panels in half at the fold before I start. Our most common rulers are only 24" long and our cutting mats typically no longer than 36", so trying to cut a 44" long strip is awkward at best! Working with two stacks about the size of fat quarters makes it much easier to handle, and the 22" WOF strips are easier to keep aligned as well. There has been much discussion about the loss of extra hexies when doing this; however, you will only lose one hexie per strip, which isn't much in the big picture. A 24x44" panel cut at 2 3/4" can yield ~12 sets of triangles per 22"/half-WOF strip. Multiply 12 sets x 8 strips across the 24" panel and for just half of your panel you get 96. Double that for both halves of your full WOF panel and you get 192 sets of triangles! Losing 8 sets by cutting the panel in half is minimal waste and makes the process so much more manageable!

When pinning, I prefer to add my pins oriented long-ways along the long edge of the panels, using only flathead pins. The flathead pins make it easier to place your ruler down on top of them, without causing the ruler to rock as it might when placed on top of pins with round heads. I typically cut my strips width of fabric as there is just a hair of ease when stretched, whereas there is no ease along the length of grain. I've found that little bit of ease is very useful when assembling your units into rows as bias edges of some triangles meet straight edges on other triangles in the assembly process. 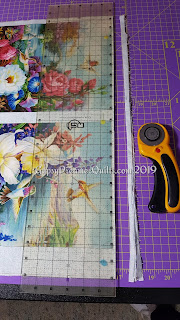 Overall, I've had good luck using minimal pins--sometimes only 2 or 3 along one edge--when lining up my panels; however, these blocks, once all layers were cut from the same bolt, still gave me fits. I lightly sprayed every panel with water and pressed them to get the creases out that they had developed while rolled on the bolt. Even then, two layers in particular were stretched more than the others and resisted laying flat and staying aligned. I ended up using multiple pins across the fabric and down both edges and, spraying the stack lightly from the wrong side (pins down on the board), I re-pressed the stack as a whole while pinned to get them to behave. With a little extra encouragement (and patience!) I was able to get them lined up, removed most of the pins, and trimmed one long edge back to where all six layers were all even. I chose a spot ~1/4" from the edge of the block frame so the frame background would be hidden in the seams. 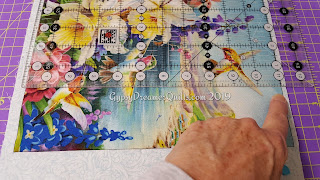 I then measured from that cut edge, across the narrow width of the panels, to find out how many usable inches I had to work with to cut strips. I don't trim the opposite edge of the panels as any extra may be needed to assure all strips can be cut without the last one being short. I chose 11 1/4" as my usable amount and began dividing by various possible strip widths until I found a measurement that would give me the most number of strips with the least amount of waste. In this case I could get 5 strips cut at 2.25" and the little bit left untrimmed on the left side would be enough to assure I got all five strips at their full width.

NOTE: When cutting fabric, there will always be bits of fibers left over, similar to the sawdust left behind when cutting lumber. Even if you cut each strip accurately, the placement of your ruler and any twist, as well as the width of the blade, can cause a fifth strip to possibly come out short. For example, if I have exactly 8" of usable fabric with no remnant and want to cut four 2" strips, I will choose to cut 1 7/8" or slightly less per strip to give myself a little leeway. Leaving the extra on the untrimmed opposite edge, gives me a little space for minor errors without shorting the final strip.

To begin cutting and being right handed, I turn my stack of six layers around so I can use my ruler to accurately measure my 2 1/4", using a piece of rubber shelf liner under the ruler to help prevent shifting. I proceed across the stack, cutting rows until I'm at the far edge where the small amount of leftover will be trimmed away. The first strip was trimmed and set aside before the rest of the strips were cut, so the second picture shows only four of the strips and the leftover waste. 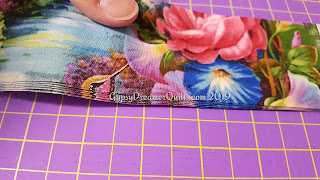 As each row is cut, I double check to be sure the print is still aligned nicely across the strip on all six layers. As long as they are very close, I don't worry about small anomalies as they won't be noticeable once the triangles are cut and assembled. Remember, these are triangles, so the print won't be matching up on triangle edges as they might on square piecing. 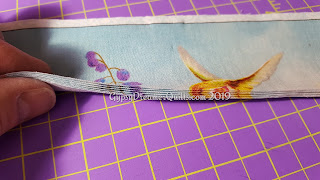 At this point you're ready to cut your triangles, which moves us on to tutorial Tips 102 for Hexified Panels/One Block Wonders.

More snippets from the sewing room soon,
Liz
Posted by Elizabeth at 5:17 PM