I've been asked several times if my Hexified Panel Quilts kits for wall-hanging size projects are available for purchase. Initially the answer was no--they have only been available at my trunk shows or classes & workshops. However, during the long year+ of staying safe at home, the kits were each photographed and loaded onto my Gypsy Dreamer Quilts Etsy shop. Now you can purchase my Hexified Panel Quilts pattern (in paper to ship or digital to download), my GDQ-60R triangle ruler, and/or any kit from my collection and have it shipped to you anywhere in the US. At one point there were 30 different fabric panels that had been cut up into 50+ kits to pick from. Some have sold since they were first listed and I have many more waiting to be cut that will be added as time allows. Read on to learn more about how we cut the kits and the possibilities they present! 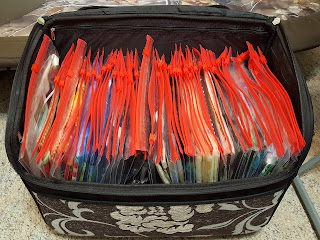 For the last several years as my travels have taken me to shops across major parts of the country, I've been purchasing sets of 7 fabric panels with multiple blocks that I thought would make good smaller projects to use in workshops and for attendees at my trunk shows to purchase to try the technique without having to invest in 7 full size panels that can be an expensive trial. These multi-block panels are cut into kits that are typically one block wide by half width of fabric, with a few variations depending on the panel layout. The panels have blocks that range from ~8x8" up to 22x24" that make up into a variety of wall hanging size projects. For those who may visit my shop and not really understand what I'm offering, I thought I'd give a little more explanation here and offer some samples even though not all of these samples are still available. The Santa sample was made early on as I was experimenting with blocks to make smaller projects and those kits have long been gone. That's why I continue to look for block panels from new lines to replenish my kit bag. 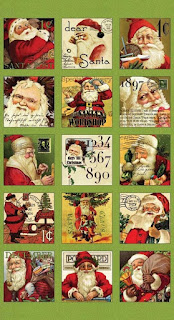 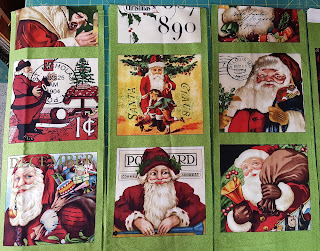 This Father Christmas fabric from Quilting Treasures featured a variety of Santas had three rows of five ~8x8" blocks across the width of fabric. I chose to cut the fabric at the fold, making each kit 22" by ~8" wide containing 2 1/2 blocks to cut and make into hexies. Unfortunately when I purchased these panels, I got the end of the bolt and the 7th set only contained two rows of blocks. Since all of the blocks were from the same piece of fabric and played well together, I cut the remaining ten blocks apart and placed one single block to frame in each of the six kits, so the blocks to be framed didn't necessarily match up with the ones in the six layers, but still coordinated well. 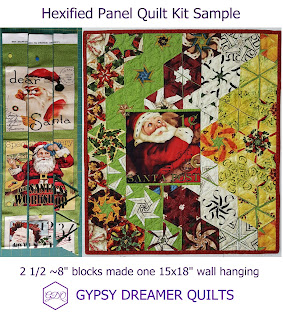 For the Father Christmas sample, the set of six layers of 2 1/2 blocks were cut into three strips at 2 1/5" wide, making enough hexies to design around the single block to make a 17.5x20" mini with five leftover orphan hexies. It's rare that every hexie gets used in a quilt design. In most cases there are orphan halves left over from filling in the notches in the layout along the sides of the panel or outside edges, hexies that just didn't play well, or an odd number left over that won't make a complete row.
In the case of the Splendid Swans panel by Quilting Treasures, I chose to focus on the larger blocks and again cut the fabric in half at the fold, leaving 1 large block and 1/2 small/center block per half width of fabric and resulting in four kits. 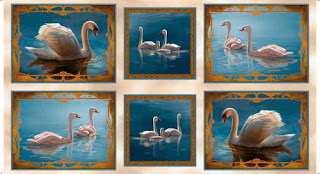 I used one of these kits to make a sample in tandem with my students at a two-day workshop last year, using the gold frame from the partial block pieced into a border across the top of the full block for added interest. You can see the dark hexies along the right side are from the partial block, as well as those with the light frame between the blocks. 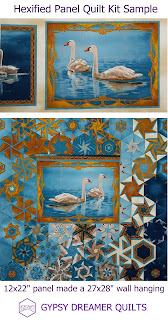 In some cases, panels have six blocks which are all interesting. In this case I cut the panel into sets of two blocks along the grain line instead of across the width of fabric. The Winter Joy panel by Studio E Fabrics is such a case, creating three distinct kits--two kits with the snowflake border and the center two blocks without the border. 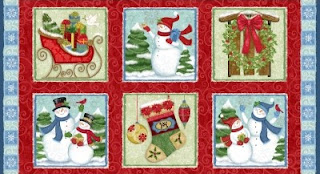 When making a sample using a bordered set of blocks, the colors naturally gravitated to their own block, with the border matching the snowmen and making that top a bit larger. 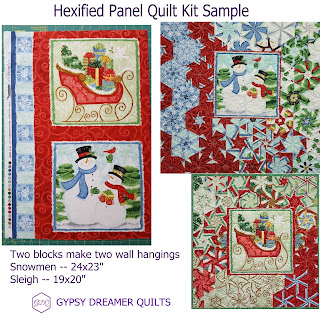 The Mustang Sunset panel by QT Fabrics had eight blocks, so the fabric was cut at the fold and then divided into four kits of two blocks each cut across the width of fabric. Since the border was printed between each set of blocks across the fabric, all of the kits had the border to play with. 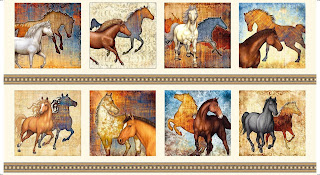 In my sample, I trimmed the borders off the six layers before cutting my strips. The two blocks by half width of fabric were cut into 2 3/4" strips to make the hexies. By reserving the border, I was able to use it across the top and bottom of the finished hexie layout before adding a final border to frame the entire piece. I chose to use as many of the hexies as I could from both blocks laid out around a single block (the second block went into my orphan block collection), using a gold Northcott Stonehenge that blended so well with this panel for the inner frame and outer border. 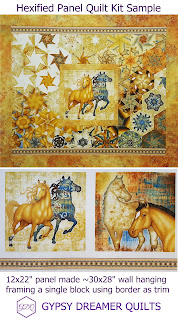 When making a layout around a block or panel, having the hexies above and below match up with the side sections can be tricky. In this case, I needed to add a small frame around the center block to make it fit the opening in my layout. I had the choice of adding another round of hexies and trimming the block to fit a smaller opening or adding a border/frame to the block to "grow it" to fit the opening. Notice that the borders on the sides are narrower than those above and below the block. I typically don't trim a panel until after my layout is complete and the sections are sewn together and ready to attach to the panel whether a block or a full size panel. In this way I can decide to trim or border the panel to fit the space at the end of the layout process.
My final example is this fun Farmers Market panel by Studio E Fabrics featuring roosters and a floral border. I've had this panel cut into kits more than once. The first time we cut them, two kits were cut along the grain as two blocks each with the floral border, and two kits of individual blocks measuring ~12x12". I took one of the single block kits and decided to play. 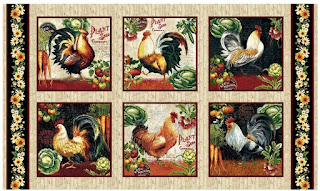 I noticed as I started, being just a 12x12" block, there weren't as many hexies as I was used to designing with. It seemed the layout in a typical square or rectangular design just wasn't going to work. So, I started thinking outside the box and came up with a cascade of hexies falling into an irregular bottom edge, and added a burgundy border to the top and two sides that framed the light blocks nicely. 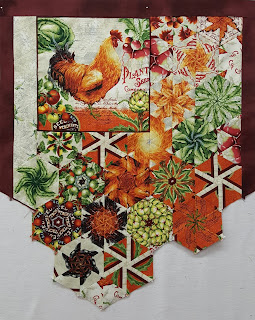 I finished it by stitching the three layers, with top & backing right sides together, around all the irregular points, left an opening, and "birthed" the quilt, flipping it right-side out, for a fun finish without having to bind all those points. This is a fun example of "not all quilts have to be square"! 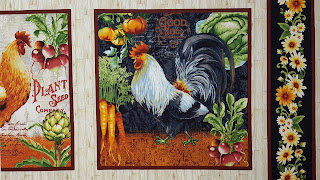 I've found working with these smaller projects to be great fun! After the pandemic, I have adapted several of my trunk shows into Zoom/PowerPoint presentations with live narration. It turns out I have over 60 wall-hanging size quilts, so I've created both Think Small for the Wall--Eclectic and Think Small for the Wall--Hexified, plus still have Adventures with 60 Degree Triangle Quilts that covers my journey through One Block Wonders, Stack & Whacks, and my evolution with Hexified Panel Quilts.
More snippets from the sewing room soon,
Liz
Posted by Elizabeth at 3:16 PM