Quilt Goes to Market Without Me

I've been honored to be asked to make several of my hexified panel quilt One Block Wonder variations for Timeless Treasures Fabrics over the last several months. The first two, In The Garden and Tuscan Poppies, were each featured in January and February of this year on their blog, my blog, and across social media to promote the Reverie and Tuscan Poppies fabric lines designed by Chong-a Hwang. After those were complete and shared, I was asked to make a third sample to be featured at the 2018 International Quilt Market in Portland, Oregon. Despite the fact that life got complicated in the midst of this project, my husband Leslie and I managed to still make the deadline and, indeed, Dancing in the Moonlight is now hanging in Portland! 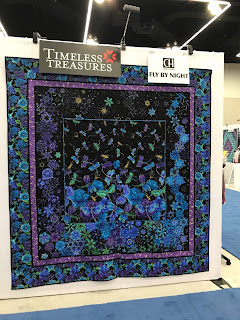 The request for the third sample came in early February from their new marketing director, Hayden Lees. The skew sheet for Chong-a Hwang's Fly By Night was emailed to me as the fabric I would be using for the next quilt, but told it wouldn't be in from the manufacturer until at least mid-March. We sent Hayden our yardage request, enough to make the quilt including borders and backing, and waited. The deadline was to have it shipped hopefully by May 1 to be photographed before going to market in mid-May; however, there was a little flex there if needed. We finally received our shipment around March 22 and were ready to get started. 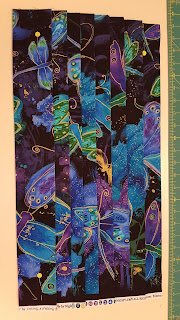 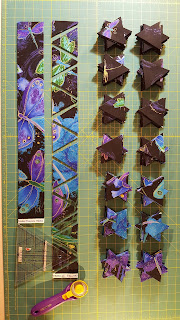 Unlike other hexified panel quilts we had made, this one was requested to finish about 80"x80", much larger than we were used to, not to mention square! Les and I put our thinking caps on and went to work. We cut the strips at 2 3/4", which has become our favorite size to get a large number of hexies to work with, as well as to concentrate the color within the units for better designing. We worked together to sew all of the units into two halves, all chain pieced in sets of 12. Once the sewing was done, I spent an evening pressing all of the seams open and pinning the halves together so we could go to the design wall and get started on the layout. 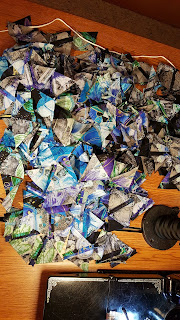 Because of the overall quilt size we needed to end up with, we used a double repeat of the yardage for the center. Using a nearly square center, it would be easier to build the hexies around and come out with a square quilt when we were done. 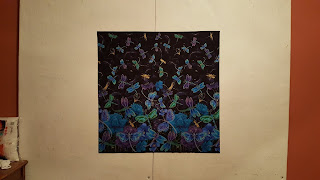 Luckily we have two 4'x8' sheets of insulation board covered with batting that are mounted on the wall to be used for designing. 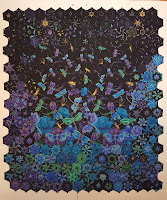 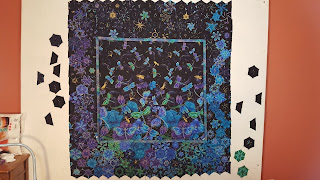 The layout evolved over several days into what felt like two trellises climbing up the sides of the central panel, with the gold dragonfly hexies scattered across the top as though dancing across the midnight sky of hexies. 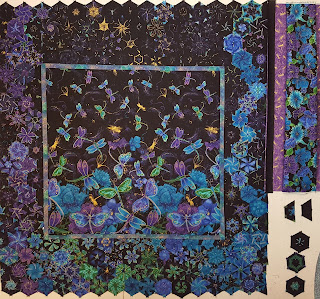 Even before the layout was complete, we pinned the accompanying fabrics up that would be used for borders to get a feel for where we would be going to reach the final size. The design wall luckily is large enough that we were able to accommodate the entire layout including experimenting with borders along one side. 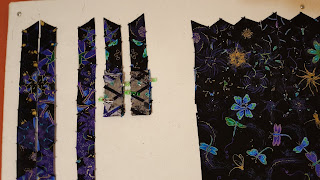 As we neared the finish of the design process and started sewing the strips together for final assembly in early April, my husband managed to tweak his back and ruptured a disk. Our focus shifted overnight to running to doctor appointments and physical therapy. I continued to work, but lost my drive as I worried about my husband. I was finally ready to pin the layers just before May 1. Suddenly I was so grateful for the flex to ship it directly to Hayden in Portland just before Market and have him take photographs later. 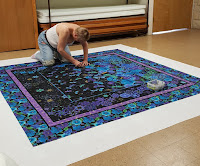 The quilting process started about the same time Les learned he would soon be having surgery. I worked long hours to get it done as quickly as possible so I would be free mentally to be there for Les when he went in for major back surgery. In reality, I didn't finish quilting until after he returned home from his 5-day stay in the hospital. While he slept, I quilted, knowing the deadline to ship was fast approaching. 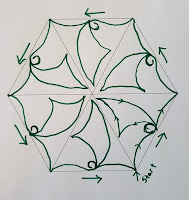 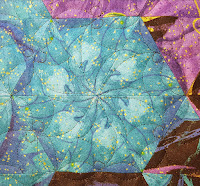 I worked with a new design that hopefully would better fill each triangle of the hexies, thereby balancing the overall quilting with whatever I would put in the central panel. The experiment worked for the most part; although, I still had some serious waves when I laid the finished quilt on the floor to check it. The pebbles and outlining of the individual dragonflies in gold were still too much to balance and create a flat, square quilt without blocking. 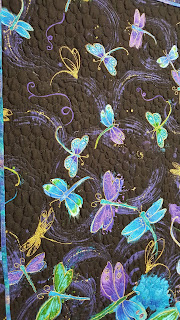 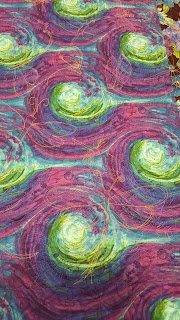 As a final process, I stitched an overlock stitch on my sewing machine all the way around, put the quilt in the washer for a rinse and spin, and pinned the damp quilt to the design wall. With Les's help holding the T-square, I used blue painters tape to outline the quilt on three sides. Lots of pins later, we let it dry overnight and then I spent the day binding, looking at the clock every 30 minutes and wondering if I would make the deadline. 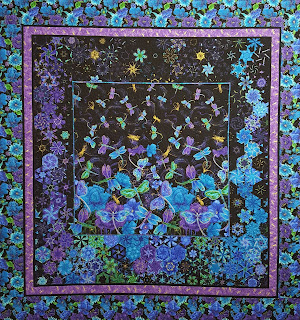 Before sending Dancing in the Moonlight off to Portland, I took one more picture of the completed quilt for my records, boxed it up, and headed to the FedEx office in Lawrence. It, indeed, arrived as requested in time to hang before Market started. Whew! I truly didn't know what to expect when we dove into this project, but am completely satisfied that, together, we did something amazing once again. The unexpected life event that threw us off has been resolved. Les is now recuperating from his back surgery and is back to his sewing machine a little each day. We are taking a short breather before diving into our next project. Many thanks to Timeless Treasures for trusting us to come up with a sample worthy of hanging at Quilt Market this year!

More snippets from the sewing room soon...
Liz
Posted by Elizabeth at 6:27 PM