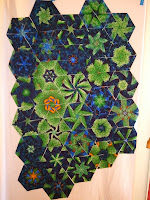 This quilt was started when I was still taking care of my dad in California. We're fast coming up on two years since his passing and my return to my life in Kansas. Finally, Strutting Peacocks is complete!

In February 2011, a friend back in Kansas posted a picture on Facebook of the beginnings of a One Block Wonder in beautiful understated tones of creams and browns. I had purchased the same book and some beautiful fabric with peacocks in full tail spread and walking with tails behind that I thought would be beautiful in this kaleidoscopic design. [My one regret is that I didn't take a picture of that fabric before cutting into it. Today I'd know better!] With Laura's project as inspiration, I started cutting out and assembling the 60 degree triangles that would become my blocks in blues and greens. A month later I had put together all the blocks and took about 30 pictures of possible layouts, playing with color placement and flow. Every time I moved one or two blocks, I snapped a digital pic so I could go backwards if I decided I liked a previous layout better. 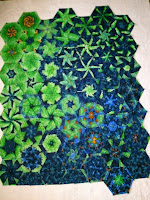 Once I decided on a layout I liked, I started sewing rows together, matching up the block halves on adjoining rows. When it was all assembled, I added the borders and fell in love with the little 1/2" orange pop border that brought out the bits of orange from the peacocks' feet in the print. In May 2011 I took the finished top to work to share and had my picture snapped with it. Then it got folded up and added to the UFO pile. 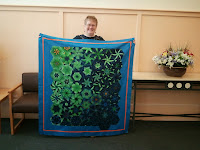 Jump forward two years after my move back to Kansas when this top came down off the shelf and finally got sandwiched and pinned! Progress! I had recently purchased a HandiQuilter Sweet 16 mid-arm and was ready to start quilting my backlog of tops. However, life got in the way once again and it got shelved once more. Finally after yet another move, it came down off the shelf and got quilted, bound, and is now FINISHED!!!!! 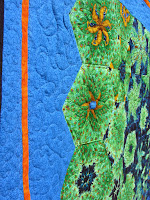 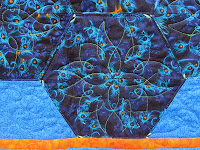 I used a lovely tulip stencil that fit perfectly into each of the design blocks, along with 1/8" ditching bordering each block. For the borders I followed the lead of the swirly print and did large scale swirls, leaving the little orange border alone except for ditching. All of the quilting was done with Aurifil #50 in coordinating blue & green. When it came time to bind it, I had planned on using the same blue as the borders; however, that left over fabric is long gone in two moves and ended up who knows where. So, a trip to the quilt shop to look for new binding. I chose to go with the deep blue that matched the background of the main fabric to frame it. I an so happy with how it turned out! 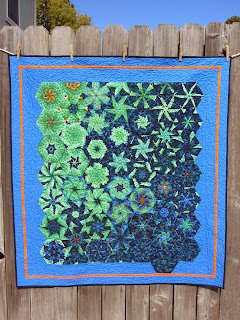 It's nice to see the pile of UFOs on the shelf shrink. However, just this week I started three new tops, so hopefully they won't have to sit as long as some of these that are still waiting to be quilted.

Posted by Elizabeth at 1:44 PM

Email ThisBlogThis!Share to TwitterShare to FacebookShare to Pinterest
Labels: Aurifil 50, One Block Wonder